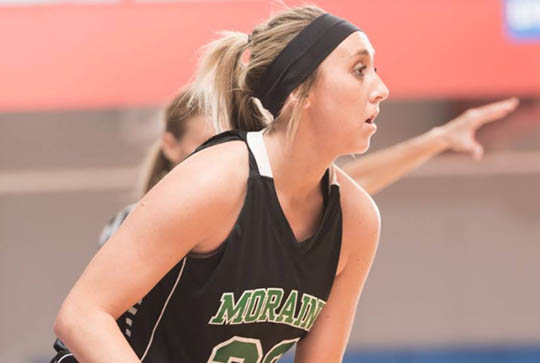 Moraine Valley versatile 5'10" guard/forward Katie McGann will continue her education and basketball career at IU Northwest beginning in this fall and join the RedHawks for the upcoming 2014-15 season. This past season as a sophomore, McGann was the Cyclones second leading at 11.2 points per game while leading the Cyclones to a 22-11 record and birth in the Region IV title game.

McGann ranked in the top ten nationally in the NJCAA with 77 made three-point attempts (35.3%) en route her First Team All-Skyway Conference Selection and First Team All-Region IV First honors. McGann registered a career high 32 points including 24 second half points and 8 three-point field goals in a narrow 77-76 loss to South Suburban on Jan. 18.

Later that same season, McGann and the Cyclones would get revenge tripping up South Suburban 71-70 in a overtime thriller on March 2 in the Region IV semifinals as she poured in 6 more triples en route to 24 points and 11 rebounds. McGann earned second team All-Skyway honors in her first season with Moraine Valley in 2012-13. McGann connected on at least 3 three point field goals in a game 13 times in 2013014 and scored at least 9 points in 23 of the Cyclones 33 games this past season.

"Katie brings very valuable experience particularly in big games and was extremely well-coached at one of region's top junior college programs in Moraine Valley. At 5'10" she fits extremely well the long, athletic backcourt we have. Katie's versatility to also play in the front-court coupled with the accuracy of her long range shooting will allow us to stretch opposing defenses, she someone that has to be accounted for at all times when she's on the floor. She's a great addition to our team" said IU Northwest Head Coach Ryan Shelton.

Mcgann will study Radiology and wear #21 for the RedHawks beginning this fall.