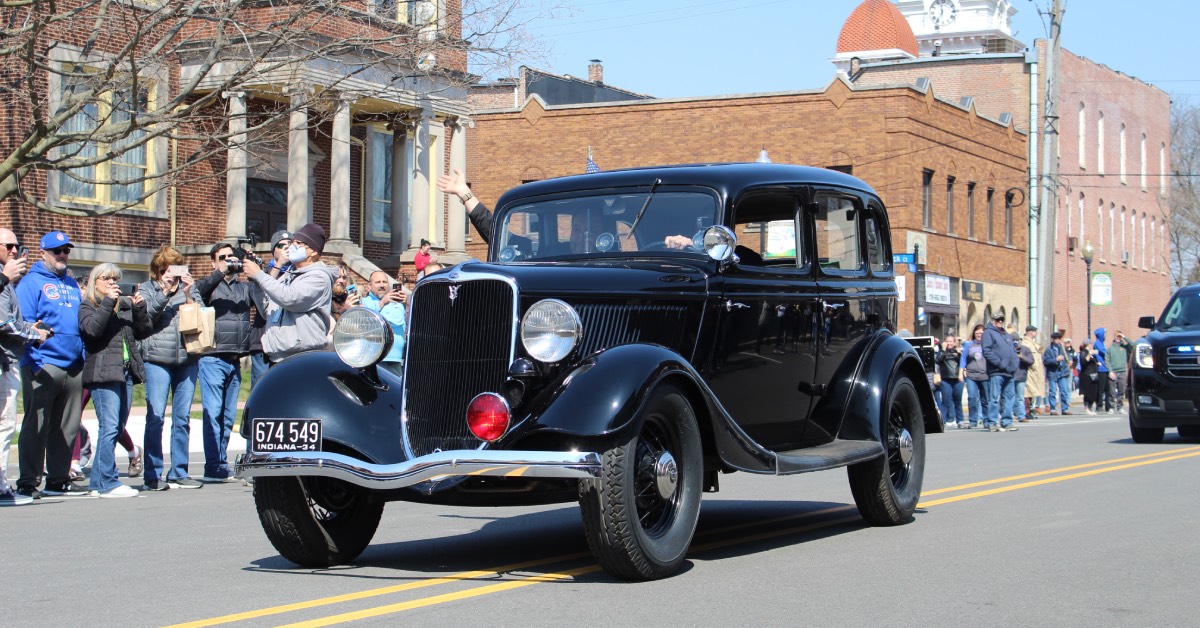 A piece of Region history was returned to its rightful home in Crown Point on Saturday morning when Sheriff Lillian Holley’s car, first stolen by John Dillinger and then lost, was delivered to the Old Sheriff’s House by a parade of Sheriff’s deputies and police officers.

Holley is something of a local legend, pressed into the role when her husband, the previous sheriff, was killed in the line of duty. The parade, which her family observed, was as much a tribute to her as it was a celebration of an iconic moment in American history.

“She took over with an iron hand and ran the jail like it should’ve been run” said James Emerson, board member at the Old Sheriff’s House Foundation. “Sheriff Holley was well-loved by the community; if the clock went out at the courthouse, she’d pay to have it fixed. This is so important to the city, and to the life of the Old Sheriff’s House organization”

The foundation is responsible for managing and restoring the Sheriff’s house. When Holley was sheriff, the facility was adjoined to a maximum security jail that contained 150 cells and was widely touted as escape-proof. Dillinger, who was placed into Holley’s custody to await trial for the murder of Officer Patrick O’Malley, proved that wrong when he made his infamous jailbreak.

The notorious bank robber either carved himself a fake pistol or was smuggled a real one, and he used it to take a hostage and escape the jail during morning exercises. He then went up the street and stole Holley’s car from a nearby garage where it was undergoing maintenance. He fled down Main Street and eventually escaped into Illinois. He continued his crime spree before eventually being killed by federal officers in Chicago. Some of his family members, including his nephew and great nephew, were on-hand to see the vehicle returned.

“All the different bloodlines from all the relatives are here to celebrate this moment, this vehicle coming back to its home,” said Travis Thompson, Dillinger’s great nephew, who has been a police officer for 19 years. “We don’t condone the things he did. I got into law enforcement because of him, trying to give the family name a better chance, from gangster to lawmen.”

The vehicle went through a long journey after Dillinger abandoned it in Chicago. City police impounded the car and later sold it at an auction to a Milwaukee man. He eventually moved to Maine, where it sat for many years.

Mark Love, an Arizona resident and Dillinger historian, spent years tracking the vehicle and even identifying fakes. Eventually, the Maine owners of the vehicle plated the car, which let Love track it down via its VIN number, restore it to its original condition, and bring it home 87 years later.

“Mark travelled all over the Midwest, chasing the smallest lead, eventually hiring a detective to aid him,” said Roger Pace, a Crown Point real estate agent who worked with Love and the Old Sheriff’s House Foundation to bring the car home. “What you see before you is the most historically significant escape car in the country. In bringing this car back, Mark had two requests: respect Sheriff Lillian Holley and respect law enforcement.”

Holley fell under intense scrutiny after Dillinger’s escape, which Pace noted she weathered with fireproof tenacity until she was absolved of any blame after a long investigation. Thompson noted that Holley’s vehicle even played a role in his eventual fall to federal agents.

“If the vehicle wasn’t taken across state lines, the FBI would’ve never gotten on the case,” he said. “To be here as a family and see this car returned to its rightful place after our uncle and great uncle took it is a big deal to us.”

Interest in the vehicle is nationwide. Discovery Channel was on hand to film the car’s arrival, and television presenter Josh Gates rode in the vehicle with Love during the parade. He and his crew will be filming throughout the City of Crown Point for a Discover Channel documentary throughout the weekend.