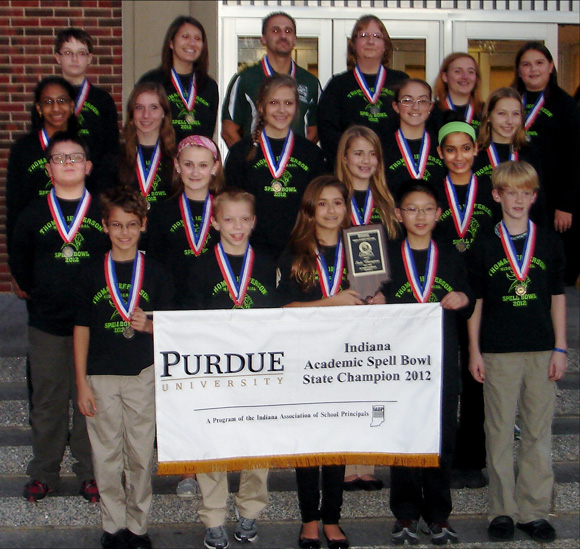 The Thomas Jefferson Middle School Spell Bowl team captured its sixth straight Class 2 Spell Bowl State Championship on Saturday, Nov. 10, at Purdue University. The TJ spellers did not miss any words during the eight rounds of competition, and their final score of 72 was the state-high score.

When asked how she had benefited from her involvement with the Spell Bowl team, 3-year member and Team Captain Olivia Rosario responded, “ I learned to always say, ‘Excuse me’ when I had an eructation, and to always osculate my mother when I said, ‘Good bye. ‘ “It’s fun!” remarked Rayna Johnson, a 3-year member of the team, when asked why she has participated throughout her middle school career. First-year member Hannah Lopez enjoyed the 7 AM daily practices because, “the sentences were funny, and the coaches are GREAT!” Joey Lavalley, a 2-year speller, quipped, “I like to know that my life is ‘spelled’ out before me!”

Team TJ has brought home the state championship banner 9 out of the last 11 years, but this is the first time the team has scored a perfect round at both the Area qualifying meet and the State Championship competition.

Mr. Jim Polite, principal of TJMS, was on hand to present the championship banner, medals, and plaque to the winners. Coach Jane Strayer, whose birthday always falls around the time of the state meet, asks the team for a blue birthday present each year. The team promised her they would deliver, and they most emphatically did!