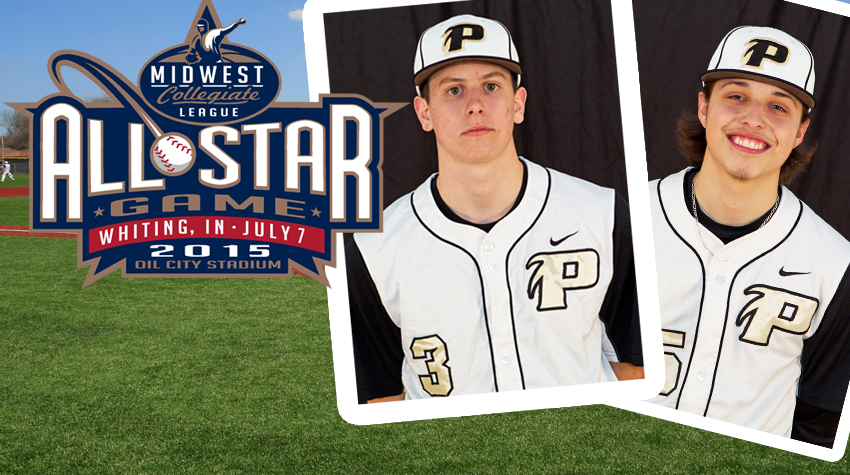 For their stellar play during the first half of the season, Purdue University Calumet baseball pitchers Jimmy Skiff and Matt Sandoval will represent the Peregrines in the 2015 Midwest Collegiate League All-Star Game, set for July 7 at Oil City Stadium in Whiting.

Skiff (Dyer, Ind./Andrean), who completed his freshman season for Purdue Calumet this past spring, has come on in a big way in his role as a starter for the first-place Northwest Indiana Oilmen (13-6), as he holds a team-low 0.47 ERA in 19.1 innings pitched. He adds 17 strikeouts and has allowed just one earned run in three starts and two relief appearances.

“I feel like (weight) lifting has helped me a lot,” Skiff said of his strong start. “I’ve gained a couple miles per hour on my fastball and my curveball has gotten better.

“I can utilize those pitches and mix it up.”

Sandoval (Highland, Ind./Bishop Noll), who will enter his junior season for the Peregrines in 2015-16, has also had a solid start for the Southland Vikings, where he carries a 1.50 ERA in 19 innings pitched. Sandoval has started four games and struck out 11 for the Vikings, who stand at 6-11 overall.

“I just credit it to working out every day, and my pitching coach for Southland Vikings, Marvin Freeman, has helped me a ton,” Sandoval said. “Having all his experience and his knowledge has been extremely helpful.”

Both Skiff and Sandoval will represent the South All-Stars, who will take on the North All-Stars beginning at 7 p.m. at Oil City Stadium in Whiting, Ind. The two squads, made up of players from the six teams of the Midwest Collegiate League, feature 20 NCAA Division I players as well as players from the NCAA D II, III, NAIA and NJCAA levels.

The two take pride in the fact that they are the only Purdue Calumet players in a league full of guys competing at the highest collegiate level.

“It means a lot,” Skiff said. “Around here, everyone wants to go D1, and us two NAIA pitchers coming out and facing all these guys – it’s a little intimidating at first, but it goes to show you that we can play with anybody.”

Added Sandoval: “It really brings out that competitive edge (in us).”

The MCL is a summer collegiate wood bat league made up of the Michigan City Lakers, the DuPage County Hounds, the Joliet Admirals, the Lexington Snipes, the NWI Oilmen and the Southland Vikings.

Tickets for the game are $12 and proceeds will benefit the American Cancer Society. Tickets can be purchased at the gate or online at http://nwioilmen.com/tickets/single_game/. Oil City Stadium is located at 1700 119th Street in Whiting. For more information, fans can visit http://www.nwioilmen.com.