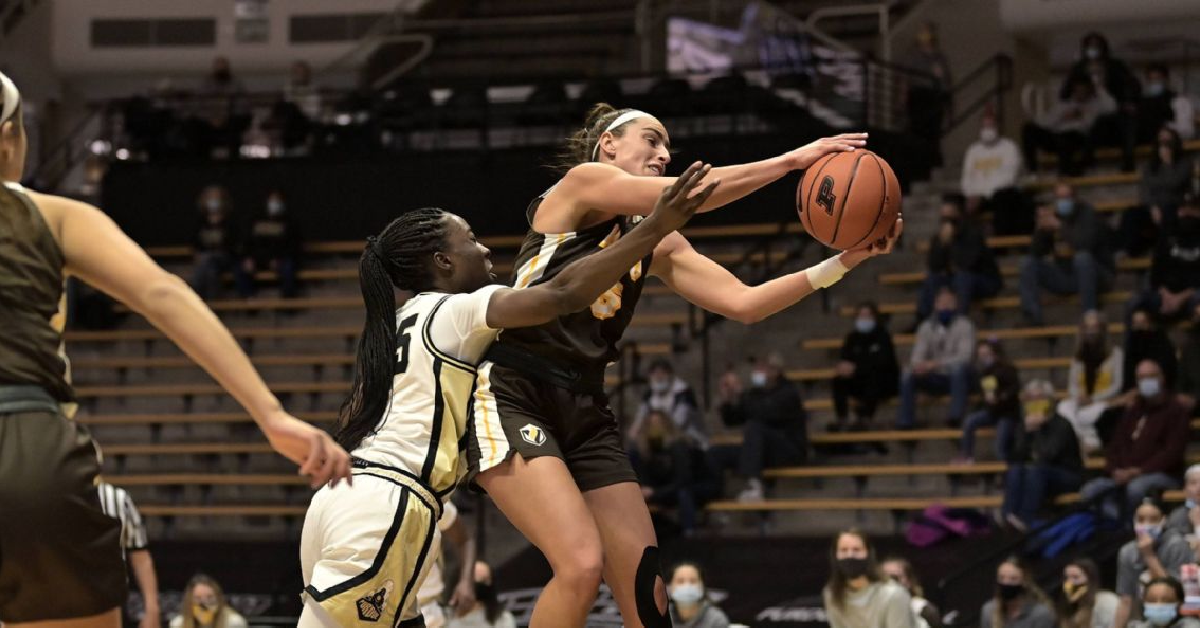 It might seem like déjà vu, but this was real life — Wednesday’s win apparently felt so good for the Valpo women’s basketball team that they decided to do it again Sunday afternoon. For the second time in five days, Valpo went on the road to a Big Ten team and came away victorious, this time taking down Purdue in West Lafayette by a final score of 52-47. Senior Grace White (Redby, Minn./Red Lake [Denver]) came up with key baskets on back-to-back possessions in the final 75 seconds after Purdue had cut the lead to one point to help secure the win.

-        Entering the fourth quarter with a five-point lead, Valpo traded a bunch of baskets with Purdue over the first four minutes of the period, outscoring the Boilermakers 10-8 over that stretch.

-        Purdue missed on its next trip, and again it was White making the big play in a close game, this time getting her defender to the ground and driving for an easy layup with 44 seconds to play to make it a five-point margin.

-        Valpo forced four Purdue misses from the floor over the final 44 seconds, with a free throw in the final seconds accounting for the only point the Boilermakers scored in the final minute.

-        White got out to a strong start to the game, scoring seven first-quarter points as Valpo led 11-4 at the end of one. The Brown and Gold held Purdue scoreless over the final 6:59 of the period, a stretch in which the Boilermakers went 0-of-8 from the field and committed six turnovers.

-        Purdue scored the first four points of the second quarter to start a period which would be close throughout. Valpo eventually went the last 4:21 of the quarter without scoring, and Purdue took an 18-17 lead into halftime on a putback just before the first half buzzer.

-        Valpo extended its advantage in the third quarter to seven points on a 3-pointer from sophomore Cara VanKempen (Coopersville, Mich./Coopersville) with 1:02 to play in the quarter and eventually carried a 32-27 lead into the final 10 minutes.

-        Sunday was the second win in program history over Purdue, and the first since dropping the nationally-ranked Boilermakers at the ARC on Dec. 10, 2008.

-        Combined with Wednesday’s win at Illinois, Valpo has defeated multiple Big Ten teams in the same season for the first time in program history.

-        Valpo is now 6-3 in true road nonconference games over the last two seasons, and is 11-5 in games decided by five points or fewer in the tenure of head coach Mary Evans.

-        White again paced Valpo, matching her career high with a game-best 20 points on 9-of-14 shooting. Dating back to last season, White has led Valpo in scoring in five consecutive games. The senior also grabbed a team-high eight rebounds.

-        VanKempen joined White in double figures, scoring a career-high 10 points — all of which came in the second half.

“I am really excited for the young women in our program, especially our juniors and seniors. They have bought in from day one to our offensive and defensive systems and have worked to improve as players both physically and mentally. Days like today help validate all the hard work that they have put in.”

“I thought today was probably the best game we have played on the defensive end since I took over the program. They were collectively focused on our game plan and did an amazing job talking and communicating with each other. Every player that played today came in and did their job. I am so happy for them right now.”

“Our team did a really good job responding to the 7-0 run that Purdue went on down the stretch. They stayed together and Grace came up with a couple big baskets late. I think we did a good job finishing the game and getting the shots that we wanted. Some of them fell and some didn’t, but we got the shots we wanted and really did a tremendous job with clock management at the end of the game. That speaks to our individual and collective maturity.”

“Every player contributed to getting this win. Leah and Lauren came off the bench and really helped us with defense and rebounding. Cara and Carie made some big 3’s down the stretch. Caitlin and Ella did a tremendous job playing with their feet and frustrating their bigs. It was truly a team effort!”

Valpo (2-1) closes out a four-game stretch away from the ARC to open the season on Tuesday evening at Miami (Ohio). Tipoff from Oxford is set for 4:30 p.m. CT.