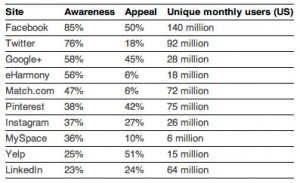 Social media has become a daily habit or necessity for most people. We feel the need to be plugged into Facebook, Twitter or some other site 24/7 to stay connected with the world around us, but do you trust the social media sites that you use?

This survey also produced other interesting data, including insights into online dating sites. Two online dating sites, eHarmony and Match.com, were among the highest ranked social media sites in terms of awareness, but they had the lowest appeal. E-Score says that this indicates “consumers’ displeasure with the process of using social media to find a companion.”

E-Score also found that the use of Twitter and Facebook seemed to be more out of habit or necessity since they are highly recognized and have a high number of monthly unique visitors, but have low appeal.

With people losing appeal for social media sites, could we be seeing the downfall of social media? Or will a new player come into the mix to keep social media from dying?