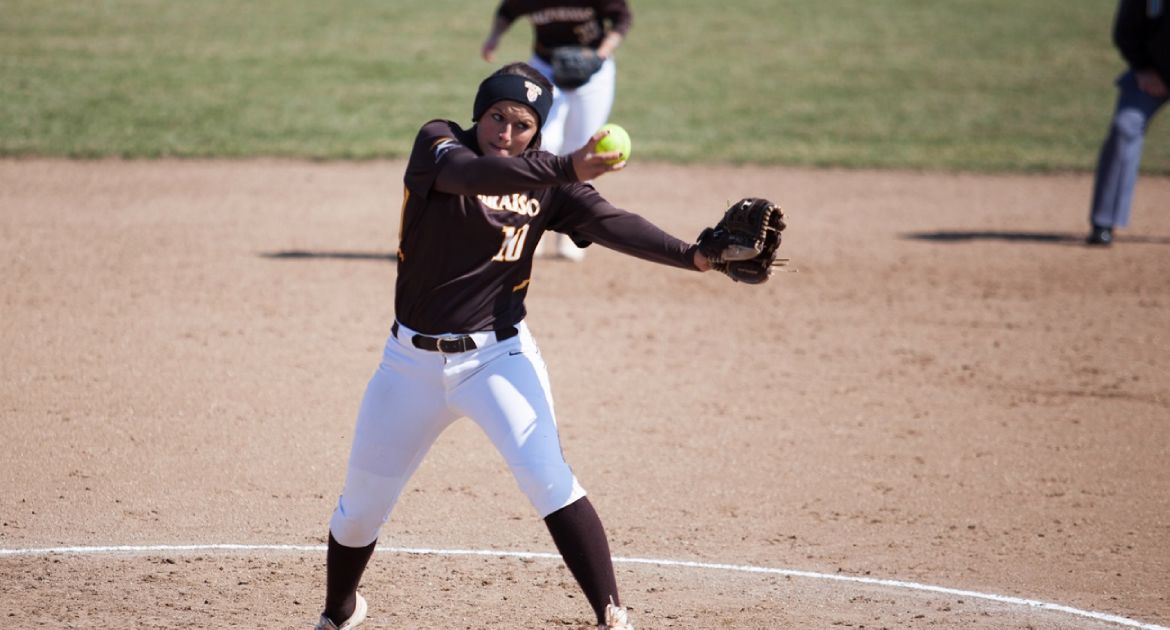 Next Up in Crusader Softball: The Valparaiso softball team continues Horizon League play this weekend as the Crusaders host Wright State in a three-game series at home. The series has been shifted a bit due to weather, as the two squads are now slated to play a doubleheader Saturday at 1 p.m. and a single game Sunday at 1 p.m.

Previously: The Crusaders opened up Horizon League play last weekend at home against defending league champion Green Bay, but despite scoring 19 runs over the three games, Valpo was able to come away with just one victory, as a 10-2 win was sandwiched by 7-2 and 12-7 defeats. The Crusaders’ scheduled mid-week twinbill with Central Michigan was canceled due to snow on the field.

Following the Crusaders: All three games this weekend tournament are slated to have live stats and live audio. Links for the live coverage will be available at ValpoAthletics.com.

Head Coach Kate Stake: Kate Stake was hired as head coach of the Valparaiso softball program on July 23, 2014 and owns a 7-16 record in her first season as head coach. Stake arrived at Valpo with eight seasons of assistant coaching experience at the Division I level, most recently serving as an assistant at mid-major power Hofstra.

Series Notes: Valpo split four meetings with Wright State in 2014, going 1-2 on the Raiders’ home field during the regular season before defeating WSU, 4-0, in the 2014 Horizon League Championship. The Crusaders own a 21-12 advantage in the all-time series. Taylor Weissenhofer has been impressive against the Raiders in her first two years, going 4-1 with a 0.68 ERA in six appearances and striking out 38 batters in 30.2 innings of work.

Crusaders Picked Third in Preseason Poll: Valparaiso was picked to finish in third place in the Horizon League standings in 2015 in a very tight preseason poll, as picked by the league’s head coaches. Wright State, despite earning just one first-place vote, topped the polling with 40 points, while Green Bay picked up three first-place votes and 38 points. The Crusaders were just one point behind the Phoenix and tallied two first-place votes. Youngstown State recorded the other two first-place nods and finished fourth in the polling.

Weather Wreaking Havoc: Last weekend’s Horizon League opening series with Green Bay was the first time since the opening tournament of the season that Valpo has not had a schedule change due to weather. The Crusaders had one early-season tournament canceled due to weather, leading them to add games in Florida, and two other early-season tournaments had games shifted around. The return to Indiana hasn’t been smooth either, as both scheduled mid-week doubleheaders have been canceled - one due to the opponent needing to make up league games, the other due to snow.

Starting With the Best: The Crusaders are jumping in feet-first to Horizon League play this year. Last weekend brought the defending league regular season and tournament champions to Valpo in Green Bay, while this weekend, Wright State comes to town - the preseason league favorite and second-place finishers in the regular season standings last season.

Eight for Eight: Junior Kaitlyn Ranieri enjoyed a perfect day at the plate last Saturday in the Crusaders’ twinbill against Green Bay. In game one of the doubleheader, Ranieri singled in each of her first three plate appearances before walking her final time up. Then, in game two, the junior walked each of her first three times at-bat before capping the day with a two-run homer in her last plate appearance.

Moving Up the Charts: Ranieri’s stellar performance through the first half of the season (.400/.560/.717 slash line; 16th in nation in walks [21]; 32nd in on-base pct.) has seen her moving up Valpo’s career charts in a number of offensive categories. The junior currently ranks in the top-five in Crusader history in average, on-base and slugging, and is fourth all-time with 79 career walks. She has also recently cracked the top-10 in home runs (t-8th, 13), hits (t-10th, 152) and runs scored (t-10th, 91).

Prowess Up and Down the Order: Ranieri is merely the leader of a much improved offensive team this season. As a team, Valpo is batting .310 on the season - just two points shy of the Crusaders’ single-season record in the category. Of the five regulars on this year’s team who were on the squad last year, Ranieri’s 30-point improvement in batting average is the least improved average, as the other four (Lawson, McShane, Calombaris, Norway) all have improved by at least 67 points.

Moreno Steps In at Short: Replacing a four-year starter at shortstop, freshman Stephanie Moreno has put her stamp on the position halfway through her rookie year in an impressive fashion. Moreno, one of just two Crusaders to start every game at the same defensive position in 2015, leads all Horizon League freshman with a .381 batting average and is second among league rookies with a .458 on-base percentage. She has reached base in each of Valpo’s last eight games as well.

Montgomery Finding Her Groove: Freshman Ashlyn Montgomery found herself with an ERA over nine through her first ten collegiate appearances, but has been much better of late. Montgomery, who leads the league and ranks among the top-40 nationally in fewest walks per seven innings, has seen her ERA drop over three points over her last five outings, going 3-1 with a save and a 2.86 ERA over that span. Last time out, she registered a win in her first career Horizon League game, going the distance in Valpo’s 10-2 win over Green Bay.