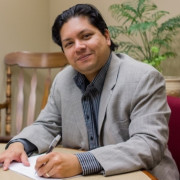 Indiana University Northwest’s Kalim Shah, Ph.D., assistant professor of environmental policy, has been selected as one of about a dozen experts who are drafting the GEO-6 section on Latin America and the Caribbean. Even more commendable is the UNEP decision to have Shah lead the drafting of the section.

In total, the effort will comprise almost 300 internationally recognized environmental policy and science experts from academia, government and civil society, as well as experts within the UN system. Choosing experts for the GEO-6 is a selective process, with professionals nominated by UN agencies, inter-governmental or governmental entities who are then screened by the UNEP before they are offered this esteemed international service role. Shah had previously completed several consulting projects with various UN agencies such as the UN Economic Commission for Latin America and the Caribbean. He is also well published in the field of environmental policy in that geographic region.

Since March, Shah has been meeting with his expert panel team at the UNEP Latin American and Caribbean (LAC) headquarters in Panama to draft the report. In September, he travels to UNEP global headquarters in Nairobi, Kenya, where he will meet with experts from all the other geographic regions to share ideas and research, align section reports and finalize the GEO-6 report.

“It will be critical to convey in the report the need to come to grips with the serious environmental challenges the region faces as well as put the countries in position to leverage new technologies, tools and system approaches that could contribute to sustainable development,” Shah said.

Shah said he is humbled by the opportunity to collaborate with globally recognized experts who specialize in environmental issues pertaining to air, water, land, oceans, climate and biodiversity – all of whom he will heavily depend upon to finalize their report.

“The reality of climate change is going to be a hot button issue in this report as far as Latin America and the Caribbean,” Shah said. “Issues such as the loss of forests and biodiversity, pollution and expanded agriculture in the region and exacerbated extreme weather events such as hurricanes, flooding and drought have to be highlighted.”

He adds, “This report will be launched in 2016 and is the first after the official launch of the UN Sustainable Development Goals later this year. This will represent an evolutionary paradigm shift for global environmental efforts towards 2030 goals of low carbon development, green economies and sustainable production and consumption. The GEO-6 will therefore be one of the first advisory documents that governments will look to for guidance. We are definitely looking at aligning our report in that regard.”

Shah moved to the U.S. in 2003 as a Fulbright Scholar and eventually earned his doctorate in Public Policy and Environmental Science from George Mason University in Virginia. He grew up in Trinidad and Tobago in the southern Caribbean and much of his research today is still focused on sustainable development of the region.

Over the summer, he was invited to be a visiting research scholar at the University of the West Indies in Barbados where he worked with colleagues there on mainstreaming climate change into disaster risk reduction and management strategies, a topic for which he received an IU Northwest Summer Research fellowship to pursue.

Shah notes that he is constantly seeking avenues to make a difference, especially in the policy field. He remembers his first job experiences analyzing samples in an environmental lab and then his urge to be out in the field working with other disciplinary professionals on environmental impacts assessments of infrastructure projects. He saw the reality that environmental protection was often not at the top of the agenda for developers or industry and thought that he might be able to tackle such challenges from a policy standpoint.

“If you can influence policy,” he said, “then you set the foundation for regulatory frameworks that developers, industry really have to take seriously.”

Shah says that up until this point, he viewed his work as akin to placing dots on the board of the entire body of knowledge in his field. And while there is definitely virtue in simply making a dot on the board, it is particularly gratifying to be able to draw a line and begin connecting the dots.