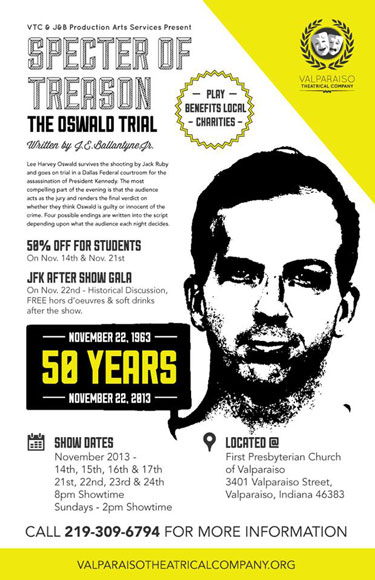 President John F. Kennedy was assassinated 50 years ago this year. To mark this event VTC presents: Specter of Treason-The Oswald Trial in November of 2013.

Written by J.E.Ballantyne, Jr., the concept of the play is that Lee Harvey Oswald survives the shooting by Jack Ruby and goes on trial in a Dallas Federal courtroom for the assassination of President Kennedy. A cast of 50 characters brings this drama to vivid life onstage. But the most compelling part of the evening is that the audience acts as the jury and renders the final verdict on whether they think Oswald is guilty or innocent of the crime. Four possible endings are written into the script depending upon what the audience each night decides.

NOTE TO ALL STUDENTS: There are two student night performances, anyone with a student ID will get 50% off the $10.00 ticket price! Those nights are Thursday Nov. 14th. and Thursday Nov. 21st. starting at 8PM.

JFK AFTER SHOW GALA: Adding even more significance to the performance will be the JFK After Show Gala on Friday, November 22, 2013; fifty years to the day that the assassination took place. There will be a cast discussion about the show along with hors d’oeuvres and soft drinks. The show will run for a total of two weekends,opening Thursday Nov. 14th. closing on Sunday, Nov. 24th.