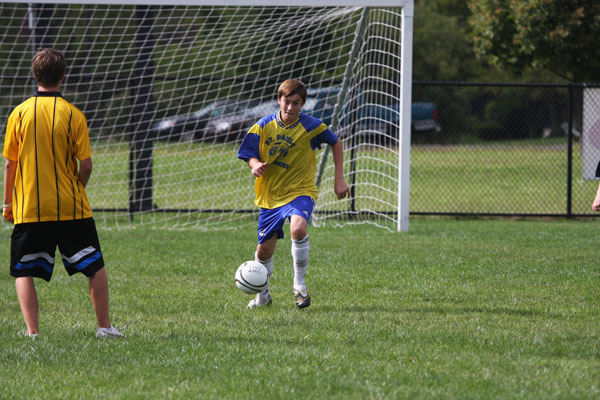 The 7th-8th grade St. Paul Panthers soccer team handedly won their games this past weekend against St. John the Evangelist and Hanover, winning by scores of 11-2 and 10-2, respectively. In both games, the Panthers came out scoring in the first few minutes, and controlled the pace throughout the games. Against St. John, Evan Fogle, Andrew Page, and Thomas Walsh were responsible for much of the shooting and scoring, though with plenty of help for their teammates, including assists from Nina Hartman and Gareth Kaye.

The Panthers had twenty-eight shots on goal, while Panther goalies Patrick Azar and Daniel Barajas had five saves between them. A footnote to this game was that St. John was unable to roster a full 7th-8th grade soccer team this year, with the result that most of their players were 5th and 6th graders.

Against Hanover, the shooting and scoring was spread out among six Panthers, with assists also coming from six Panthers. Hanover had very skilled players who were able to exploit several momentary lapses in the Panther defense, but otherwise it was all Panthers in terms of time of possession. The Panthers had twenty-four shots on goal against seven from Hanover. Panther keepers Patrick Azar and Kaitlyn Kras had five saves.

The 7th-8th grade Panthers are currently 3-1, and have two games the weekend of October 10 and 11 against Bishop Noll and St. Thomas More. Both games will be held on the St. Michael’s soccer field.