Indiana State Senate Budget Committee examines the value and ROI of the RDA. 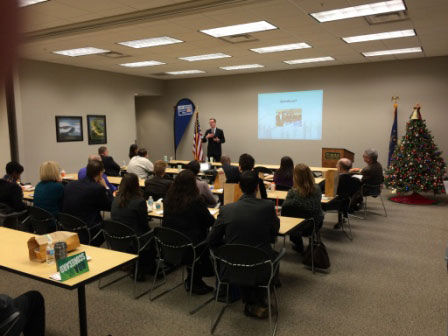 RDA President and CEO Bill Hanna had an opportunity to speak this morning to a group of leaders from the Lake Area United Way about the case for continued state investment in the Regional Development Authority. The meeting came just a day after Hanna was in Indianapolis to speak to the Indiana Senate Budget Committee on the same subject.

Since its creation in the middle of the last decade, the RDA's funding has included an annual $10 million contribution from the state, in addition to $17.5 million from local sources in Lake and Porter counties. The state's contribution is set to expire after 2015. However, the value created by the RDA in its first ten years as well as the future benefits to the state in the form of increased revenues form a strong case for continued state involvement in the RDA:

A 2012 return-on-investment analysis, also prepared by Policy Analytics, showed the RDA had committed $211 million to infrastructure and other projects, which had attracted $540 million in federal, state and local investment.

When the effects of RDA direct spending, construction employment, new jobs created and secondary impacts are added up, the RDA has had a cumulative economic impact of more than $1.1 billion in its first decade.

That impact will swell in coming decades, as projects already completed continue to attract investment and new ones come online, according to the new Policy Analytics study. By 2033, the overall annual economic output generated by RDA projects will amount to $6.4 billion annually. That works out to $14 of impact for every $1 in RDA investment.

In the coming years, the RDA plans to accelerate its efforts to fully capitalize on northwest Indiana's proximity to Chicago. The city is the third-largest metro economy in the United States, behind New York and Los Angeles, and there are more jobs in the Chicago Metropolitan Statistical Area than there are in the entire State of Indiana. For more details on our accomplishments and goals, read our budget request letter to the state.