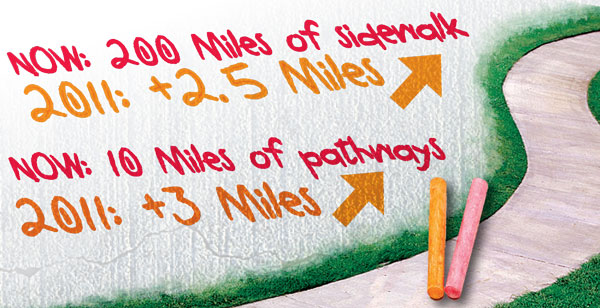 They connect us to schools, to stores and to neighborhoods. Valparaiso has made its sidewalks and pathways a priority, adding and replacing more than six miles this year alone. “Over the past several years we’ve worked hard to find grants and ways to stretch our sidewalk dollars, doing as much as possible in-house,” said Mayor Jon Costas. “These days we’re able to do about four times as much sidewalk work as was done in the past,” he said.

This year’s projects include improvements to downtown sidewalks, radiating from the new Central Park Plaza, as well as a new pedestrian access at the county parking garage. As part of the downtown park project, the city’s Redevelopment Commission is funding these walkways. Other sidewalk upgrades include portions between Lincolnway and the Grand Trunk tracks. In all areas, curb ramps are being added, making the city more wheelchair accessible

School zones have also been targeted for sidewalk improvements, funded entirely by more than $465,375 in grant funding from the Indiana Department of Transportation. Once complete, this grant funding will provide more than 11,700 feet of walking routes surrounding Parkview, Memorial and Cooks Corners elementary schools. “Better sidewalks mean more kids can walk to their neighborhood schools and neighborhoods become closer. We’re really pleased to find ways to make that happen,” said Costas.

In addition to 200 miles of sidewalks, the city also maintains more than 10 miles of pathways and will add three more miles this year, including an eight-foot wide pathway on the north side of Lincolnway from Campbell to Napoleon and an eightfoot wide pathway along the west side of Silhavy Road from Pebble Beach to LaPorte Ave.

The Pathways network has grown from two miles in 2003 to 10 miles in 2011. Each new pathway segment becomes a part of the linear Valpo Parks system and is maintained by Valpo Parks. “As a Fit City, we’ve made these pathways a priority and we see people enjoying these paths at all times of day in all types of weather,” said Costas.

With more than 200 miles of sidewalks to maintain, the city must prioritize which sections to replace first, giving first attention to safety concerns and areas with higher pedestrian traffic. However, the city does offer a sidewalk program for residents who wish to have their sidewalk replaced more quickly. Under the program, residents may purchase concrete at the city’s rate when choosing a qualified subcontractor to complete the work. Call Public Works at 219.462.4612 for details.

“Thank you! Thank You! The sidewalks are extra wide and flat and they even have slabs for traction at the curbs. Unless someone walks everywhere, I think it’s hard to understand what a huge difference sidewalks make [for a wheelchair user]." —Jocelyn, Valpo resident