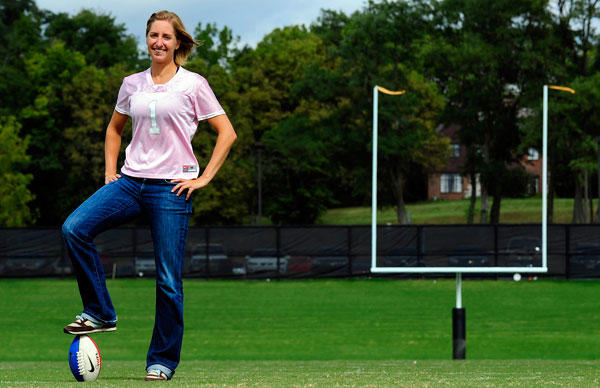 Just like Lucy pulling the football away from Charlie Brown, kicking a football through goal posts can be an elusive task, according to Purdue University research.

"People trying to kick field goals will see a much smaller goal after unsuccessful attempts," said Jessica K. Witt, an assistant professor of psychological sciences who studies perception in athletes. "But those who kicked better judged the goal posts to be farther apart and the crossbar lower to the ground."

Golfers, baseball players and other athletes often report their targets look bigger on days they play well and smaller on bad days. This study affirms that performance influences perception.

The study is available online in the journal Perception at http://www.perceptionweb.com/abstract.cgi?id=p6325. The findings are based on the kicking performance of 23 non-football athletes who kicked from the center of the field at the 10-yard line.

"When you watch football, kicking that extra point after a touchdown looks so easy, and that kick is almost never missed," Witt said. "And when it is missed, then fans are in an uproar. But it's actually really hard to hit that target. Because of this disconnect, we thought this sport would give us the biggest effect to show how performance influences perception."

In a previous study, Witt asked golfers after a round of golf to report their scores and estimate the size of a golf hole. She found that those who played better saw the hole as bigger. In this football study, she asked the kickers to estimate the size of the goal posts before and after kicking. There was no correlation between performance and how the goals posts were viewed before kicking. However, perceived size of the goal posts after kicking was positively correlated with kicking performance.

This is an example of how action, in this case kicking a football, can bias perception, she said. However, some perception researchers are still resistant to such a claim.

"Most people think of perception as just being about information received by the eye," Witt said. "If that were the case, then perceived size should not have changed because the optical information specifying the size of the goals posts is constant. This research shows that perception is about more than just the optical system."

Witt next wants to examine if watching others perform can affect perception. If seeing others perform poorly makes the kicker see the goal as smaller, this also may affect the kicker's subsequent performance. In that case, during timeouts called to try to ice the kicker, home teams might benefit from showing replays of failed kicks.

"There are still a number of questions to answer about this work, including what role perception plays for professional athletes who practice the sport more than the average person," she said. "We would also like to know if there are ways, such as visualizing the target to be bigger, that can benefit athletes in their sport."

The study was co-authored by doctoral student Travis Dorsch, a kicker on the Purdue football team from 1998-2001. He was named an All-American kicker in 2001 and set Big Ten Conference career records for points scored and field goals. He also was drafted by the Cincinnati Bengals in the 2002 draft.

"Anecdotally, the study's participants were surprised at how difficult it was to make an extra point," said Dorsch, who is working on his doctoral degree in the Department of Health and Kinesiology. "Kickers, perhaps more than players of any other position, are self-evaluating and constantly thinking about what they themselves are doing and what's going on around them. Therefore, kickers, and kicking coaches, will be interested in learning about the cognitive aspects that can play into success on the field."

Witt's work was supported by the Department of Psychological Sciences and the College of Liberal Arts.