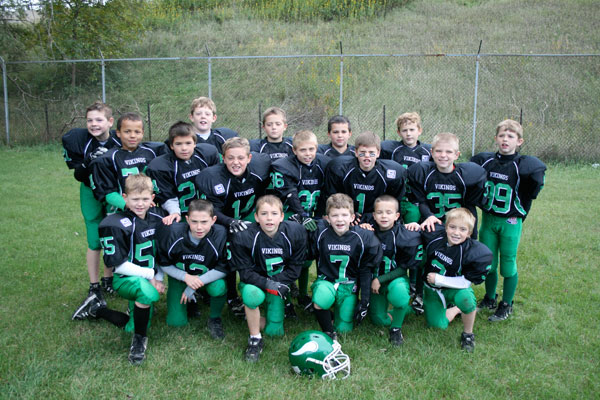 A typical day for an 8-year old would seem to be filled with 3rd grade classroom activities, fun on the playground with friends and riding bikes until dark…not for this group of young boys. Their weeknights and weekends are filled with bear crawls, sprints, push ups, sit ups and the ever constant crashing sound of helmets. This is one of Valpo Pop Warner’s five Junior Mitey Mite Teams, known as Team Bennett – who have just completed an undefeated season of football.

Pop Warner is a national football organization that stresses the importance of teamwork and not individualism, along with the value of succeeding in academics. Valpo Pop Warner has 800+ players from around the Porter County area. The Jr. Mitey Mite team, lead by Head Coach Brian Bennett, has shown every bit of what a Pop Warner team is all about. Players are required to maintain a minimum grade point average of 2.0 in school, in order to participate in the league. Their dedication to their team has proven to be outstanding! Rigorous weekday evenings give way to an after school schedule of three 2-hour practices for the players and every weekend focuses on a game (even in the rain and seasonably cold weather). It is not unusual to see an opposing player down during a game and to see this team reach out a hand and help them up off the ground. There are high fives on the field and continuous cheering from their teammates on the sidelines. Support amongst the players is unparalleled. Academic accomplishments are shared at the end of practice each week as players are able to share their good grades on tests and other activities with the entire team and attending parents. From the first week of August through the third week of October, this team of eighteen boys has played as one heart, striving to give their best for their team, exhausted from long school days, family obligations and painstaking practices.

The area Pop Warner teams they have encountered this season were known to be tough, including teams such as the Hammond Patriots, Tri-Town Raiders and the Michigan City Wolves. Even competing against such tough teams, their perseverance paid off game after game, only allowing 3 touchdowns from opposing teams during the entire 8 game season. Consisting of a mix of returning players who have been in the Pop Warner program for 3 or 4 years, there were also several boys on the team that had never played organized football until this year.

Along with Head Coach Bennett, the assistant coaches, Bob Aerts, Frank Galvin and Scott Otterbacher helped lead the team to a successful season through their guidance and commitment to the players. Team moms, Jen Abatie and Kathleen Bennett helped to organize the season through practice and game info and organized a team banquet held in the team’s honor last Sunday, October 18th at Casa del Roma. The team extends beyond the players and coaches to the families, who are required to attend all practices, games (rain or shine) and multiple events, such as a team pizza night, Parent Mud Bowls, Meet the Vike Night at Valpo High School, trips to DQ to celebrate accomplishments, only to name a few. All these events are set in order to instill good sportsmanship and team values.

Team Bennett, coming off of a losing streak season (winning only their Bowl game) in 2008, has shown what it takes to rise above, become a focused team and work toward an ultimate goal – an undefeated season and an invaluable life lesson of learning what it means to be a teammate and the importance of respect for others while working together.