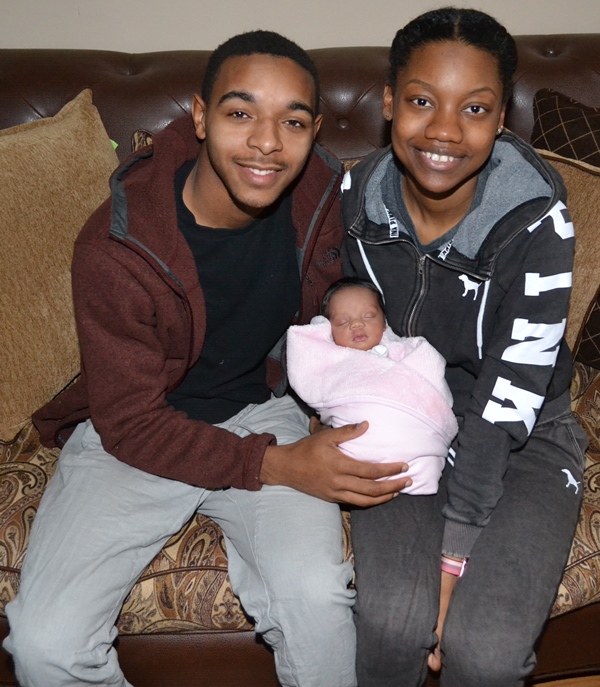 Khendall Jones recently gave birth to the first child born at Franciscan Health Hammond this year and in the process, was the recipient of a three-hospital teamwork of obstetrics and Neonatal Intensive Care Unit services.

Her daughter, Peyton, was born prematurely, at 10:07 a.m. Jan. 2. That set the wheels of teamwork into motion.

The Franciscan Health Crown Point Neonatal Transport Team, which is responsible for transporting all babies in Lake County for Franciscan, brought Peyton to the Level II NICU at Franciscan Health Dyer, while her mother remained at Hammond to recover for a few days.

They happily were reunited on day five and are at home now.

“They handed Peyton to me immediately after she was born in Hammond and let me spend time with her before she was transferred to Dyer,” Khendall said, adding, “At Dyer, the staff was great; they kept updating us on her progress and providing tips on feeding and nursing. They were very helpful.”

The baby’s father, Jarrad Bristol, arrived on Jan. 3, taking a leave from the Army, where the couple met about two years ago. Both are rocket launcher technicians. He is from North Carolina; Khendall from Calumet City, Ill., where they were staying while on leave. Jarrad has three years left to serve; Khendall, a year-and-a-half.

“If a baby requires transport our specially trained team from Franciscan Health Crown Point is called to transport that baby. We are especially lucky in that our neonatologists at all of our Lake County campuses are from the same physician group, so they work closely together and communicate well with one another,” she said.

That renovation is expected to be completed in early spring, Culver said, adding, “All babies that are born prior to 32 weeks or have significant health problems are cared for at the Level III Neonatal Intensive Care Unit located at the Crown Point campus.”