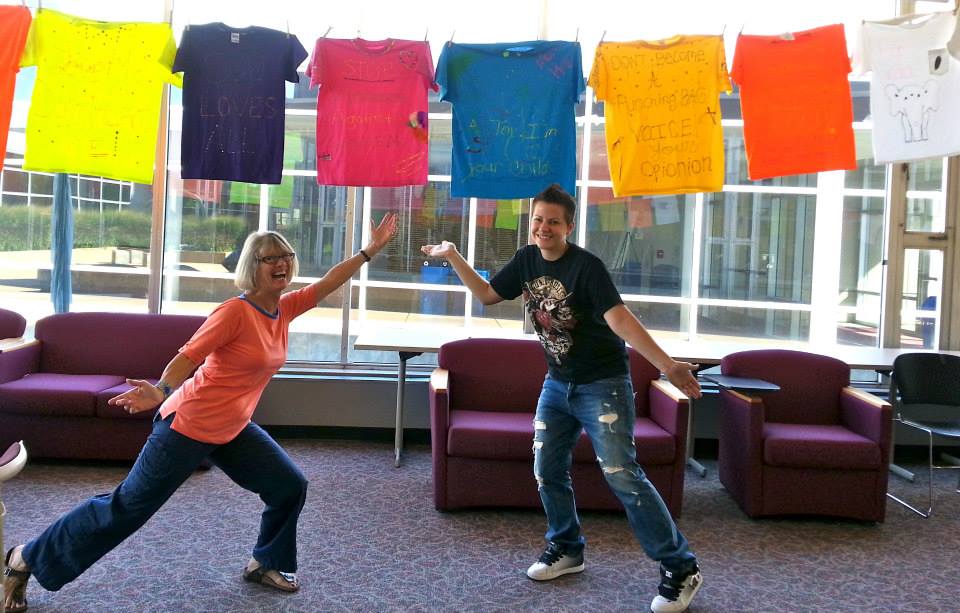 The Women’s and Gender Studies Program (WGS) at Indiana University Northwest invites the campus and greater community to view “The Clothesline Project” to be featured in the Moraine Student Center from October 2-12. The T-shirt exhibit is part of a national project intended to educate, break the silence, and bear witness to gender violence.

Hurt is a documentary filmmaker and his film, "Hip Hop: Beyond Beats and Rhymes," focuses on males and misogynistic masculinity. His presentation, “Locker Room Talk or Toxic Masculinity,” focuses on how hyper-masculinity normalizes male violence, and how positive male leadership can end gender-based violence.

IU Northwest is fortunate to have Hurt on campus during the Clothesline Exhibit, which is part of a broader WGS effort at IU Northwest intended to create awareness about violence and its prevention.

The idea behind the Clothesline Project comes from the fact that, traditionally, doing laundry was considered “women’s work.” This meant that women hung their clothes to dry while conversing with their neighbors, often about taboo domestic issues. Although it was once considered shameful to “air one’s dirty laundry,” the Clothesline Project is intended to raise awareness about gender violence and give expression to previously silenced voices.

The exhibited T-shirts are designed by IU Northwest students, staff and faculty as an expression of their personal stories or in honor of a survivor or victim, whether child or adult, male or female.

The T-shirts are color coded to demonstrate the prevalence and severity of various types of abuse::

• Yellow represents battering or assault survivors • Red, pink, and orange signify survivors of rape or sexual assault • Blue or green is for survivors of incest or sexual abuse • Purple or lavender stands for persons attacked due to their sexual orientation • Black represents those attacked for political reasons • White memorializes those who died from violence

“I have found that participants experience a therapeutic release as well as a sense of bonding as they create T-shirts that are exhibited alongside others who have had similar experiences,” said Tanice Foltz, The Clothesline Project organizer. “The Women’s and Gender Studies Program sponsors the exhibit to encourage students to break the silence about gender violence and reduce the shame associated with it, while connecting and empowering participants.”

For more information, contact Tanice Foltz, professor of Sociology and director of Women’s and Gender Studies, at tfoltz@iun.edu or 219-980-6786.

The Women’s and Gender Studies Program, the Department of Sociology and Anthropology and the Office of Diversity, Equity and Multicultural Affairs are sponsors of the exhibit.