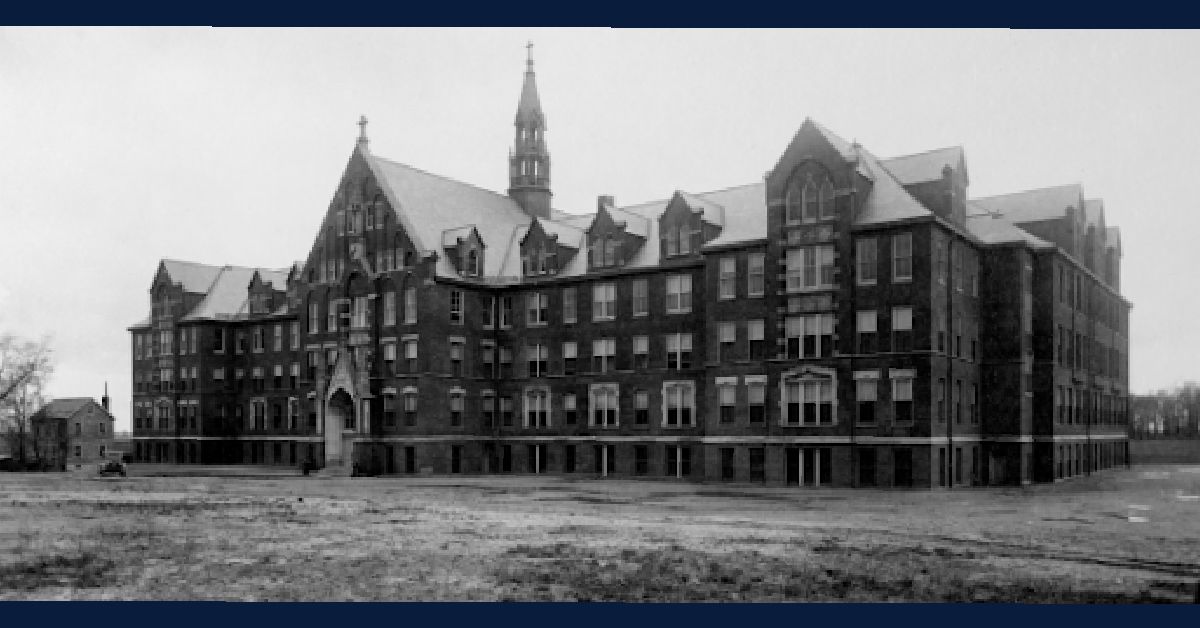 When Mother Tabitha turned the first shovel of dirt to break ground for the new Poor Handmaids of Jesus Christ (PHJC) Motherhouse on September 8, 1919, she could never have foreseen the magnitude, the impact, the ripple of service the Poor Handmaid Sisters were ushering into the Marshall County area and throughout the U.S. Had she, she may have preferred to use a steamshovel instead. While the Sisters preparing for the move from Fort Wayne to Donaldson dreamed of respite, peace, and solitude, it was not to be. They followed the Spirit wherever it led them in the service of God’s children.

With the move, the PHJC ministries expanded from nursing, care of children, and education in the early days to include care for the elderly, pastoral ministry, spiritual companionship, care of migrants, higher education, and meaningful employment for many in the area at the Motherhouse. That impact continues to this day.

Before the move, each postulant class dreamed that theirs would be the first to take their vows in the new Motherhouse but many delays ensued. Packing commenced and ceased on numerous occasions, with saying the word packing becoming verboten after it was halted again around Easter 1922. Finally, moving day came and the Sisters arrived by train in Donaldson in August 1922. At the 70th anniversary of the Motherhouse in 1992, Sister Mercedes Sheffield recalled that time in an article for Word Gathering, “the Sisters graduated from the Bucket Brigade to the Varnishers Union, and onto Window Washers, who had 800 panes in the new building for their challenge.” At the dedication of the Motherhouse in 1923, the Sisters welcomed 710 guests to celebrate Mass and followed by a luncheon.

Since 1900, the PHJC were already actively ministering in the area, serving at Holy Family Hospital in LaPorte; Saint Bavo and Saint Monica Schools, and Saint Joseph Hospital in Mishawaka; and Saint Mary School and Ancilla College in Donaldson. These were merely the local ministries. The Sisters were already serving in Chicago, Northwest Indiana, and Southern Illinois simultaneously.

February 16, 1918, Sister Catherine arrives at the Motherhouse in Fort Wayne unannounced. A patient at Saint Elizabeth’s Hospital in Chicago told Sister Catherine about a gentleman who was about to sell his summer resort situated on Lake Gilbraith, in Marshall County, Indiana. Not too distant from the Motherhouse, the resort was located in the same Diocese. Before returning to Chicago, Sister Catherine was promised that Mother Tabitha and Sister Seraphia would go to view the place the next day.

Mr. Glunz conducted Mother Tabitha and her companions through the hotel and over the estate of seventy-three acres. The resort included a roomy hotel, a chapel, a bowling alley, and several other buildings. To see the place in person was to desire it.

May 29, 1918, Sister Germana assumed charge of Retreat Saint Amalia as it was renamed. The purpose of the Retreat was to serve as a place of rest and of recuperation for tired and worn bodies; and as a place at which the sisters might assemble for their annual retreats.

June 19, 1918, Rev. Paulinus Trost, C.PP.S.,Chaplain at the Motherhouse at Fort Wayne, blessed the house and prepared for the arrival of the Holy Eucharist. The Rt. Rev. Bishop Alerding next presented the altar stone for the chapel. He expressed his delight at the acquisition made by the congregation. Soon he suggested the removal of the Fort Wayne Motherhouse to Retreat Saint Amalia. He states: “That is the place where the Poor Handmaids of Jesus Christ should have their Motherhouse. Mother Tabitha responds: “I am pleased to hear this proposal. Although I have had this in mind for some time, I have not as yet mentioned it to anyone.”

August 30, 1918, marked the fiftieth anniversary of the congregation of the Poor Handmaids of Jesus Christ in the United States. Membership was numbered at 602 living members. On the occasion of the Jubilee, the proposed move of the Motherhouse to Retreat Saint Amalia was announced by Mother Tabitha.

July 15, 1920, a large stone statue of our Blessed Mother underneath the title of Ancilla Domini was raised to its position, about eighty feet above the main entrance. Later in the day, Mount Carmel cemetery was also blessed.

August 30, 1922, the transfer of the Motherhouse from Fort Wayne to Retreat Saint Amalia occurred.

September 8, 1921, the blessing of the bells took place. Three bells varying in size were blessed. The largest bell was baptized Ancilla Domini, and the smallest one was named Catherine. The bells were a gift from Dr. Maurice Rosenthal, and as a token of appreciation, the medium-sized bell was baptized Mauritius.

May 24, 1923, the solemn dedication of the Motherhouse Ancilla Domini took place.

Dedicatory sermon of Motherhouse Ancilla Domini by Monsignor Rempe from May 24, 1923:

“...impress upon this house, upon its walls, upon its very substance, the image of her to whom this Community owes its origin. Remember your Venerable Foundress; remember her humility and wisdom. She lived to see, and we experience what He promised—to give mercy and compassion; that He extends His hands to those who seek Him; that He lends His strong arm to those who lean upon Him; and that he loves to choose the foolish things of this world to confound the wise, and the weak things of this world to confound the strong; and the things that are not, to bring to naught the things that are. If this spirit of your Foundress remains in this house, then this is your Motherhouse. It is the house of your mother whose spirit hovers over you, directs you, guides you, comforts you, and beckons you onward and upward to your eternal home where, with all His angels and saints, you may possess that God whom you have chosen as the portion of your inheritance.