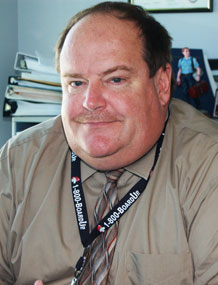 The second annual Don Hess Day, to honor the late, former longtime director of the Franciscan St. Anthony Health – Crown Point Emergency Medical Services Academy, will be highlighted by the presence of a man Hess is credited with saving about five years ago.

Don Satoski, of Crown Point, who had collapsed due to an undetected heart defect at the finish line of the city’s Hub Run and was attended to by Hess, who also was a paramedic; is scheduled to throw out the first pitch at the event, scheduled for 6:10 p.m. July 13 at the U.S. Steel Yard, prior to a Gary South Shore Railcats game.

Widow Lenore Hess said she received a letter from wife Joyce Satoski, praising Hess and expressing gratitude for his efforts.

“My husband was unresponsive and literally dead for about two minutes and your Don continued to work on him until he finally got a heartbeat,” the letter said, adding, Satoski was taken to Franciscan St. Anthony Health where he was found to have a defective heart valve and underwent corrective surgery.

“Your husband visited mine during his 10 days in the hospital … No words can express our gratitude and the love we have for your husband. We have prayed for him since that day and now will continue to pray to him,” the letter said.

Lenore Hess said the letter and the presence of Satoski and his family adds particular meaning to the event, proceeds of which will benefit The Don Hess Memorial Scholarship Fund that supplies monies, through the Crown Point Community Foundation, for paramedic and emergency medical technician students.

“What makes this a real special day, not just for myself and Don’s family, is that the Satoski family will attend and throw out the first ball. In fact, 45 members of the family will be attending to help celebrate the event,” Lenore Hess said.

Tickets for Don Hess Day are available for $10, through June 30, through the Crown Point Fire and Rescue department or the Emergency Medical Services Academy, which is located on the Franciscan St. Anthony Health campus, 1201 S. Main St., Crown Point. The Railcats organization also will donate $5 from each ticket sold that day.