The distinct, signature look of a Steiner Home has become synonymous with Northwest Indiana real estate. Each craftsman-style exterior draws the eyes of passersby and promises an interior just as unique and attractive. Steiner Homes is the leading Northwest Indiana home builder for many reasons, one of them being that each home plan possesses its own name and personality, waiting for each family that occupies it to adopt it for themselves with custom, personalized elements. The names are an effective and intriguing touch. Most of us can’t help but wonder—how does the Steiner team go about selecting names for each house?

According to Zachary Steiner, Technical Drafter for Steiner Homes and son of Dan Steiner, president of the company, the names come straight from the Steiner collection of family and friends.

“It all revolves around family,” Steiner said. “Ever since I was little, my dad has always instilled a strong sense of family in me. It’s one of the most important things to us. His idea for naming our homes was, of course, centered on that idea. Basically, it all stems from my father’s love of his family.”

Each home plan is named after one of Steiner’s grandchildren, or after the children of employees who have been loyal Steiner crewmembers for a long while. The tradition began early on, when Steiner Homes created its first two sensational home plans.

“We also have a plan named after the family dog, Jackson,” Steiner said with a smile in his voice.

No doubt Steiner will continue drafting successful home plans for his family’s company, and that’s a good thing for homeowners and the future Steiner family members. The tradition of naming homes after grandchildren will flourish onward.

Steiner joked, but his love for his family and his career was evident.

“We really like the intimacy of naming the homes after our grandchildren,” Steiner said. “It just makes them seem so much more personal. We like to have close connections with everybody that we build for, and we’re always right there on the phone or over email for anyone that we work with. I guess that just kind of goes along with the idea: We love family and we love the families we work with.”

Steiner revealed that we might not have to wait too long for a fresh home plan with a newly christened name.

“There is a new plan I’ve been working on with my dad,” Steiner said.

Will it take on a Steiner grandchild’s name?

Can you give us a hint?

Keeping us in suspense! Since the time of this interview, the Steiners have added two more plans named after grandchildren: the Elijah and the Benjamin. And there is still one more plan in the works for the youngest Steiner grandchild. Stay tuned! 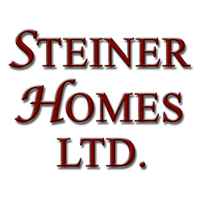