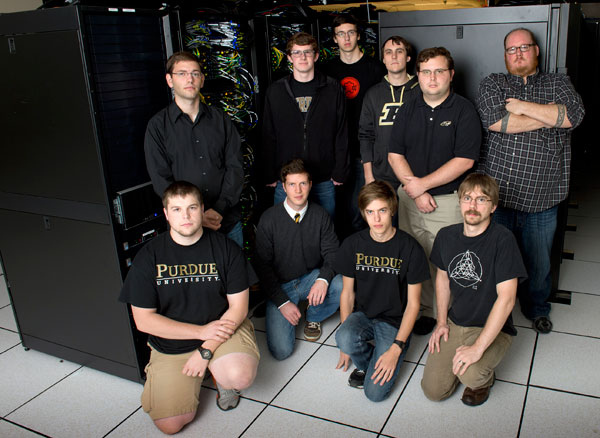 Whether it's developing new cancer treatments or tracking down the particles that make up the universe, not to mention powering Amazon or iTunes, Nick Molo knows high-performance computing is now an essential component.

So the Purdue junior in computer engineering figures experience on a team of students building and running their own supercomputer in an international competition can't help but enhance his prospects, even if it means keeping long hours this semester and a few sleepless nights.

Molo is part of the six-member Purdue team competing in the 2012 Cluster Challenge, the student competition at SC12, the world's largest supercomputing conference. The conference is Nov. 10-16 in Salt Lake City.

The Purdue team, one of just eight selected, will be competing against teams from China and around the United States. Purdue's entry is the only one from the Big Ten and the Midwest.

"My short-term goal is to get a good job after graduation that would potentially pay for me to go back to school to further my education," says Molo, from Joilet, Ill. "The Cluster Challenge already has given me a leg up on the competition. It gives me a great talking point on my resume while also being a great learning experience."

SC12 also is a showcase for Purdue-developed technologies to advance groundbreaking research in science, engineering and other fields. That includes the new open source version of HUBzero, a ready-made software platform for research and education that makes it possible to access powerful computational tools right from a Web browser.

More than 40 virtual communities use HUBzero already in fields ranging from nanotechnology and health care to earthquake engineering and the bonds between human and companion animals.

Other Purdue technologies being showcased at SC12 range from a tool for projecting the impact of land use changes like urban growth on water supplies to a Web-based version of BLAST, software widely used in studying DNA and other biological building blocks.

With 128 processors, about 30 to 60 times more than a typical personal computer, the student supercomputer is a mini version of Purdue's new Carter cluster supercomputer. Carter, with more than 10,000 processors, is among the top 100 most powerful academic supercomputers in the world. Researchers in aeronautics and astronautics; earth, atmospheric and planetary sciences; economics; genomics; and more use Carter.

Likewise, the Cluster Challenge teams - limited to undergraduates - must run an assigned selection of real research software to crunch large sets of sample data as quickly and efficiently as possible. The 2012 applications simulate atoms, model the global climate, probe physics at the very small level and predict the spread of contaminants underground.

Members of Purdue's team help operate Carter as student workers for ITaP. The Cluster Challenge is an opportunity to learn more about the software faculty researchers run on the supercomputer and to experience supercomputing from a user's perspective.

"I've always wondered what types of programs researchers use and what their function is," Kroeger says. "The Cluster Challenge has allowed me to work on many different applications."

Harrell sees that as one of the benefits the students get from being on the team.

"I think educationally I'd really like them to whet their appetites for computational science," he says. "To me it's a pretty amazing thing when you think about it, modeling very tiny things or very large things or very hot things. I'd like them to share some of that excitement and maybe consider it as a career."

During the competition, the students share the load monitoring and adjusting their supercomputer around the clock as they work to process as much data as possible over 48 hours. The prospect of losing a little sleep doesn't faze Reid, who also was on Purdue's 2011 team.

"I wanted to participate in the Cluster Challenge again because it was an awesome experience," Reid says. "I really enjoyed meeting the students on the other teams and other people interested in high-performance computing, and I hope to get a job in the high-performance computing industry, or in an industry where I can continue to work on something I'm passionate about."