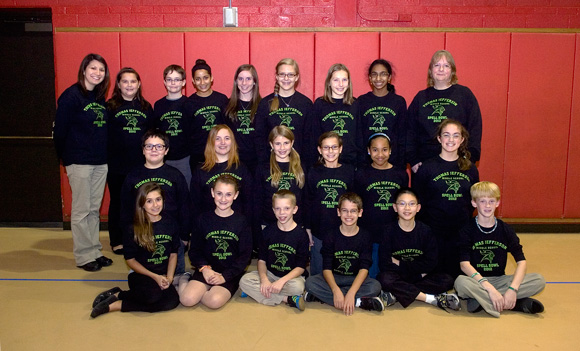 Congratulations to the TJMS Spell Bowl team for its blue ribbon performance at last evening’s Willowcreek Invitational Spell Bowl meet. The team only missed 5 out of 72 words on its way to the win: bulbous, glycerin, boutonniere, omnifarious, and ophthalmologist.

TJ also fielded a B team at the meet, and that team’s score of 51 was the second highest of the night. Unfortunately, only one score per school can be counted. Spelling for the B team were Nate Smith, Grace Tam, Zoe Krenz, Rayna Johnson, Emily Poncher, Antonio Rosario, Hannah Lopez, and Kate White.

Malika Saxena, Ria Gilliam, and April Kinman cheered from the stands and flipped the score cards. The teams were led by coaches Linda Kemper and Jane Strayer.

The team’s next competition is the Area meet in North Judson on October 23. State qualifiers will be decided at that meet, and the team hopes to advance to the state competition on November 10 at Purdue University to defend its state title and continue its winning streak.