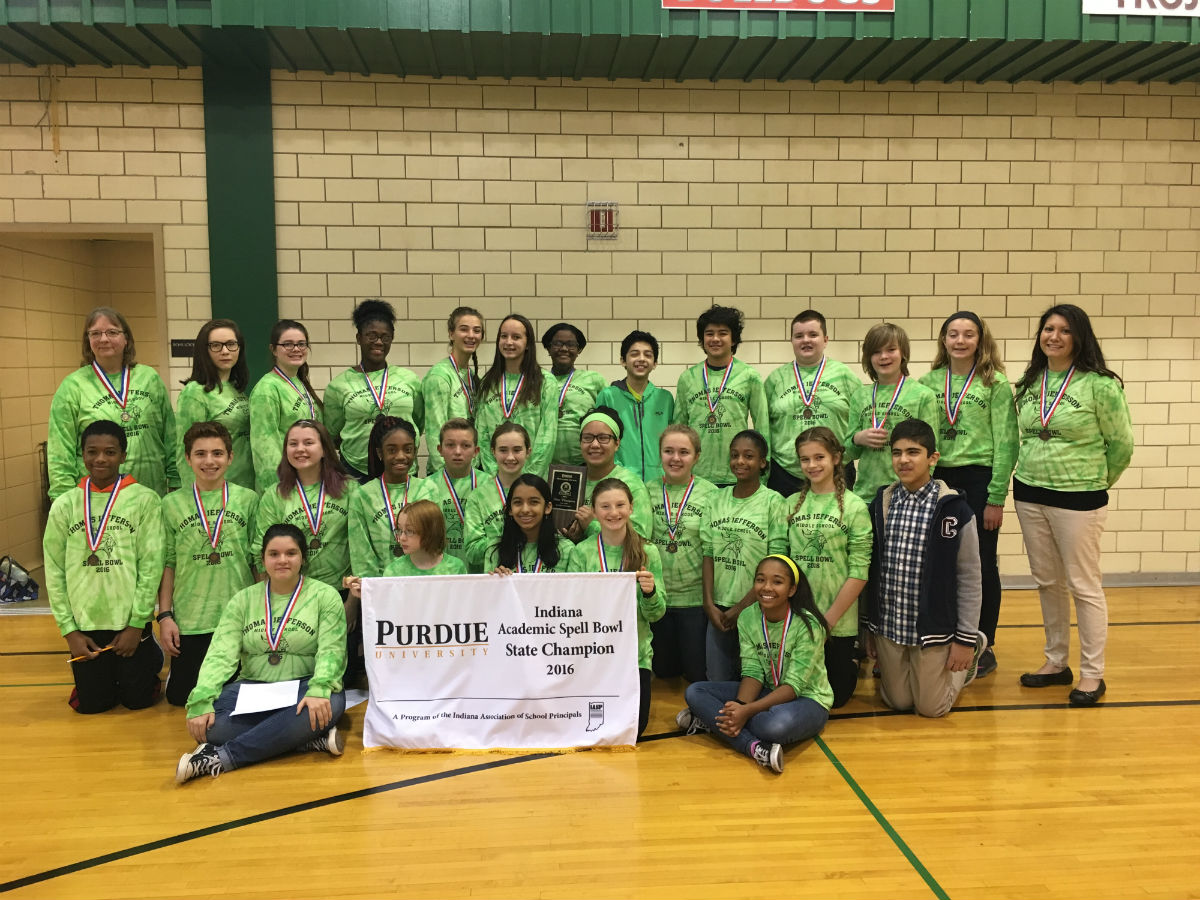 Team TJ qualified for the state competition by earning the top score in the state in enrollment Class 2 at the Area meet held on November 1 at Kankakee Valley Middle School.

Eight spellers comprise the state team, and each speller in a round writes 9 words from the list of 1,661 words supplied by the state. At the end of 8 rounds, the team with the most correctly spelled words is awarded the state championship medals, banner, and plaque. Team TJ bested all other teams in the state by correctly spelling words such as mille-feuille, objet trouve, confectionery, synecdochical, plebiscite, otolaryngology, annus mirabilis, facetious, and gerontological.

When asked how she felt while on stage competing, sixth grader Lily Rengstorf replied, “Going through my mind was OK – I got this, and oh, no, I think I got that wrong!” First year team member and eighth grader Lucia Otten reminisced, “Being inside the Purdue auditorium held a daunting, intimidating feeling all on its own. But being up on the stage, able to view the rows and rows of people in the audience and knowing you held the team’s success in your hand, was quite terrifying. I honestly don’t remember much besides having shaky handwriting as I wrote down the words.”

Various motivations brought students to the team this year. Eighth-grader Skylar Prewitt commented, “I joined at first because of my friend, who had been in Spell Bowl for the past two years, said that you get donuts on Wednesdays. But now I regret not joining Spell Bowl in 6th and 7th grades, and not for the donuts.” Third-year state speller Shannon McCall penned, “I came back for the feeling I get when competing with people who support me and trust me to perform. I love the experience, and I couldn’t have imagined my last season going any other way.” Sixth grader Ramaya Hall wrote,” I wanted to come to Spell Bowl because I thought it would help me expand my vocabulary, which it did.” Sixth-grader Madisyn Myskewitz joined the team, “Because I was in Spell Bowl the previous year (5th grade) and I really enjoyed it, so I decided I would do it again this year.” Madisyn continued, “I met a lot of new people this year in Spell Bowl. Next time I am going to study a lot more and try to be a speller.”

When asked what benefit spellers derived from this season, first-year member Katrina Gootee responded, “Not only did I learn how to spell words I had never even heard of before, but I also got a very rewarding team experience.” 7th grader Regina Gilliam, also a first-year speller, replied, “I benefitted by learning new vocab. I was reading a book and about 5 Spell Bowl words were in one chapter!” Leah Green echoed the vocabulary sentiment when she quipped, “My vocabulary is nice now!” Rengstorf stated, “I learned so many new words to use on ISTEP+!”

Team members were asked to describe this season in one word. First year team member and eighth grader Claudia Pearson chose ‘teamwork.’ She added, “We cheered each and every teammate as they fought for victory in every competition. Teamwork is what makes us win every time, and we have each other’s backs every step of the way. I had a strong sense that we could defeat every one of those teams from all across Indiana, and when the competition ended, we did!” Other submissions included ‘fun,’ ‘marvelous,’ ‘incredible,’ ‘ecstatic,’ ‘exhilarating,’ ‘challenging,’ and ‘arduous.’ Team TJ practiced every morning at 7 AM under the guidance of coaches Linda Kemper and Jane Strayer. Daily spelling tests ranged from 25 words in late August to 156 words the day before the state meet.

Team Captain and third-year state speller Keaton Olson summed up the team’s feelings when he remarked, “ I think we all agree that we won’t miss having to get up early. But we will always miss sitting in the audience of the Purdue University auditorium, cheering for Mrs. Strayer as she walks down the steps to her team, who won another state championship.”