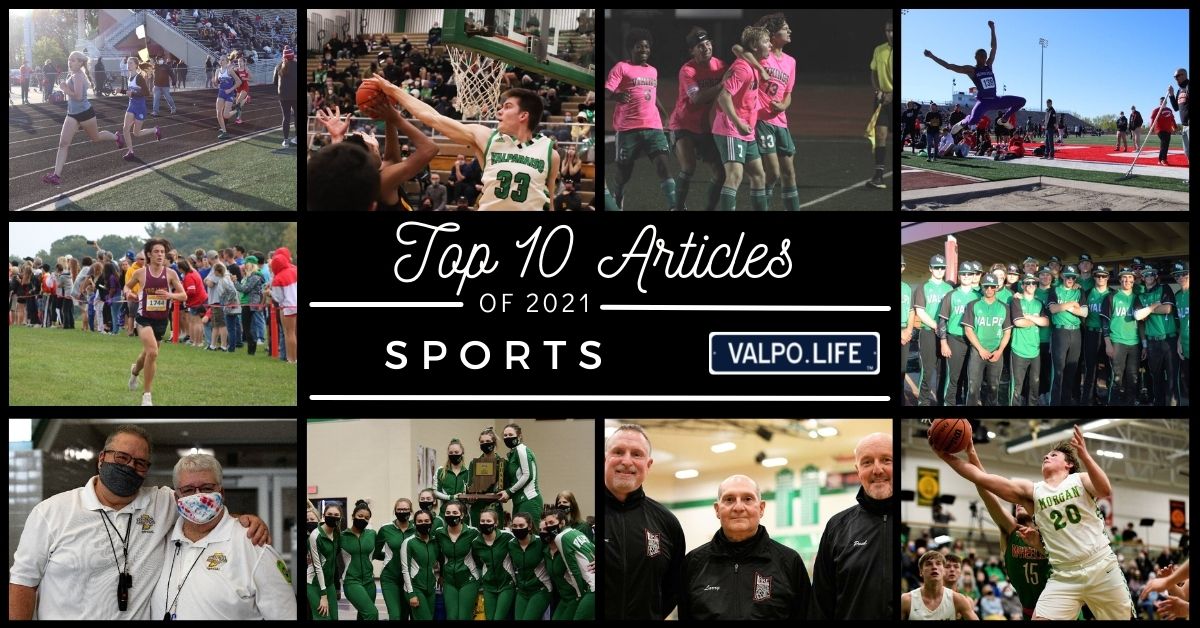 Region athletes brought the excitement in 2021 as they took the field, court, track, mat, course, stage, and so much more to show off their skills and prove that their hard work has paid off. With so many different games and matches happening across high school and college teams in our area, it can be hard to keep track of all the memories and incredible moments in action.

We have summarized the best sports articles from this past year so you don’t have to. These are the highlights from basketball, football, swimming, running, gymnastics, volleyball, wrestling, baseball, tennis, softball, golf, and many more.

In no particular order, here are the top 10 sports articles from Valpo.Life in 2021:

The rivalry matchup between Valparaiso High School and Chesterton High School is always a tightly contested game regardless of sport. The Vikings jumped out early in the first quarter and never relinquished the lead. Senior #2 Colton Jones led the Vikings in scoring with 12 points. The Vikings dominated in every aspect of the game as they claimed the Duneland Athletic Conference title with a final score of 49-27.

The Morgan Township High School Cherokees boys’ basketball team hosted the Wheeler Bearcats in a non-conference home game Friday night. With a season record of 7-6 overall, the Cherokees were favored to win. And it was a good night for a win as Morgan Township celebrated Homecoming Night.

If you have attended a Northwest Indiana swim meet, chances are you saw Roger and Gloria Dombkowski officiating. The duo are now hanging up their white shirts after 37 years of officiating. They were honored today at the annual Highland Swim Invite, the last of which they will officiate.

Valparaiso Boys Soccer closed out their season with a game to remember - a 3-1 victory over the Lake Central Indians secured a three-way tie for the Duneland Athletic Conference Championship. All on a day where they were “Kicking it for a Cause,” donning pink jerseys and working with the American Cancer Society to raise breast cancer awareness.

Portage did not get any runs; however, the game was tight up until the final batter. The bases were loaded, but Valparaiso’s pitcher, Grant Comstock, would not allow a tied game.

“This is a wonderful competition,” Michigan City High School senior Kaydarious Jones said. “I’ve met so many friends around the neighboring cities. I play football also, and it's not this much of a friendly environment. [Here], everybody shows love.”

Friendship met sportsmanship at the 2021 Duneland Athletic Conference (DAC) for boys track and field, where they made the perfect pair. Eight schools across the Region competed in various events, ranging from distance running to long jump.

On Tuesday athletes from all around the Region gathered in Chesterton to compete in the Duneland Athletic Conference Track & Field Meet. This event was just the girls, with the boys competing on May 12 in Crown Point.

While the weather was freezing and athletes cowered in blankets and jackets, when they arrived on the starting line their shivers faded away into complete focus.

It may have been sectionals for Northwest Indiana high school gymnastics, but it felt like a family reunion as schools cheered each other on from Chesterton, Crown Point, Hobart, Lake Central, La Porte, Merrillville, Michigan City, Morgan Township, New Prairie, Portage, Valparaiso, and Wheeler.