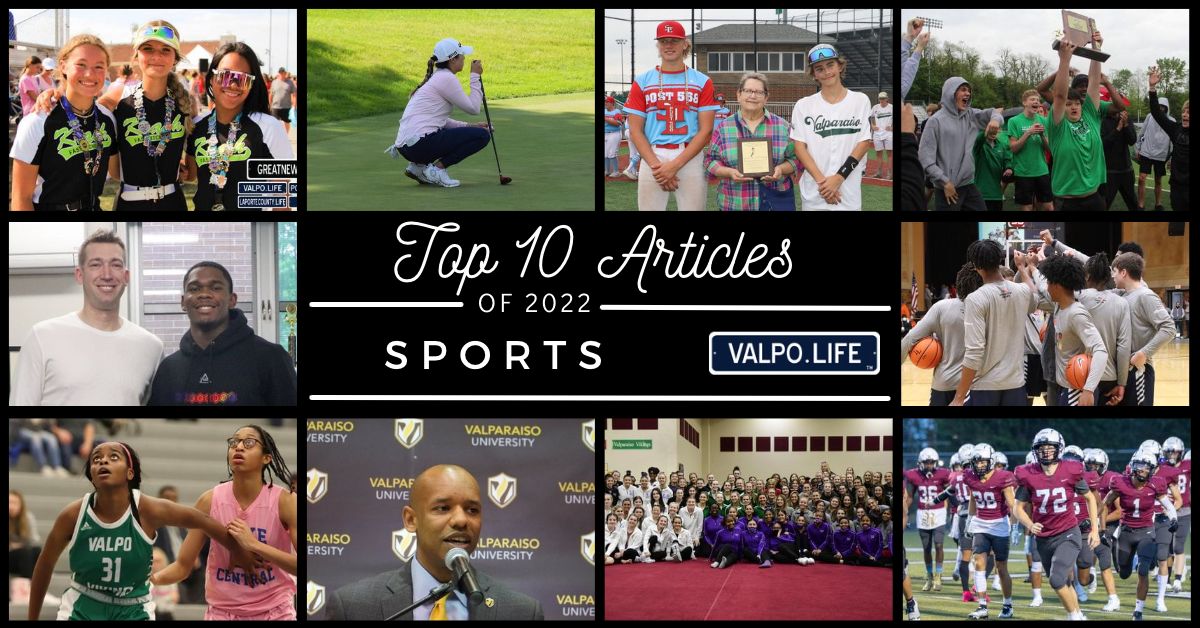 Football, basketball, volleyball, golf, soccer, cross country, gymnastics, wrestling, swimming, track & field, and more filled our feeds this past year, featuring all the good news about our Region athletes in their respective sports. There is so much talent to go around in our area, and we had a blast attending games, matches, meets, and more to help others see the action from a unique perspective.

Whether it was state championships, basketball invitationals, gymnastics sectionals, regional tournaments, new clubs, or anything in between, we shared it all in 2022 on behalf of the high schools and colleges that make our Region proud.

In no particular order, here are the top 10 sports articles on Valpo.Life to recap the good news in 2022!

The City of La Porte kicks off day one of the U.S. Marines NIBC La Porte Invitational

On January 6, the City of La Porte welcomed local fans and elite prep basketball teams from around the nation for day one of the U.S. Marines NIBC La Porte Invitational hosted at the La Porte Civic Auditorium. This was the inaugural kick off for the La Porte NIBC Series that saw 22 of ESPN’s Top 100 recruits for the Class of 2022 as well as the home team – the La Lumiere Lakers – take the court.

Originally scheduled to start the series, La Lumiere’s contest against the Legacy Early College (S.C.) Lions was moved to 2 p.m. after travel conditions forced Legacy Early College to arrive late the night of January 5. Despite the adversity, both teams stormed the court to provide fans with a fast-paced, high-flying basketball game.

Small is coming from Iowa State University where he served as the senior sssociate athletic director of student services. He also is joining the University with 20 years of experience in higher education pertaining to athletics. Before all of that, Small was a walk on the University of Pittsburgh’s basketball team.

“Team sports bring people together” – that is the simple idea Special Olympics cites as one of the main motives for their Unified Sports initiative, which joins people with and without intellectual disabilities together on the same team.

The Indiana High School Athletic Association recognizes two categories of Unified Sports – Flag Football in the fall, and Track & Field in the spring. In both of these sports, teams participate in a full season of games and meets, culminating in a state tournament. The competitors get to bond through training, competition, and build a camaraderie that is often unavailable to students with disabilities who rarely play on their school teams.

As a demonstration of bringing community, civic engagement, and an ethic of service into focus, players gathered at the Valparaiso High School Baseball Diamond for Sunday afternoon’s 2022 Legion Championship.

Stevensville, Michigan Post 568 edged out Valparaiso Post 94 for the Indiana Juniors Legion State title early Sunday night 5-2 at Valpo High School behind the strong arm of Brody Brewer. The 6’ 5” ace on the bump stimmed the Valpo rounders in the championship game tossing a four hitter. However, neither the rain-soaked weekend nor a second-place finish could take the shine off the event for Valparaiso Head Coach Chad Bush, who felt nothing but a sense of a job well done for his squad and the team of volunteers who made the event a huge success.

Opening day consisted of teams, parents, and supporters coming together from all over the midwest to take part in, or spectate a skills competition, as well as DJ entertainment, pin trading, and vendors including World Series Apparel and Diamond Sport Gear.

More than 600 students at Thomas Jefferson Middle School (TJMS) were on the edge of their seats with excitement as Valpo alumni and Purdue University basketball icons Brandon Newman and Robbie Hummel spoke to the kids about overcoming hardships on May 25.

“Former students had contacts with some teachers who knew Brandon, and then his former coach, Mr. [Bryan] Benke knew how to get a hold of him. And then Rob's mom worked here and actually just retired this past year, so I reached out to her and we were able to coordinate a date and get both of them here,” said TJMS Principal Mark Maudlin.

A big CONGRATULATIONS to all of the Region gymnastics teams and individuals who have qualified for the high school state meet this Saturday. These athletes come from the toughest Sectional in the state, with teams ranked #1, 2, 4, 6, 9, 12, and 15. Individuals dominate the top 10 scores in each event and All Around.

Northwest Indiana has dominated the State meet over the last 30 years. Area teams have won 12 of the last 14 team titles, with 5 Runnerup titles. 24 of the 49 Team titles have been won by local teams. Individuals have won 89 state titles over the history of the sport, a stellar 36% of all titles.

The annual Four Winds Invitational brings out over 140 golfers from around the world.

Over the years, the Four Winds Invitational has grown into an event that the entire community loves to be a part of. An event that is part of the Epson Tour, where elite female golfers from every part of the world compete on the Road to the LPGA. From seasoned pros to those just starting their professional careers, each golfer supports the next in their journey.

"The game plan is to score more points. They're [Lake Central] a great basketball team and it's going to be a great match-up. Both teams are defensively oriented and it's can we take care of the ball, work the clock a bit and make sure we don't let them dribble penetrate. They're so quick," said Coach Candy Wilson.

"Lake Central is playing really well right now, so the big key tonight for us is we're going have to be very physical, play sharp and smart and take care of the basketball," said Coach Barak Coolman.