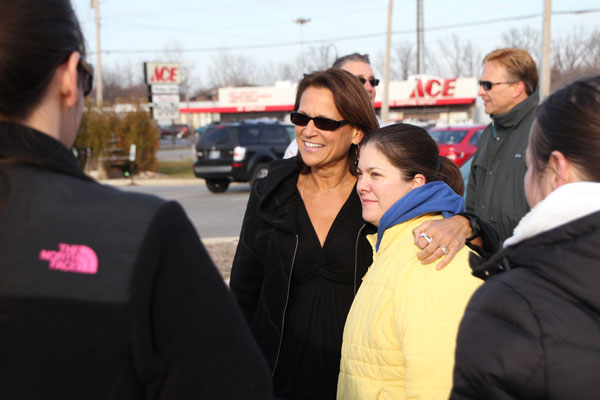 At ValpoLife, we have so many videos laying around from all the good stuff we report on, we thought we'd bring a few back around for an encore. This time around, we have some of our best videos (but not all!) related to you and your health in your community. We got some really great footage with Biggest Loser contestants, Marci and Courtney, as well as some great news out of Porter Health.

Mother and Daughter Inspire Others With Biggest Loser Story

All mothers want their daughters to grow up happy, healthy and successful and that was exactly Marci Crozier's intent for her daughter and current participant in the hit TV show, The Biggest Loser. Marci and her daughter, Courtney, as well as another show contestant from Portland, Oregon, Arthur, had a sort of motivational walk scheduled at Dairy Queen on N. Calumet on the evening of March 29, 2011. Hundreds of people gathered out in the parking lot to get pictures with the recent celebrities and to express their gratitude in the inspiration that they have felt from Marci, Courtney, and Arthur on the show.

Part I of the inspiring series from the Valpo locals, Marci and Courtney Crozier who were contestants on the 11th Season of the hit NBC show, The Biggest Loser.

Marci and Courtney tell their story and journey, which started far before The Ranch

Season 11 contestants from the hit NBC show, The Biggest Loswer, Marci and Courtney Crozier talk about their experiences on the ranch as well as life after the show, with this inspiring video series!

To celebrate American Heart Month, Porter Health hosted Graham Kerr, internationally known culinary and televison personality, as their keynote speaker. Kerr, known as the "Galloping Gourmet" from his TV persona, was once called the "Most Dangerous Man in America" by the Heart and Stroke Foundation due to his high fat, high calorie recipes featured on his influential cooking program before he started making food that minimizes risk but maximizes flavor.