Congressman Pete Visclosky’s town forum on January 14th gave Valparaiso area residents the chance to express their views, on topics ranging from local improvement projects to national healthcare reform. The 19th of Visclosky’s 24 forums was attended by many citizens who both shared and differed from the congressman’s point of view, and all had a chance to have their voices heard. 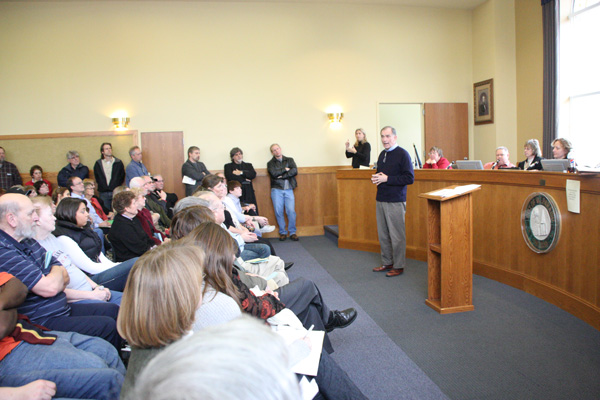 “I applaud the congressman for constantly having these forums and making it easy for people to come out and express themselves,” said Mayor Jon Costas during an interview following the forum. “Despite all the emotion, I think a lot of important information was exchanged…I think the congressman listened, and it allowed people to get (concerns) off of their chests.”

Costas was present for the majority of the meeting and gave the opening remarks before allowing the congressman to be formally introduced by Zach Sutton, 8th grader at Ben Franklin Middle School.

During his introduction, Zach chose to highlight Congressman Visclosky’s flair for bipartisan cooperation. “Pete believes that it is best to put aside party differences and work together to get things done,” said Zach.

After presenting his introducer with a certificate of appreciation for the job well done, Visclosky began the forum with a short speech. The congressman praised Mayor Costas for his dedication to improving Northwest Indiana before moving on to more national topics. He discussed the “grudging process” of healthcare reform, the process of troop withdrawal from Iraq, and several local improvement projects, including the funding of meteorological equipment at Valparaiso University. The congressman spent the remainder of his time answering questions submitted by the audience.

"The Valparaiso town forum is always well attended with an engaged audience. I appreciate hearing from people on the local and national issues of the day and only wish people were so passionate more often," said Visclosky.

On the public option: “There is a public option in the house version of the bill to provide options, opportunities, and competition for people who cannot get it any other way…For those who have no other option left in life, we want to give you one, and that is the public option.”

On President Obama’s plan to withdraw American military troops from Iraq: “While I appreciate that there is an end in sight, I am disappointed that the president’s schedule (for withdrawing troops) is not more aggressive.”

On credit card reform: “In my opinion, it doesn’t go far enough”

On the Constitution: “I cannot think of an example, short of the bible, that is a more eloquent or profound document.”

On the proposed South Shore extension to Valparaiso: “I am convinced that it is coming to Valpo, and I am convinced it is going to go to Lowell.”

On his loyalties: “I work for everyone in this room…you have given me a great privilege in life by electing me to Congress.”

On Congress’s work and efficiency: “(Our goal is) to try to leave the world a tiny bit better; what we fight over is how do we get to that point.”