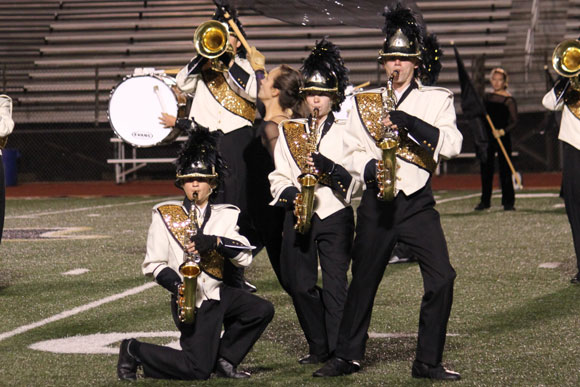 The Chesterton High School Trojan Guard marching band traveled to Concord High School in Elkhart, Indiana this past Saturday to participate with 19 other Northern Indiana bands in the Indiana State School Music Association’s (ISSMA) District level contest. The band’s performance earned them a “Gold” superior level rating, an achievement that qualified the group for the ISSMA Regional level of competition later this month.

This District event marks the first level of statewide competition toward the ultimate goal of competing in the annual ISSMA State Marching Band Championship held at Lucus Oil Stadium in early November. Bands are adjudicated by a panel of six judges in the areas of Individual Music Performance, Ensemble Music Performance, Music Effect, Individual Visual Performance, Ensemble Visual Performance and Overall Visual Effect. Bands across the state that receive a composite score high enough to qualify for a first division (superior) rating, will move on to either the Northern Indiana or Southern Indiana regional competitions held on the weekend of October 13. At the Northern and Southern regional competitions, the 10 bands with the highest point totals will advance to the Semi-State competition where they will go head-to-head with all of the bands in their respective class for a chance to secure a position as a state finalist band. A total of 40 bands (10 from each class A-D) will then compete at the Indiana State Marching Band Championship held in Lucas Oil Stadium in Indianapolis on Saturday, November 3. 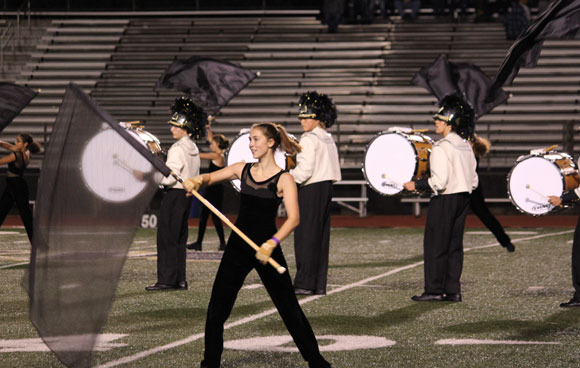 The Trojan Guard’s 2012 field show is entitled, “Out of the Darkness.” This year’s production is comprised of three sections that gradually take the audience from all things ‘black’, into the joyous transformation of the ‘light’. The music includes: Mvmt. I Abyss, Mvmt. II Into the Light, Mvmt. III Salvation!

There are 82 students in the Trojan Guard this year. 42 woodwinds and brass player, 15 percussionists, 24 color guard members, and one drum major.

The next performance by the Trojan Guard will be this Saturday, October 6 when the band competes at Lincoln-Way Central High School in New Lenox, Illinois. Performance time is 4:36 p.m. The Trojan Guard may be seen locally at Chesterton High School on Friday, October 12. The band will be performing at both pregame and halftime when the Golden Trojans take on the Pirates of Merrillville.

The Trojan Guard is under the direction of Michael Scheiber with assistance by Vincent Arizzi. Additional staff includes Lisa Scheiber, color guard director and Jeff Wroblewski, drill design. For additional information regarding the Trojan Guard or any band activity, please contact the CHS Music Department at 983-3730.