A thrilling experience awaits you and your family this summer at Pepsi® Tall Ships Chicago 2010 at Navy Pier®! 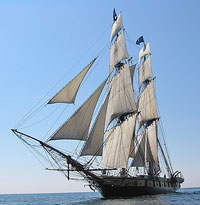 Navy Pier proudly welcomes more than 20 majestic and historic tall ships from around the world, August 24 — 29. For the first time in Chicago, a tall ships festival of this size will be located in one place: Navy Pier. Visitors can view all of them, board up to 12 of the vessels, and even take daily sails aboard five of the tall ships.

The pageantry kicks-off with an opening day Parade of Sail on Lake Michigan, starting at 4 p.m. on August 24. As these storied ships with their billowing sails make their way to Navy Pier's docks, they'll form the perfect backdrop for the official Opening Ceremony at 5 p.m. You can even sail on a tall ship DURING the Parade of Sail and be on deck as you get a breathtaking view of the ships as they sail past Navy Pier.

Pepsi® Tall Ships Chicago 2010 has something for everyone from August 25 — 29. Ships will be docked in three Festival locations at Navy Per: Nautical Mile (North Dock), Canada Cove (NW Wall at the front of the Pier) and America Alley (SW Wall at the front of the Pier). Although the tall ships are the "stars" of our festival, the event also offers fun activities for kids at the Children's Village, international entertainment at three festival stages, and nightly fireworks shows. Spend an entire day or two to create memories that will last a lifetime.

Come experience the grace and grandeur of maritime history along Chicago's lakefront!