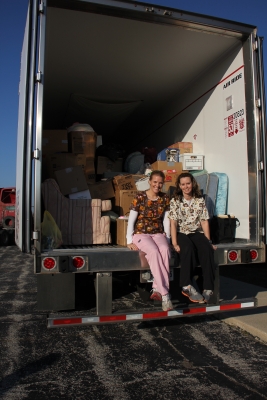 What started out as a simple call for coats and blankets led to an outpouring of community donations.

After the news coverage of hurricane Sandy, co-workers at Vale Park Animal Hospital were discussing the devastation being reported. Veterinarian Dr. Kim Juhlin asked the simple question, “What is Vale Park going to do to help the effort?”

The practice owners and staff decided to begin a donation drive. After donations began pouring in, a telephone call was made to global trucking company, C.R. England. Utah based company C.R. England has a school and depot in Burns Harbor, Indiana. Through a staff connection, they were approached to help transport the mounting donations. They heeded the call, as this was the fifth truck they were transporting to help the effort. 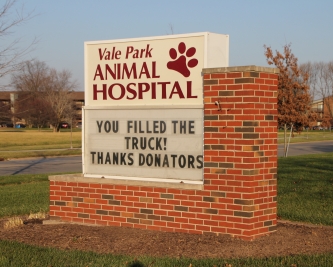 "I got in touch with the Salvation Army, and they said they were happy to have us drop it off at their divisional headquarters warehouse in Trenton, New Jersey. The gentleman I spoke with had said that their shelters were almost out of food, and with our community’s help we were able to completely fill this 53-foot trailer with food, clothing items, and more," said practice manager Jamie Ellis.

The 53 foot trailer was filled over this past week from donator’s all over northwest Indiana. The trailer was loaded by Vale Park staff and their families. The truck departed today with a police escort to highway 49, led by Valparaiso Officer Todd Kobitz, and the Vale Park Animal Hospital employee’s lined the sidewalk for the sendoff. In attendance for the truck’s departure was Lisa Bessigano of Lake Station, Indiana. “We like to help people in need,” she commented this afternoon. Bessigano is a part-owner of L & S Resale Shop in Lake Station, and they donated a great deal to be sent to New Jersey.

The C.R. England driver has a digital camera provided by the animal hospital to take pictures of the donations being unloaded at its final destination in Trenton. Many times when giving to charity, people often wonder if their donation made an impact. Vale Park plans to provide the photos as the finale of this great effort. A heart felt thank you to all who donated and gave their time and energy for this mission. 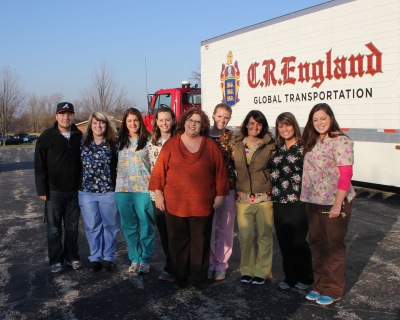