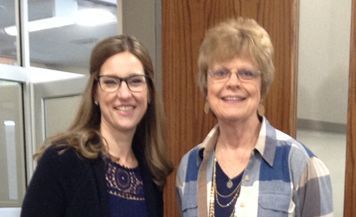 This was a long work in progress that began last year when teacher Megan Becker had an idea to guide her class through the writing of a program that would be a kid-friendly narrative of how Indiana gained statehood — honoring the bicentennial.

This was an opportunity for learning across the curriculum, as students learned state songs during music class, created costumes in art, while also learning about history in the classroom. By June 2016, a program was written that not only communicated our state’s history, but also encouraged students to be productive citizens who work hard to serve in their communities by showing HEART (Honesty,Effort, Attitude, Respect, Teamwork) — which is our school motto.

In front of scenery created by parent volunteers and students, this student-led program began with a welcome message from the student council president, the Pledge of Allegiance and the singing of the national anthem. The choir, accompanied by music teacher, Elizabeth Larson, then sang "Fifty Nifty United States," showcasing all of the states!

A fifth grade reader’s theater group read the narrative as Alicia Watkins’ third grade class acted out each event describing the great migration, the building of mounds, the settling of Native Americans, the exploring of the French and LaSalle and the trading of furs.

After the singing of Indiana’s state song, "On the Banks of the Wabash," Megan Becker’s third grade class acted out events including the signing of treaties over control of the land and trade, the taxing of colonists, the signing of the Declaration of Independence, the rise of population in the Indiana Territory, the writing of a state constitution and finally Indiana gaining statehood.

The entire student body sang their hearts out to "My Country Tis’ of Thee" and "Back Home Again in Indiana" featuring fourth grade soloists.

The program came to a close with an exciting reminder that even though Indiana has been a state now for 201 years, as young Hoosiers, we have an important role in creating a bright future for our communities by working together, caring for others and being strong leaders.

As a couple students held a heart with Indiana in the middle high in the air, we sang our school song loud and proud, "Show Your HEART."

This was a collaborative effort that brought staff, parents and students together! That’s what education is all about!