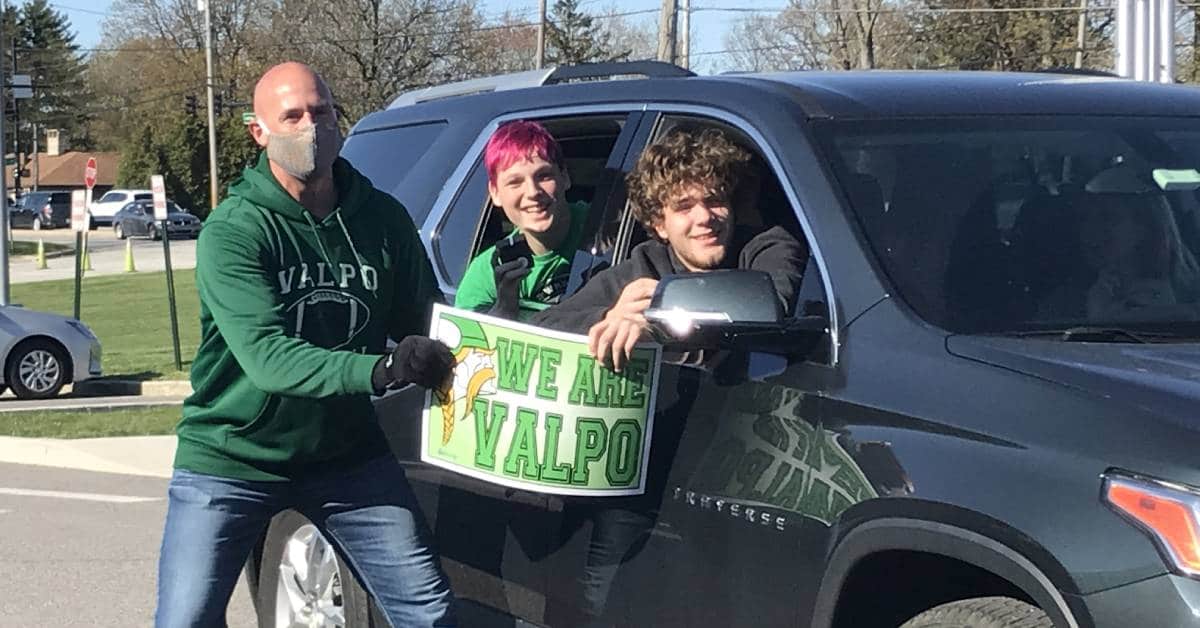 On the evening of November 29, 2019, the Valparaiso High School football team made history as they played in the IHSAA State Championship for the first time since 2001. This Friday, the Vikings commemorated that iconic moment as the team received their 2019 State runner-up rings.

"I want to thank the school board and all the administrators for allowing the players to have this special moment with their coaches and teammates,” said Stacy Adams, Valparaiso High School Athletic Director.

In adherence with social distancing rules, vehicles lined up in front of the school, each one carrying a player awaiting his hard-earned piece of history. For 2019 team captains Jack Cahill, CJ Opperman, Peyton Krutz, and Luke Patterson, who helped lead the team to a historic season with their guidance and skill, receiving their rings held particularly sentimental value.

“I think I can speak for every player on the team when I say this is a very special moment,” Cahill said. “It gives all of us a little memento that represents all of the hard work and sweat that was put into the season.”

“I have to thank my teammates and the coaching staff for making this season so great,” Krutz said. “These rings are a reminder of what an incredible season our team had and everything we accomplished.”

Opperman and Patterson agreed that the team’s success was the result of vigorous work ethic and an unshakable bond forged from months of workouts.

“Every kid on our roster put in the amount of effort that was needed to earn that ring and it definitely paid off,” Opperman said. “We’ve all worked so hard to get where we are today, and receiving these rings means a lot to us."

“Whenever a group of people had to run because they lost a practice competition or something like that no one sat out, even though only the losing team was required to run,” Patterson recalled. “That happened a whole lot and those were the moments I will remember most vividly. It showed that everyone was all in, and willing to do whatever was needed to win. I couldn’t have asked for better teammates, coaches, managers, or athletic trainers.”

For running back Tommy Burbee, receiving his ring meant becoming part of both the Viking and Burbee family football legacy.

“My dad received the same ring his senior year, which he gave to me when I was a kid,” Burbee said. “He's always been my role model, so receiving the same ring makes me feel like I am on the right track.”

“It feels very good to be able to celebrate this awesome event, in spite of COVID-19,” Krutz said. “It goes to show how great our community and families are, and how valuable the support they provide is. None of this would have been possible without them.”

“While there are obviously bigger things going on in the world at the moment, it makes it even more special that people are taking time out of their day to celebrate this with us,” Cahill added. “I’m thankful for my teammates and coaches, all of Viking Nation, and the whole city of Valparaiso for showing up and supporting us until the end.”

The Vikings drew on community support for every game and gained a special kind of confidence knowing their entire city stood behind them through and through.

“It feels amazing knowing that we not only have our families supporting us, but a whole community behind us as well,” Patterson said. “We are all beyond grateful for what everyone in the community has done to support us all season long.”

“I’m glad that as a team we could give them excitement and something to look forward to,” Burbee added. “In return they helped us realize that we were not just playing for the team, but for our school and our community.”

Friday’s ring presentation served as a long-awaited reward for the Vikings of today and a source of inspiration for the teams of tomorrow.

“This moment proves to future Vikings that come through the program that hard work pays off,” Patterson said. “That’s something applicable not just for football, but for everything they do throughout life as well.”

“I hope this accomplishment inspires the underclassmen and youth Viking football players to dedicate themselves to becoming the best football players they can be,” Krutz said. “Hopefully their efforts can lead to the team to winning it all in the future.”

With the ring ceremony officially bringing the 2019 season to a close, the 2019 team captains prepare to pass the torch to the leaders of the 2020 squad, and look back on this season with a sense of nostalgia and gratitude.

“The memories we made are something I will never forget,” Krutz said. “I am so grateful to be a part of it!”

“I miss those Friday nights and playing with my boys a lot,” Opperman said. “There’s no other team or sport that I’ve been a part of that had that close of a bond with each other. Our senior class laid the groundwork for these underclassmen to build on and I know it will only get stronger from here.”

There is no doubt that these leaders are leaving the program in good hands, with rising captains John Hofer, Dylan Dingman, Cooper Jones, and Tommy Burbee ready for the challenge of leading the Vikings to future victories.

“There is nothing better than being a Valparaiso Viking,” Hofer said. “I want the next generation to know how special it is to represent the town and call yourself a Viking.”

“I think this season will make next year’s team hungry for more,” Dingman said. “The bar has been set high, and the quest for the state championship ring is not over.”

“Last year was awesome, but that's over now, so it's time to work even harder,” Jones concluded. “Next year we don't just get back to state, we win state.”