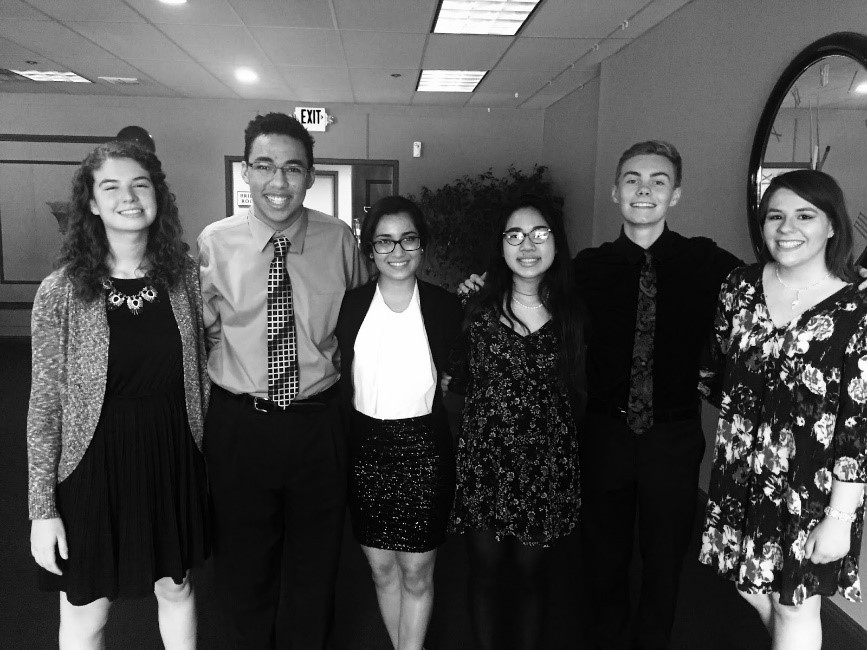 This year, the Valparaiso High School Speech & Debate team has qualified six people to the national tournament in Salt Lake City. Due to the high costs of this week long competition, we need your help in making this trip happen. Please donate now, and we promise that our skills will not disappoint!

Malika Saxena-Congressional Debate, Junior
Who am I? Well, that’s a difficult question to answer. I am adventurous, but I am tame. I am loud, but I am quiet. I am crazy, but I am ordinary... I think that defines my personality best: ordinary. I am ordinary girl who, in Northwest Indiana, is trying to survive my not-so-ordinary high school. I am a girl who, before (accidentally) joining Speech and Debate, didn’t know who I was. Before being a part of this team, I wasn’t very confident, and I was incredibly shy. I was the girl who spoke when spoken to, who didn’t know who our current president was, and who did not, for a minute, believe that 5 am could be fun. That all changed - I changed - when I met my beautiful coach, Mrs. Waters, and became part of this beautiful cult. (ATTENTION: NOT AN ACTUAL CULT) Speech and Debate has shaped me into the person I am today: a girl who isn’t afraid to voice her opinion and who loves talking politics and who weirdly loves 5 am Saturday coffee runs before a competition. This year will be my second year at nationals, and I can’t begin to explain my excitement. Facing some of the top debaters in the country, arguing for hours on end, and making new friends is a thrill that can’t be described - at least for a geek like me. This summer in Utah, I will participate in Congressional Debate, which is just what it sounds like: congress. But don’t worry! We’re much more efficient than our actual elected leaders, and our arguments are actually logical. :) This year, my amazing team has qualified ten students to nationals, and we are asking that you help us make our dreams come true. Your donation will help make this trip possible, and I promise you, as ordinary as I may be, this competition will be extraordinary - not just for me, but for you and for our community.

Amber Tan-Congressional Debate,Junior
Last year was my first time competing at nationals, and it was by far the best experience of my debate career. I got to meet new people who are passionate about the same things as I am, and I grew so much as a person. This year, I have been blessed to, once again, qualify to the national competition, and I can hardly hold my excitement! Please help us bring pride to our school and community by donating to support our trip. Our hard work has payed off thus far, and I know that our hard work for the next two months will definitely be worth it.

Kaitlyn Steele-United States Extemporaneous Speaking, Freshman
If I was asked to select one animal that truly embodies a high school freshman, I would most definitely choose a turtle. Just like a turtle, a high school freshman starts out terrified of everyone and everything; one could even say high school freshman have shells, although in this case they are purely metaphorical. It takes time to come out of that metaphorical shell, but one extracurricular in particular, speech and debate, has helped thousands of kids in Valparaiso to work their way out of their shells. I myself have experienced this strange phenomenon in which a shy freshman becomes a confident and opinionated speaker. Before I joined speech and debate, I had very adverse feelings towards public speaking; in other words, I was petrified to even speak in front of classmates and would shake the entire time I was presenting. But for some unexplainable reason, I felt drawn towards speech and debate when I entered high school. The transition was not an easy one, and I was still terrified for the first few weeks of practice, but my coaches and teammates were very encouraging even when my speeches weren’t the best (which is to say they weren’t good at all). However, sometime during these weeks of terrifying practices and awful speeches, my speaking skills and confidence actually began to improve. Thankfully, this trend continued throughout the season, and I was eventually able to become a qualifier for nationals. Now I implore you to help my teammates and me finish this journey full circle by donating money to our GoFundMe account, which will be used to help fund our trip to nationals in Salt Lake City, Utah. Who knows, maybe your donation will help a high schooler to finally come out of her shell.

Ryan MacDonald-International Extemporaneous Speaking, Junior
Hello, my name is Ryan MacDonald and I am a junior at VHS as well as a three year member of the Valparaiso Speech and Debate Team. This year, I am one of the fortunate students who has won an opportunity to compete at the national tournament. The event that qualified for is International Extemporaneous Speaking - essentially I report on International news in a 5-7 minute speech. I'm exhilarated to be going to the Speech and Debate Nationals as it will provide an amazing opportunity for me to continue to expand my talents as a speaker. I have attended nationals before and it has proven to be an invaluable experience to have. Competing against the very best speakers from across the United States is both something awe inspiring and terrifying. Last year, I had to constantly remind myself that, even though I was surrounded by such amazing talent, I was a speaker who had earned the right to be there. This year I hope to be a bit more confident in being situated there. I am grateful to everyone who has supported me in my journey thus far, and I hope that you will too.

Christian Sayers-International Extemporaneous Speaking, Senior
I am very excited to have the opportunity to compete at nationals in Salt Lake City this year. My event in speech, International Extemporaneous Speaking, has come to mean so much to me over the past 4 years; I'm passionate about politics, competing, and most importantly speaking. The opportunity to compete with the absolute best in the nation is one that I am very grateful to take advantage of again. Placing well at nationals is a dream of mine - one that I hope to fulfill at Salt Lake City. To do so, however, my team needs your help in funding our trip and guaranteeing that our wonderful coaches and my teammates can all compete at this tournament.

Kaitlynn Saxe-Program Oral Interpretation, Junior
Joining Speech and debate has been, by far, the best decision that I have ever made. Through this program, I have found what it means to have a voice. The event that I compete in, Programmed Oral Interpretation, is where I take multiple pieces of literature and put them together to create a program with one common theme. The theme that I chose to speak upon helps give a voice to those who aren't here to speak for themselves. For example, this year I did a program with the theme of education. I use the power of poetry, drama, and prose literature to portray a powerful message to the public about those who are uneducated. I am so thrilled to have spread that message to our local community this year, but I am even more thrilled that my message will be heard across the nation this summer in Utah.