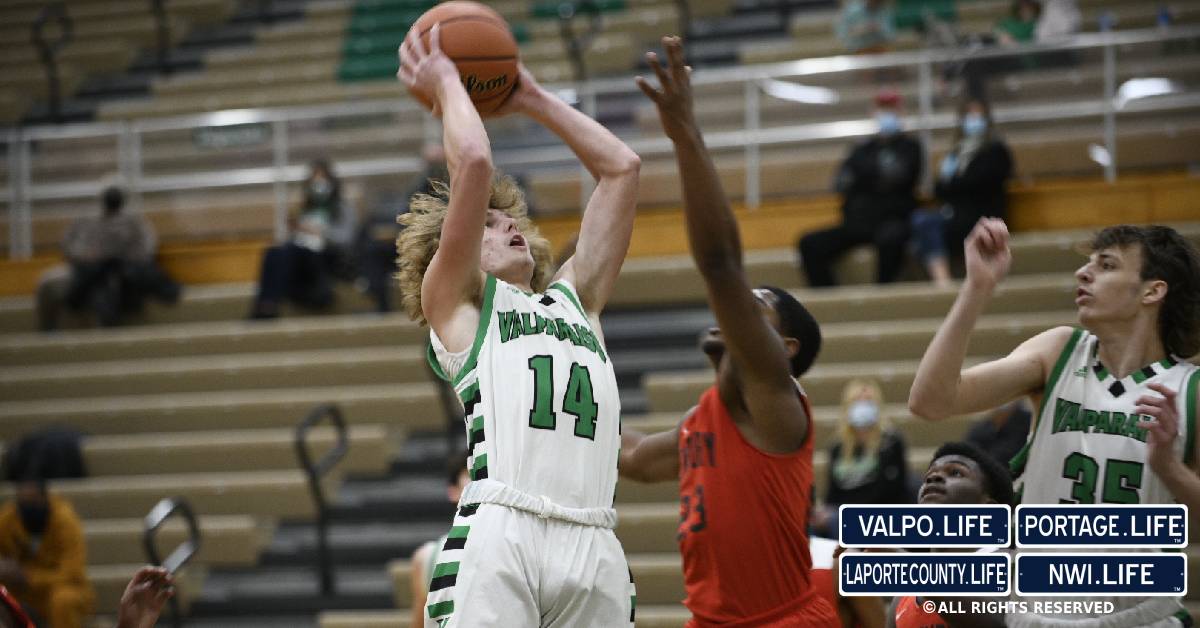 It was an intense fight to the end, but the Valparaiso High School Vikings boys basketball team remains undefeated f after battling the Gary 21st Century Cougars in a non-conference game on Viking court.

Initially winning the tip off, the Vikings appeared confident they would sink the first basket and take the lead but the Cougars had other ideas. Coming from behind  the Cougars had tied up the game 8-8 in the first quarter when their #23 Demetrius Moss nailed a three pointer putting the Cougars in the lead. His team mate #21 Roy Cast passed to #10 Quinten Floyd who scored a two point basket securing a lead of Cougars’ 13 to Vikings’ 8.

Second quarter did not look good for the Vikings. With three minutes left they were down by eight points. Down but not out, the Vikings rallied back during the remaining minutes when the Vikings'  #32 Rowland Sorrick secured two additional free throws. The first half of the game ended with the Cougars in the lead by just one point and a score of Cougars 23, Vikings 22.

The game only intensified from there.

Fans were standing up and cheering as the teams traded points. In the third quarter, Vikings #2 Colton Jones brought his team closer to victory, narrowing the score. With just 2:41 remaining in the third quarter, the Vikings took the lead with a score of Vikings 30, Cougars 29.

However, Cougars #10 Quienten Floyd shifted the game when, with just 1:48 left in the quarter, he scored a three pointer putting the Cougars back in the lead. The third quarter ends with the Cougars once again ahead by one point.

At the top of the fourth quarter the score was Vikings 34, Cougars 35. The momentum continued. With just 46 seconds left in the game the score was Cougars 43 and Vikings 42, the Cougars lost the ball to the Vikings. With the possession theirs, the Vikings' Colton Jones was sent to the free throw line.

Thanks to Jones securing two more points, the Vikings took the lead 44-43. With fifteen seconds in the game, the Vikings again had control of the ball when Colton Jones was fouled, once again being sent to the free throw line. He scored another two points. With seven seconds left, and down by three points, the Cougars made one last heroic play attempting a three pointer that not hit the mark.