William Eckert, a Scout Leader from Valparaiso, Indiana, was among a select group of Scouts and Scout leaders nationwide named July 25 to the Boy Scouts of America (BSA) 100th Anniversary National Hall of Leadership. 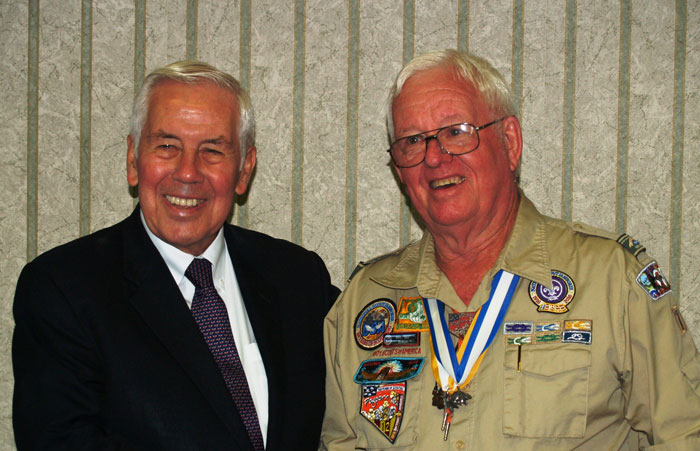 Eckert represents the LaSalle Council, located in South Bend, Indiana. Fondly considered “Mr. Scouter,” Eckert was chosen as one of less than 300 inductees out of 7000 nominees nationwide. Over his 43 years of leadership and service, Eckert has personally taken Scouts to long-term summer camp every year. Over 70 Scouts under Eckert’s outstanding leadership have become Eagle Scouts, BSA’s highest youth achievement. Many of these Eagle Scouts are leaders in Scouting today. Having been a leader at 16 Jamborees, 4 World, 2 Australian and 10 National, he is a tireless worker and leader for the BSA on all levels. Eckert holds the highest Scouting awards from his church, district, council, region, and now nationally as well.

“It is not the number of years Bill has been Scoutmaster or the number of Eagle Scouts his troop has produced in that time that impresses me the most. It’s how much he cares, and how many hundreds of lives he’s touched and made a positive difference in,” said Dave Sykes, Assistant Scout Executive at the LaSalle Council. “The number of successful adult men who will attribute a large part of their success to what they learned from Bill as a mentor is absolutely amazing!”

During a ceremony at the close of the BSA’s Centennial Parade in Washington, D.C. on July 25, Eckert was named to the National Hall of Leadership for making a significant difference in the life of another by the extraordinary service he has given, and the Scouting virtues he has modeled.

In addition to the July 25 ceremonies in the nation’s capital, each inductee will have his or her name recorded as part of the BSA’s 100th Anniversary archives at the National Scouting Museum in Irving, Tex.

“This is a once-in-a-century honor,” Sykes said. “We’re honoring, recognizing, and thanking our Scouts, leaders, and volunteers for the extraordinary differences they have made in the lives of others through their leadership.”

“What better way to help celebrate 100 years of Scouting in America than by giving the citizens of the communities we serve the opportunity to remember and honor these individuals who have made such a significant contribution to the lives of others and who have improved the quality of life for all,” said Robert J. Mazzuca, Chief Scout Executive.

Chairing the Hall of Leadership program was Ernest G. “Ernie” Green, who earned a place in America’s civil rights history as one of the “Little Rock Nine” – the first nine African-American students to attend an all-white high school in Little Rock, Ark. in 1957.

“The National Hall of Leadership epitomizes everything I have always respected about Scouting, because Scouting’s values help mold our young people to be the great leaders our country needs,” Green said. “I would like to extend my heartfelt congratulations to the inductees receiving this one-time honor in Scouting’s history.”

The National Hall of Leadership is one of a number of programs designed to invite people across the country to join in and celebrate the Boy Scouts of America’s first century of service to America’s youth.

About the Boy Scouts of America

The Boy Scouts of America is the nation’s foremost youth program of character development and values-based leadership training. The Scouting organization is composed of 2.7 million youth members between the ages of 7 and 20, 1.1 million volunteers and nearly 300 local councils throughout the United States and its territories.

More information about 100 Years of Scouting can be found at www.scouting.org/100years.