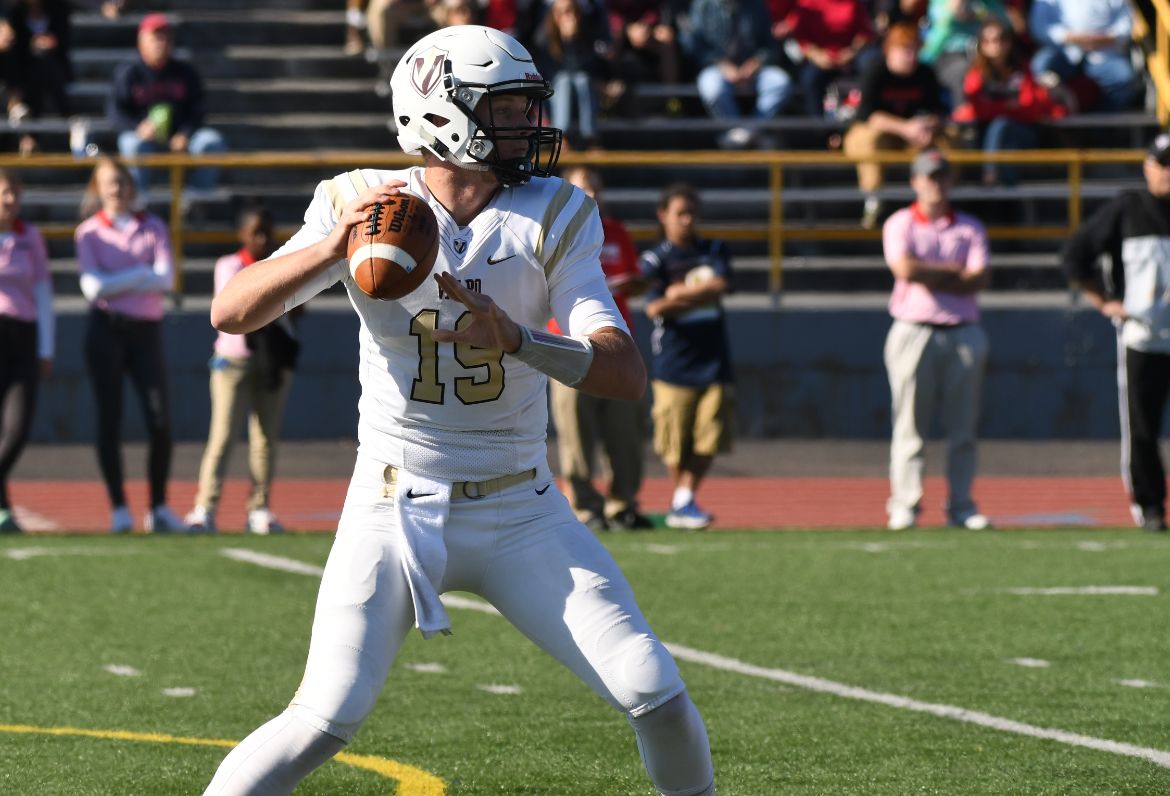 When comparing the Valparaiso University football team entering the 2017 season to where it was at this time in years past, there’s no doubt in the minds of players and coaches that the state of the program is far different.

“We’re light years ahead,” head coach Dave Cecchini said. “Because of the experience, because of the leadership and most importantly because we are a stronger football team. Our strength coach, Coach (Tony) Rouse, worked them hard in the offseason. We’re seeing a team that, in addition to being the most experienced, is definitely the most physically-mature team we’ve had in the years we’ve been here.”

The Crusaders have nine returning starters on offense and seven on defense from a team that tied for seventh in the 11-team Pioneer Football League. That marked the first time Valpo has finished ahead of three or more teams in the standings since 2003, when the Crusaders won the PFL title. Now, they’re optimistic about their chances of taking the next step forward in 2017.

Quarterback
When it comes to the excitement surrounding the future of the program, a good place to start is at the quarterback position. All five members of a young, talented QB group are in their first or second year in the program and enter this season with three or four years of eligibility remaining.

Sophomore Jimmy Seewald is the starter after throwing for 144.3 yards per game, which ranked ninth in the PFL overall and first among PFL freshmen. He also completed 13 touchdown passes in 10 games as a rookie.

Chris Duncan has yet to see the field in a collegiate game, but the Valpo staff has raved about his potential. After redshirting last season, he will partake in game action in 2017 as Valpo’s second-team quarterback.

“Jimmy’s speed and level of confidence has really grown,” Cecchini said. “He has increased his knowledge of the offense. Chris will most likely see some action early in the season as we like to use two quarterbacks in those games. He’s also improved tremendously. His athleticism is pretty apparent.”

Redshirt sophomore Joe Mullen, freshman Trey Bilinski and freshman Ryan Markoff are all competing to be the No. 3 quarterback. Mullen sat out last season after transferring from Tiffin, while Bilinski and Markoff are true freshmen.

“Joe has a really strong arm, Trey is extremely intelligent and Ryan is an outstanding athlete, so they each have their own strengths,” Cecchini said. “We’re waiting to see who that third-team guy is going to be.”

Running Back
A consistent fixture of Valpo football during the Cecchini era in Jarrett Morgan returns as the team’s starting running back for his senior campaign. Morgan was named to the 2017 Preseason All-Pioneer Football League team after ranking seventh in the league with 94.0 all-purpose yards per game a year ago.

Sophomore Kyle Cartales currently holds the No. 2 running back spot. He averaged 21.5 yards per game as a freshman.

“Jarrett has looked good through camp; we’re expecting him to have a big year,” Cecchini said. “He’s played a lot of football for us, he’s a competitor and he’s tough. We’re excited about where he’s at going into his final year. Kyle has played very well in camp, which is nice to see. He’s definitely going to have a big impact on our offense and see a lot of playing time.”

Sophomore Cody Boxrucker and redshirt sophomore Elias Earley are batting for the third running back role. Boxrucker was used frequently in goal line situations and led the PFL in rushing TDs among freshmen with seven in 2016.

“Boxrucker is more of a short yardage back; Elias is a jitterbug and is quick,” Cecchini said. “They are different types of backs. Situationally, we could use one over the other, but right now they’re both listed at the No. 3 position.”

Freshman Doug Haugh is also in the mix at running back, while redshirt Brannen Martin is Valpo’s top full back.

Tight End
Junior Mason Sutter returns at tight end as a third-year starter after making 22 catches for 230 yards and two touchdowns a year ago.

“Mason had a great camp,” Cecchini said. “He’s really gotten better and this will be his third year starting for us. He continues to get stronger, faster and more confident in his routes and blocking ability.”

Senior Ryan Clarke has the slight upper hand on sophomore Martin Petruf in a battle for the second-team tight end position. Freshmen Brett Bittner and Alex Kluck, described as outstanding young prospects, are battling for the fourth tight end slot.

Wide Receiver
At split end, senior captain Frank Catrine will get the start after leading the team with 42 catches for 496 yards last season. Junior Griffin Norberg also had an outstanding camp at that position and saw significant time in 2016, making 17 grabs for 244 yards.

Freshman Deuce Larose, also a split end, has opened eyes in camp as an offensive standout. He could see playing time as early as Week 1.

Junior Jean Rene is getting healthy and is Valpo’s projected starter at slot receiver. He led the team in yards/catch with 14.6 during his sophomore season and hauled in a team-high five touchdowns. The second-team slot receiver position is a battle between sophomore Bailey Gessinger and freshman Donny Navarro.

On three-receiver sets, Parker Fox and JD Koehler will be utilized. Both are expected to see significant playing time.

“Jack Jarnigan has really emerged as one of the leaders on the offensive line,” Cecchini said. “He started all last year as a redshirt freshman, and he’s really become the anchor. We have a number of players on the line who have played a lot of football for us.”

Defensive Line
Fifth-year senior captain Jay Slone is back to start at defensive end after being slowed by injuries in 2016. Junior Jesse Studyvin, who will back up Slone, had an outstanding camp and could see time at multiple positions.

Redshirt sophomore Jake Trumpower is expected to start at defensive tackle, while sophomore James Reed will help shoulder the load at nose tackle early in the season as Tristan De La Rosa eases back in after an injury. Other players at those positions who impressed during camp include redshirt freshman Jordan Goebel, freshman Jeremiah Olojo and freshman Nathan Orlandini.

Linebackers
Junior Mike Wheeler is back at one outside linebacker position after notching 42 tackles last season. Sophomore Austin Petrie has focused his attention on defense after playing some running back during his freshman season. He has won the other starting outside linebacker job.

Wheeler will be backed up by freshman Josh Baker, while freshmen Gavin Twigg and Joey Poloskey are competing to be Petrie’s backup. Junior Gowan Baldwin could also see time as an outside linebacker.

Valpo boasts a pair of returning starters at the inside linebacker positions as Preseason All-PFL honoree junior Drew Snouffer is back after leading Valpo in tackles (102) and sacks (four) a year ago. Junior Nick Turner is also returning after totaling 54 tackles as a sophomore.

Other inside linebackers who could see time include freshman Laddie Skarecky, freshman Logan Pfizenmayer, redshirt sophomore Matthew Messler, junior John Regan and sophomore Tyler Newkirk, who has gotten noticed in camp after missing time due to an injury last season.

Defensive Backs
The Crusaders have experience at the two corner positions, with junior Jalin LeAndre and senior Brandon Riley expected to start.

At safety, redshirt senior captain J.J. Nunes returns for his final season of eligibility after missing the 2016 campaign due to an injury. He’ll be paired with Josmar Diaz-Martinez, who will start at the other safety spot.

“We’re really excited about our four starting defensive backs because they have significant experience,” Cecchini said. “Having J.J. back is huge; he’s a captain and knows his schemes as well as anybody. Diaz-Martinez is a tough kid who makes plays and generates turnovers.”

The corners will be backed up by freshmen Dilan Scargle and Cam Kelly, while sophomore Jamari Booker will back up at safety with freshmen Tramone Duncan and Julian Benavides also vying for time. Isaac Lane was expected to be in the mix, but was recently lost to a season-ending injury.

Sophomore Bailey Gessinger is Valpo’s return specialist after being one of three players in the FCS nation with two kickoff returns for touchdowns in 2016. Ryan Clarke is likely to start at long snapper.

The Crusaders open up the 2017 season on Saturday at Montana at 2 p.m. CT. Links to live coverage will be available on ValpoAthletics.com. The home opener will take place on Saturday, Sept. 9 against Duquesne at 1 p.m. CT at Brown Field.