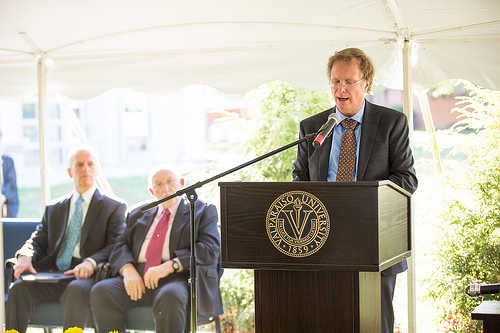 Regarded as an expert on solar energy research, Robert Palumbo '80, Ph.D., professor of mechanical engineering and Alfred W. Sieving Chair of Engineering at Valparaiso University, has achieved national recognition as the 2013 Indiana Professor of the Year. Palumbo is the third Valpo professor to receive this prestigious honor.

Sponsored by the Council for the Advancement and Support of Education (CASE) and The Carnegie Foundation, the United States Professor of the Year is the only national program to recognize excellence in undergraduate teaching and mentoring. Each year, the program honors the most outstanding undergraduate instructors in the country — those who excel as teachers and positive influences in the lives and careers of students.

"It is a fitting honor for Professor Palumbo to be recognized for his outstanding record as an educator," said Mark R. Schwehn, Ph.D., provost and executive vice president for academic affairs. "He is among the most effective, imaginative, passionate and devoted teachers I have known during my 40 years in higher education."

Nominated by faculty colleagues and University administrators, Palumbo is one of 36 nationwide to be selected for this recognition, from more than 350 top professors in the United States. Palumbo also received a recommendation from a former student who worked with him as an undergraduate research assistant.

"As a teacher, Dr. Palumbo was supportive and helpful while still maintaining high expectations of his students," said Leanne Reich '10, who is currently a doctoral student at the University of Minnesota. "I hope to emulate his teaching if I decide to become a professor. I am eternally grateful to him for starting me on the path of scientific discovery."

In addition to solar energy, Palumbo specializes in thermodynamics, fluid mechanics and heat transfer. He currently serves as the Alfred W. Sieving Chair of Engineering, which recognizes outstanding teaching and scholarly activity and promotes high standards of classroom instruction. He developed an innovative course at Valpo on radiation heat transfer that is the only of its kind at the undergraduate level in the United States.

"My ultimate goal as a teacher is to help Valpo graduate the kind of students who want to serve society," Palumbo said.

Palumbo's leadership was instrumental in the development of Valparaiso University's James S. Markiewicz Solar Energy Research Facility, which was dedicated in September 2013. This fall, the University was awarded a $300,000 grant from the National Science Foundation and a $2.3 million cooperative agreement from the United States Department of Energy to fund solar research.

The funding is a direct result of the Solar Energy Research Facility and Palumbo's vision for solar energy research at Valpo. It will allow undergraduate students the unique opportunity to participate in cutting-edge scientific research.

"Our students, faculty and staff will push forward the energy science frontier by participating directly in the international scientific conversation of how to use sunlight to produce solar fuels and valuable commodities," Palumbo said. "The Solar Energy Research Facility enables students and faculty to develop the engineering science required to build the technology that will substitute solar energy for fossil energy."

CASE and the Carnegie Foundation have been partners in offering the U.S. Professors of the Year awards program since 1981. Additional support for the program is received from Phi Beta Kappa, which sponsors an evening congressional reception, the Professional and Organizational Development Network in Higher Education and other higher education associations.

Palumbo holds a Bachelor of Science in Mechanical Engineering from Valparaiso University, a Master of Science and Doctorate in Mechanical Engineering from the University of Minnesota. He has also served as a senior scientist in 1997 and as head of the High Temperature Solar Energy Laboratory from 1998 to 2004 at the Paul Sherrer Institut, Villigen-PSI in Switzerland.

For more information about solar energy research at Valparaiso University, contact Nicole Niemi, director of media relations, at nicole.niemi@valpo.edu or 219.464.6010.