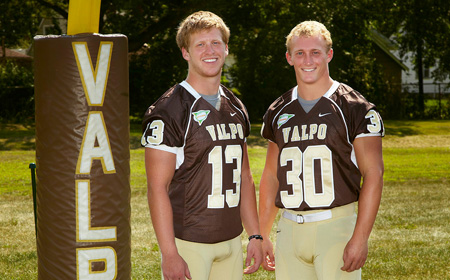 A new era in Valparaiso University football kicks off in 2010 as Dale Carlson takes over the helm of the program. Carlson inherits 39 returning letterwinners from last year’s squad, along with six starters on each side of the football. In addition, 37 freshmen have joined the program for the upcoming season, giving Valpo a roster of just over 100 as the Brown and Gold prepare for opening night.

With a new coaching staff in place and many new faces on the roster, position battles are taking place on both sides of the football. Underclassmen, in addition to the returnees, will all have the opportunity to make an impact on the 2010 squad.

Offense
Carlson looks to bring a high octane offense and lots of energy to Brown Field as the Crusaders battle to move up in the Pioneer Football League standings. A year ago Valpo finished 1-10 overall and went winless in the PFL, but Carlson has turned programs around at every stop he has made during his coaching career, including starting a pair of programs from scratch and eventually leading them to the national playoffs.

Backfield
A three-way battle heading into the start of the season at quarterback makes for a great deal of excitement under center. All three are redshirt-juniors, and all three saw action last season. Nate Goergen has been the most consistent quarterback throughout training camp, and is coming off of a 2009 campaign in which he completed nearly 50% of his passes. He finished the season completing 49-of-99 passes for 487 yards, while starting four games a year ago.

Matt Upshaw has recovered from an injury which occurred in the season opener in 2009, and returns looking to contend for the starting assignment as well. He knows the new offense, and is a very mobile quarterback, rushing 46 times over the first six games of his career for nearly 150 yards. Bobby Wysocki also is in the quarterback battle after starting six games one year ago. He threw for a team-high 783 yards while rushing for 237 more, and is overall just an excellent athlete.

The Crusader backfield will feature a one and two back set throughout the season. The running backs will get plenty of touches, both carrying the ball as well as running passing routes. Redshirt-sophomore Eddie Morelli and true sophomore Isaac Wildermuth both gained a great deal of experience in their first year on the field in 2009, and will look to improve a running game that was at the bottom of the PFL. Morelli had one of the team’s six rushing touchdowns a year ago while Wildermuth had 66 carries, second most on the team.

Carlson is still looking for a third consistent running back to emerge this season, with Chris Giehon, Josh Keatley, and Ryan Lehr all fighting to fill that spot.

Receivers and Tight Ends
The receiving game will be a key component in the Valpo offense with the new up tempo style of play. With the passing game being more of an emphasis, multiple receivers will get the opportunity to make big plays for the Crusaders this season.

At six-foot, six-inches, Sean McCarty is a big presence running routes. He can work both inside and out, and finished last season with 13 total grabs, including a pair of touchdowns. Tim Bennett has recovered after missing spring practice with an injury, and has had a great fall camp thus far. He finished second on the team with 27 catches last year for a team-leading 376 yards, averaging nearly 14 yards per reception.

Desmond Lewis has been the most consistent receiver over the course of both spring practice and fall camp, and will be a flexible receiver that is able to be used in multiple formations. He missed all of 2009 with an injury, but is looking to regain his freshman season form, when he made 17 catches. Ryan Myers will also be in the mix at receiver, finishing third on the team with 23 catches for 247 yards a year ago.

David Coneys and Travis Anderson will both battle for time at receiver as will Eric Slenk. Coneys led Valpo averaging nearly 20 yards per catch a season ago while Anderson hauled in five passes. Slenk is the fastest of the Crusader receivers, and is coming off of an outstanding spring season.

Valpo’s tight ends will play a key role in the passing game as well under Carlson, as they will be called upon to catch the ball while also still blocking. They too will be utilized in different ways, both in one and two tight end sets.

Mike Gerton, who played on the reserve team a year ago, can both catch the ball as well as block while Alex Petrik, who started the final seven games of 2009, is a tremendous blocker. Matthew Niehus will also contend for time in this position, as he was the only Crusader tight end to catch a pass last season. Freshman Kevin Becker has also impressed the coaches during fall camp, and will vie for time on the field in his rookie campaign.

Offensive Line
The offensive line will play a vital role in the new Crusader offense. How the front five hold up in pass protection and run blocking will go a long way in determining the success of the 2010 season. Honorable Mention All-PFL selection Nate Blair returns for his junior season to anchor the line at left tackle.

Juniors Gavin Grillo at left guard and Ferdinand Velez at center both started every game in 2009, and their leadership will also be relied heavily upon. John Moriarty, who saw action in five games last year, has worked hard in the offseason and will look to start on the right side along with Sean Cook. Bill Bodzianowski will add depth to the line in a swing role, spending time at both guard and tackle.

Defense Carlson’s defense will have the ability to play multiple formations this season, using multiple defensive fronts. The defensive line and secondary return a wealth of experience while the linebacking corps is more on the youthful side.

Defensive Line
For the defense to have success in 2010, the defensive line must be consistent and play well. The talent is there to both stop the run and pass, and now the Crusaders will look to prove it.

In the middle Brett Heber and Aran Boz look to lead the way. Heber is a hard-nosed individual who had 24 tackles a year ago, including 3.5 tackles for loss. Boz played well both in the spring and during fall camp, and will line up at the other tackle. Brian Laipple and Brian Plachinski, both of whom saw action last year on the front four, will also rotate in at the tackles.

Honorable Mention All-PFL selection Nikko Carson will man one of the defensive end spots this season. Carson led the Crusaders with 11 tackles behind the line of scrimmage a year ago, including registering five quarterback sacks. He finished with 43 total tackles.

Grant Bushong, who appeared in all 11 games in 2010, will also compete for a starting spot on the end. He had 12 tackles during his sophomore season. Sophomore Nate Atkins, who played with the reserve team, and Christopher Howard, a transfer from Butler who had to sit out last season, will also fight for time on the line.

Linebackers
The Crusader linebacking corps is a youthful group led by redshirt-sophomore middle linebacker Cody Gokan. Gokan made 39 tackles during his freshman season. He had a season-high 10 tackles at Marist late in the year, and will once again look to control the middle of the field.

Sean Graves and Patrick Wenzel appeared in eight games last year, but mainly on special teams. This year they will be called on for a regular role with the defense. Graves is moving from safety while Wenzel saw limited action at linebacker. Jared Rose, who redshirted last season, and Matt Heinen, who played on the reserve team, will also be called upon to step up at linebacker this year.

Carlson is looking for guys that are able to run at linebacker, and sees lots of prospects from the group.

Secondary
A wealth of experience returns in the secondary for the Crusaders heading into 2010. There is plenty of depth despite being with out Laurence Treadaway who is out with a knee injury. Eli Crawford finished third on the team in tackles with 56 last season, and was third in the PFL with four interceptions. He returns for his senior season at free safety.

Roger Satur, who had 53 tackles plus a pair of picks, also begins his senior season along with Alex Soller, who saw action in every game a year ago. Tyler Evanko will also see time at the safety position after moving over from a corner.

On the corner another strong rotation has developed for the Crusaders. Fifth-year senior Adrian Gober will lead the way while Alan Porter, Jr. and Chrision Rasberry will also see the field for a great deal of action.

Special Teams
As is the case with most teams, special teams will play a vital part in the Crusader success this season. Sophomore Greg Wood has stepped up during the preseason to earn the punting job for the first time in his career. Wood played on Valpo’s reserve team a year ago.

The place kicking is still up for grabs heading into the season opener. Chris Smith is the only kicker with experience, having appeared in nine games last season. He was 5-of-12 on field goal tries with a long coming from 47 yards out. Freshmen Mike Pando and Dean Reeves are also involved in the battle to win the kicking job.

Schedule
The 2010 season opens on Thursday, Sept. 2 as the Crusaders head to Macomb, Ill. to battle Western Illinois, a NCAA I-FCS scholarship program. Nine days later Valpo travels to Franklin before returning to Brown Field to play on campus under the lights for the first time in school history against region rival Saint Joseph’s (Ind.).

The Pioneer Football League slate opens on Sept. 25 as Drake visits on Homecoming weekend at Valparaiso. After a trip to Dayton, the Brown and Gold return home for three of the next four weekends, including a Senior Day tilt against Butler on Oct. 30 in the Battle for the Hoosier Helmet. The Crusaders then close the season on the road with back-to-back games at Campbell and Morehead State.

With so many new faces both on the field and on the sidelines in 2010, an exciting year of Valparaiso Crusader football is sure to be in store for the players, coaches, and fans. The 90th season of intercollegiate football at Valpo truly marks the beginning of a new era in gridiron action on campus.