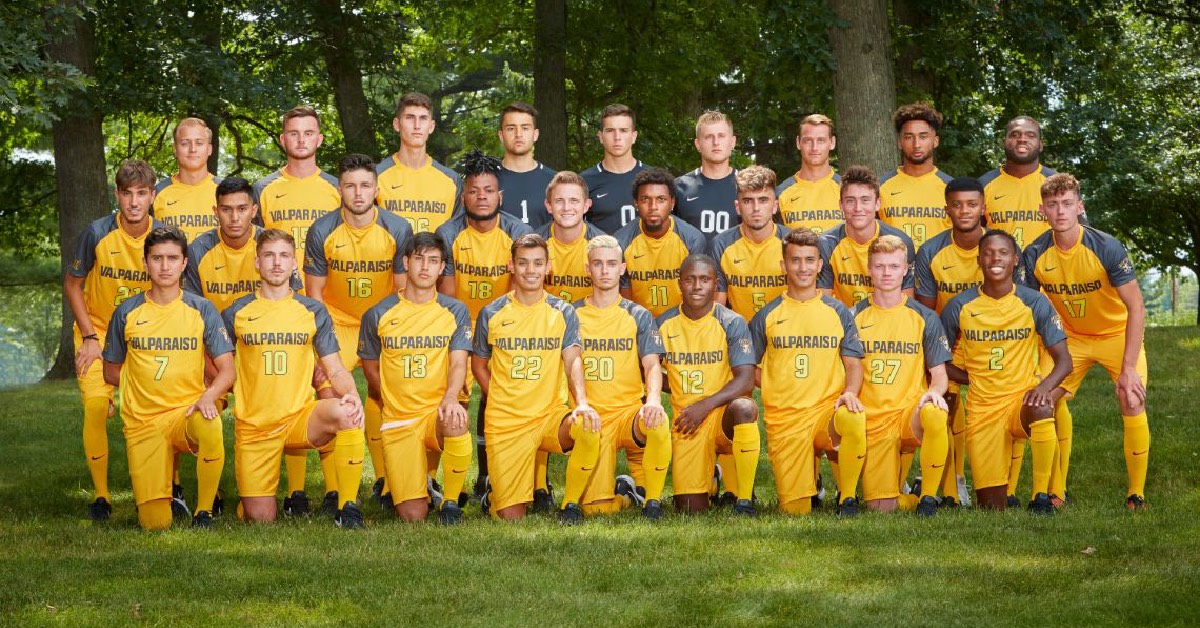 With the start of official practices right around the corner, the Valparaiso University men’s soccer team has rounded out its roster with eight additional newcomers for the 2019 campaign.

Head coach Mike Avery previously announced a mid-year transfer in January, four local players in mid-March, and two additional individuals with local ties in late March. In addition, Avery has stayed true to the program’s roots of bringing in talent from across the globe.

Jorn-Jan van de Beld (Balkbrug, Netherlands / University of Twente) is set to join the ranks of goalkeepers to come through the program. He joins Valpo as a graduate student this year. During Avery’s tenure, Valpo’s program has produced multiple professional goalkeepers and garnered several conference Goalkeeper of the Year awards.

“Jorn-Jan is a very interesting prospect for us who comes in at just the right time,” Avery said. “We have been fortunate with our goalkeepers over my time here, so whoever fills the gap left by Nacho Miras graduating and moving on to a professional contract in Spain will have some big shoes to fill. Jorn-Jan is a player who we believe will challenge to be that man. He is a very experienced and talented player from the Netherlands who is also a very good student. Jorn-Jan is a brave shot stopper who controls his box and organizes well, and he has aspirations to play professionally. Those are all attributes that appealed to us. Most importantly, though, we have a young man who very much buys into the culture of our team and fits Valpo.”

“We saw Lucas on his junior college team, and I was immediately on board with trying to bring him to Valparaiso,” Avery said. “Lucas is a busy, technical, and tactically-aware deep midfield player. He wins tackles and is not afraid of the grind necessary to win a college midfield, but has the calmness, vision and technical ability we like to help us maintain possession and build the game through the lines. Losing a player like Akeem Bradford is very hard with as much defensive work as he did for us the last two years, but we think Lucas has the ability to help us progress in that area while maybe even improving our possession.”

Forward Ryan Madondo (Franklin, Tenn. / Franklin Road Academy [East Tennessee State]) has joined the program as a transfer and will be a junior this season. He played in 20 games over the last two seasons at East Tennessee State after earning all-region, all-district, and all-state honors in high school.

“Ryan is another player coming to us who we believe has the ability to jump right in and help immediately,” Avery said. “He is an attacking player who can play as a striker or wide on the wings or in the midfield, depending on what shape we employ. Ryan has the combination of raw athleticism and a high soccer IQ, and he has the experience of playing in a good D1 program for the last two years at ETSU. It was clear on his visit that he is a strong character fit for our program, and he will have a great opportunity to contribute this fall. Once Ryan finds his comfort in the program, I think he will become a leader on and off the field.”

Madondo will have significant familiarity with one of his teammates right away as junior defender Dehai Abraham (Orlando, Fla. / Montverde Academy [East Tennessee State]) has also transferred from East Tennessee State to Valpo. He played in 14 games and had two assists in 2018 after also playing in 14 games and making eight starts as an outside back during his freshman campaign. Abraham helped Montverde Academy to three straight high school national championships from 2015-2017.

“Dehai adds a good level of Division I soccer experience to a relatively young roster,” Avery said. “He plays primarily as an outside back, which is what we think will happen for him at Valpo, but he can also play throughout the midfield if necessary. I like Dehai as an attacking fullback in our set up because he is a responsible defender, but he also has great ability when he goes forward. He passes well, can put in dangerous crosses, and is not afraid to go up and down the sideline. I spent a lot of time with Dehai on his visit to Valpo and am really excited to have him on the team. He carries himself in a calm and confident manner, and is really enjoyable to be around. Dehai will be a great teammate, and for us in recruiting, that is the highest compliment.”

Junior Ethan Norton (Danville, Ill. / Danville [Parkland CC]) joins the team as a junior college transfer after two seasons at Parkland. He appeared in 18 matches and made 14 starts as a freshman in 2017 before earning Second Team Scholar All-American honors while starting in all 14 matches he appeared in at defensive back in 2018. He was a junior college Second Team All-Academic honoree while earning a Region 24 First Team All-Region status. He was the Parkland Male Scholar Athlete of the Year, started in five of the team’s shutouts and accrued four assists.

“Ethan is a player who I am really excited about as he comes in with such a huge upside,” Avery said. “He is a left-sided player, which fills some need in balancing our roster, and is a very quick and athletic defender. I do think he will need some time to adapt to the style that we play, but he has all the tools to do so. Ethan is also a great addition because of what he brings off the field.  He is a very dedicated student, which is reflected in his grades, and with a little experience already at balancing a college academic schedule with participation in a sport, he will be a great role model for our many younger players on how you can be successful both academically and athletically.”

Freshman defender Vukasin Bulatovic (Elmwood Park, Ill. / Elmwood Park) has also joined the team this season, and he’s already no stranger to Avery and the coaching staff. He has significant club soccer experience with both the Chicago Sockers ECNL and with their USSDA team, and has also done some extensive training with Brett Hall and the Bridges group in Chicago.

“Vuk is a player who we became very familiar with through our VIP camp offerings as he came to a number of them over the past two years,” Avery said. “His desire to play college soccer was admirable, but his specific desire to play college soccer at Valparaiso is what really won me over. Vuk is one of those guys who just fit us. He is a very athletic player who is still coming into his own as a soccer player, which is not unusual for a young guy, but what is unusual is his dedication. If he stays patient while continuing to work as hard as he does, nothing Vukasin accomplishes will surprise me.”

Edvin Holst (Stockholm, Sweden / Viktor Rydberg Gynasium Jaraplan) comes in as a true freshman at the goalkeeper position this year.

“We are bringing in three goalkeepers this fall, and the competition for the starting job is wide open,” Avery said. “For most coaches that would be a cause of concern, but given the caliber of the three we are bringing in, I am really not worried at all. I believe we will be just as strong as we have always been in the goalkeeper position, and I think Edvin Holst will have a lot to say about it. Edvin is a talented player who carries himself very well in the goal. He is a very complete player and has great technique. His training habits are very good and I know he will be a positive addition to the goalkeeping crew. Edvin has quick reactions, is proactive and quick off his line, and we can play through him as we build. I’m very excited to have him join us this fall.”

Chavez Brooks (Kingston, Jamaica / Wolmer’s Boys School) is back with the program after one season away. He will be a sophomore in 2019 after making his debut in 2017 and seeing action in 13 matches while making 10 starts.

“We are excited that Chavez Brooks is returning to the team,” Avery said. “Chavez had some family items that needed his attention at home in Jamaica, and family always comes first with our program, so it was not a problem for us to let him step away for a season. Chavez is now welcomed back with open arms and he comes home to Valpo at a great time as we just graduated a handful of central defenders. We anticipate Chavez can slot right in and pick up where he left off.  Chavez had a very strong freshman campaign in 2017, was a regular starter and earned some conference recognition for his performance, and we will benefit from his experience, athleticism and presence. Chavez is very excited to be back with the team, and I think sometimes a year off can be a benefit in terms of the player’s perspective. He knows better than ever now what the opportunity he has at Valpo means, and that is a very positive thing he can share with his teammates.”

Valpo finished the 2018 regular season on a six-game unbeaten streak, the longest season-ending unbeaten streak in program history. The team placed third in the conference standings, the highest finish by Valpo in any sport since the University joined the Missouri Valley Conference in July 2017. Valpo finished the year with just one conference setback, the fourth time in program history that feat has been achieved.