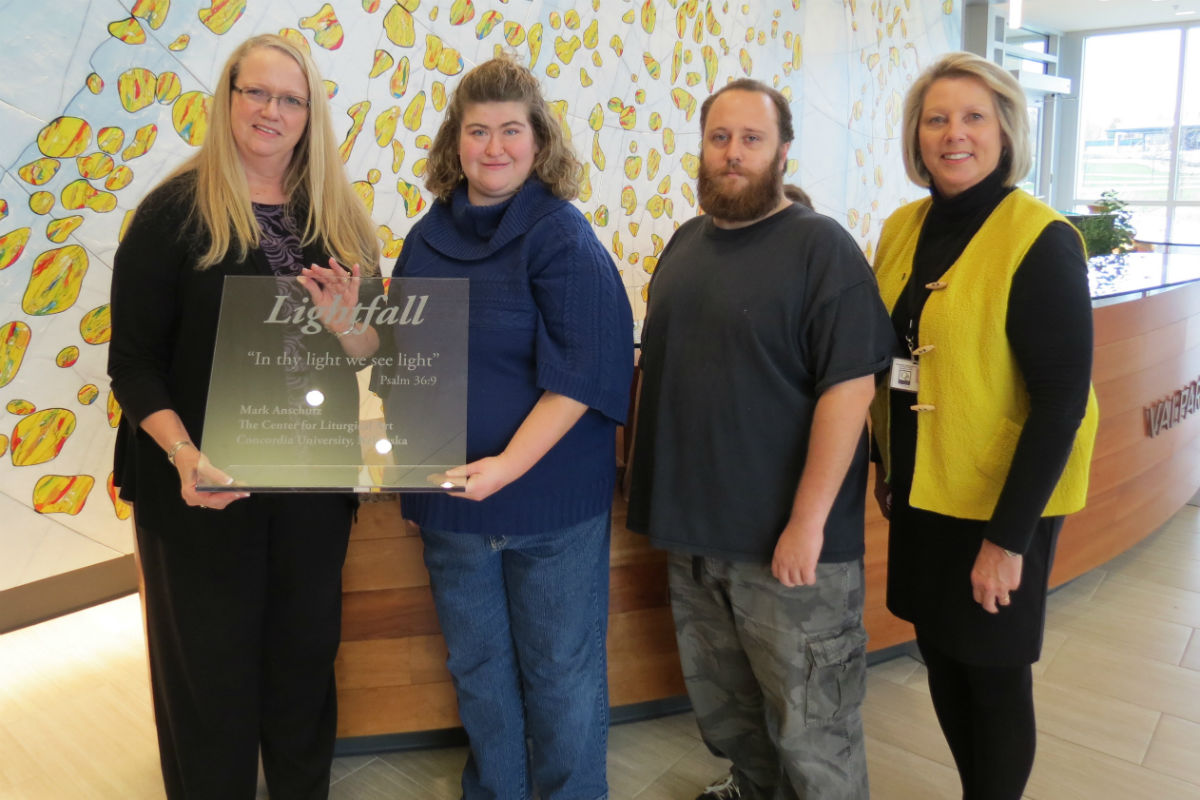 A pair of Opportunity Enterprises members are playing a vital role in the welcoming of visitors at another one of Valparaiso’s prized institutions, Valparaiso University.

The mural behind the reception desk at the campus’ fairly new Duesenberg Welcome Center is a spectacular work of art created by artist Mark Anschutz of the Center for Liturgical Art at Concordia University, Nebraska.

The mural, named “Lightfall,” features an array of hundreds of images of tiny pieces. Its goal, according to Barb Lieske, director of the Valpo Admission Network and Admissions Programs, was to capture the school’s motto, “In Thy Light, we see Light.” 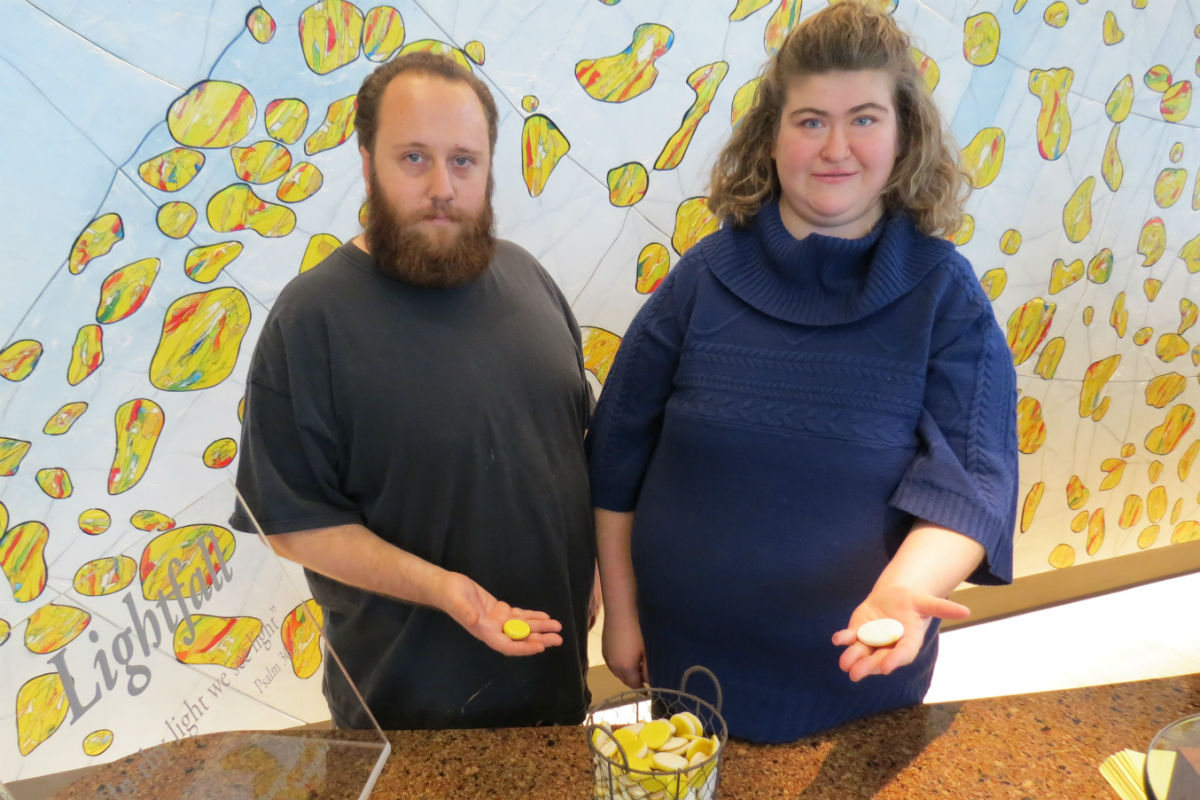 “The artist wanted people to walk away from here with a shape in mind, so he created bibelots, which are items of beauty connected to a particular memory or experience,” Lieske said.

So Anschutz chose to create several hundred of the small, yellow on one side, white with Valpo logo on the other, bibelots so visitors could remember the mural, and the Valparaiso University experience, positively. 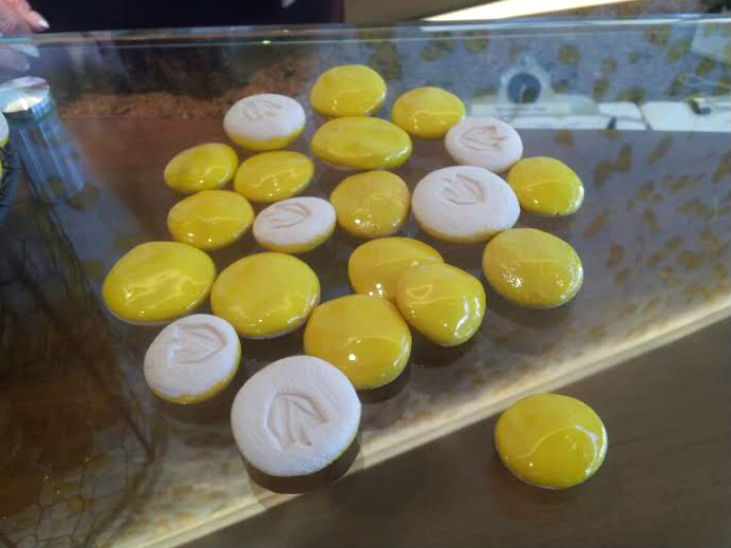 But the popularity of so many people coming through the doors led to the University running out of them. And instead of asking the Nebraska-based artist to come in or ship new ones, a suggestion was made that a local organization could make the items on their own and benefit from selling them to the University.

“We could provide the VU stamp to put on one end of the bibelot, but we wanted some local organization make them,” Lieske said. “Through an unrelated conversation with OE (Opportunity Enterprises), it was brought up that maybe some of the art members there could would on them. I immediately thought, ‘Yes,’ this will work.”

Five hundred have been made thus far by OE members Steven Johnson and Ashley Samahon. 250 have already been sent to VU with more to come on an as needed basis.

“We take some clay and roll it into a ball and use a presser to get it flat and then stamp the Valpo logo on the other side,” Johnson said. “(Producing) one usually only takes half a minute and we can usually get 30-50 done in an hour.”

“We do them fast,” Samahon added.

Carol Loesche, enrichment services manager at Opportunity Enterprises, said the partnership that benefits both the organization and University is almost like a happy accident.

“It was interesting how this started,” Loesche said. “One of our participants came here (to VU) on a sales call when it was suggested that we could do this. We like partnerships, but they are even better when they just pop out when we aren’t even looking.”

The producing of the bibelots has worked well for Johnson and Samahon, Loesche said.

“It’s fun for them and they always love trying something different.”

Lieske, who is one of the ones who hands off the students’ work to visitors coming from all over the world on a daily basis, says Johnson and Samahon are “doing a great job.”

“This keeps the funding in town and is great for their (OE) clients to see the work they are doing get shared at a major University, at the welcoming point no less.”

"For us it's great because Steven and Ashley have their work on display for prospective students and business people," Loesche added. "And with the diverse group of people that enters this building - who knows where these little bibelots wind up."

Johnson and Samahon will both have artwork featured at OE’s eighth annual ARTability Show, which is scheduled for Thursday, November 20 from 5:30-9 p.m. at Framing Concepts, 219 Broadway in Chesterton.

Register for the event here.