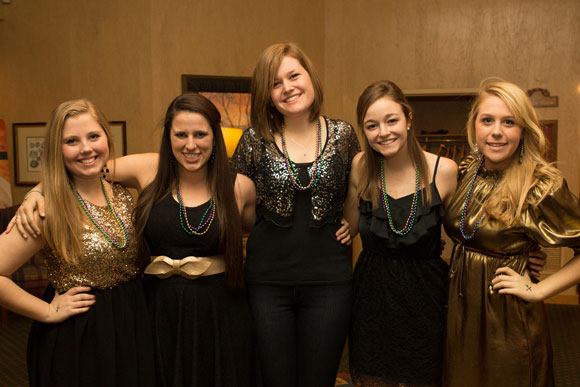 The National Panhellenic Conference, one of the nation's largest advocacy organizations for women, is recognizing the sorority community at Valparaiso University with its College Panhellenic Excellence Award. Valpo is one of only 14 colleges and universities across the country to receive this honor.

College Panhellenics comprise all sororities on campus and are scored on criteria including academic achievement, programming and community relations. The Panhellenic Council at Valpo, which includes five student officers, has been working diligently to align council operations with national best practices provided by the National Panhellenic Conference.

"I'm just really proud of them," said Carolyn Whittier, assistant dean of students for Greek life, leadership and volunteer programs. "The women on Panhellenic Council have embraced change and progress in a really positive way. They're excited to be role models on campus and to provide a positive experience for sorority women."

Whittier joined Valpo in 2012 and said it is exciting to see sorority women and fraternity men excel in all areas at Valpo — through undergraduate research grants, studying abroad, service-learning trips and numerous other leadership opportunities on campus.

In 2012, fraternity and sorority members at Valpo dedicated more than 10,000 hours to community service and donated more than $36,000 to local and national non-profits. The fraternities and sororities hosted their inaugural Dance Marathon in November 2012 to support Riley Children's Hospital in Indianapolis as its official community-wide philanthropy, raising more than $10,000.

"NPC received scores of nominations to recognize the outstanding work and achievements of undergraduate sorority women working together," said Nicki Meneley, executive director of the National Panhellenic Conference. "These awards are given to those who are following the exemplary standards of Panhellenic women."

The National Panhellenic Conference has recognized student-managed College Panhellenics in the United States and Canada with top honors for more than 50 years. This is the first time Valpo has won the award since 2001.

The fraternity and sorority community was also recognized at a regional level in February, receiving three awards at the Association of Fraternal Leadership and Values central fraternal leadership conference.

For more information about sorority and fraternity life at Valparaiso University, contact Nicole Niemi, director of media relations, at Nicole.Niemi@valpo.edu or 219.464.6010.