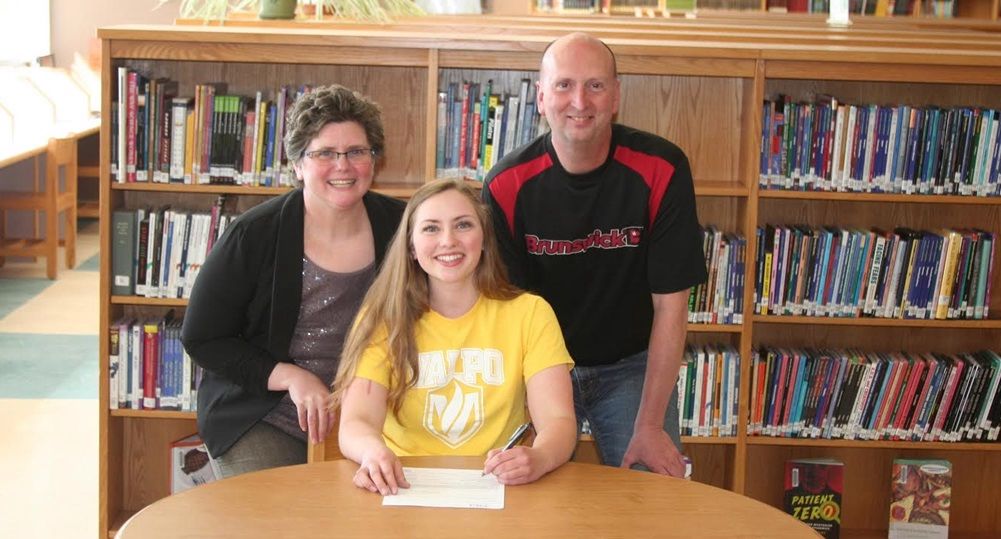 Bowling Signs Tryniski to NLI
Valparaiso University bowling head coach Matt Nantais announced today that Kendra Tryniski has signed a National Letter of Intent and will join the Crusader program as a freshman for the 2015-16 season.

“We are very excited to have Kendra joining us as a new Crusader next year - she is going to be a great asset to the program,” said Nantais. “She is an outstanding student as well as an accomplished bowler, one of the top female bowlers in the state of New York. She has proven that she can compete at the highest level and is looking forward to taking that experience even higher. I am looking for Kendra to come in and make an immediate impact on the team next season. She has all the qualities that every coach looks for.”

Tryniski, who comes to Valpo from Fulton [N.Y.] H.S., finished in sixth place at the New York State tournament in 2015 as a senior. An All-League and All-Section honoree, Tryniski led the OHSL in high game (279), high series (756) and high average (217) in 2015. She twice helped the Fulton squad to sectional titles and top-six finishes at the state tournament. A two-time Junior Gold qualifier, Tryniski won the New York USBC Adult/Junior State Championship in 2014 after finishing second in the same tournament a year earlier.

Beyond the opportunity for students, faculty, staff and Valparaiso community members to get together and celebrate the end of the school year, C4C raises funds and awareness on behalf of a specific cause. The 2015 C4C will benefit The 400 Movement, a charity designed to help bring mobility to 400 children in Afghanistan by providing prosthetic limbs, orthotic devices, mobility aids, prosthetic and orthotic repairs and adjustments. By helping these children gain movement, they are given the potential to achieve mobility in all aspects of life, which can lead to equality and justice.

As a partner in the 2015 C4C, men’s soccer will help promote the 2015 C4C while receiving the opportunity to provide each run participant with a copy of the #oneVALPO Promise.

“We were very happy to be approached by our SALT leaders and the organizers of the 2015 C4C about this potential partnership,” Avery said. “Our players love to jump on board with passionate people who are working to achieve goals and to make positive changes in our community and in our world because, in large part, that is what our program is all about. We are also very excited to have an opportunity to share our #oneVALPO Promise to a wider audience. I can imagine a lot of smiling faces at the end of the run, covered in all the colors of the rainbow, posing for a quick picture with a signed #oneVALPO Promise. The imagery works, and we couldn’t be more excited to be involved.”

Interested C4C participants can register by going to RaceIt.com and searching Color 4 a Cause, or by following this link: https://www.raceit.com/search3/event.aspx?id=31401. Registration prices are $30 for individuals and $25 for members of a team that consists of five or more people. All of the proceeds from the event support SALT's World Relief Campaign this year, The 400 Movement, which aims to raise $25,000 to purchase prosthetic limbs, orthotic devices and mobility aids for children in Kabul, Afghanistan.