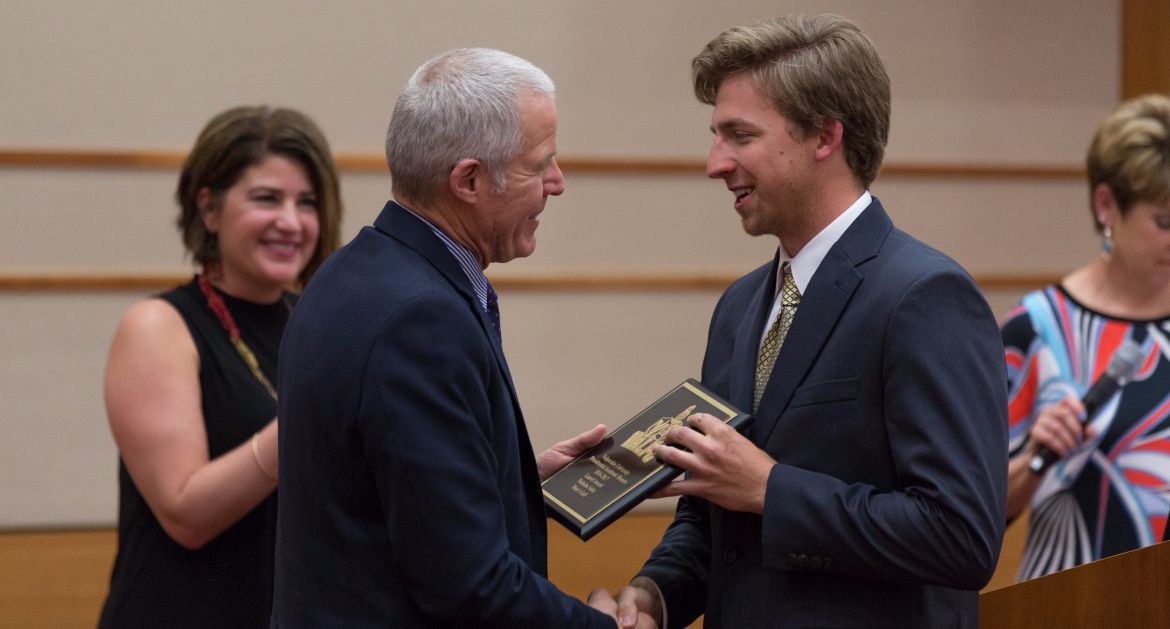 Presidential Academic Honors are awarded to student-athletes who have earned a cumulative GPA of 3.25 or higher after at least two semesters at Valpo.

Nick Seitz (Xenia, Ohio/Carroll), a member of the men’s golf team, was presented with the annual Laurel Award, honoring the graduating senior student-athlete who achieved the highest cumulative grade point average. Seitz is on pace to graduate in May with a perfect 4.0 GPA as a biology and chemistry double major.

Seitz was joined by 11 individuals who earned the Finishing at the Top honor this year, given to student-athletes with a cumulative grade point average of 3.9 or higher, including a trio of his fellow seniors –Vanesa Abad (Barrington, Ill./Lake Zurich), a nursing major from the women’s soccer team; Adam Bruno (Bloomington, Ill./University), a history and secondary education major from the men’s cross country and track and field squads; and Brian Lang (Chicago, Ill./Marist), an accounting major from the football team.

Sunday’s program featured remarks from President Mark A. Heckler and 1978 Valparaiso University alum Paul Thune, who was a member of the track and field squad during his time as a Crusader. In addition, senior student-athletes Kenny Floyd and Rachel Bruinsma shared remarks as well.

Women’s Tennis Falls to Wright State
The Valparaiso University women’s tennis team suffered a 7-0 setback on Saturday at the hands of the Wright State Raiders in Miamisburg, Ohio. The most competitive match of the day came at No. 3 singles, as Dao Sysouvanh (Sun Prairie, Wis. / Sun Prairie) took Wright State’s Haily Morgan to three sets.

Next Up
The Crusaders have Friday circled on their calendar, as they take on the Green Bay Phoenix at 2 p.m. at the Valpo Tennis Complex. Valpo beat the Phoenix 5-2 last year. Both teams enter the match seeking their first Horizon League victory of the season.

Valpo Concludes Road Slate with Win
The Valparaiso University men’s tennis team competed in its final regular season road match of the season on Sunday morning in Miamisburg, Ohio against Wright State. The Crusaders dispatched the Raiders 6-1, setting themselves up for the chance to secure at least a share of the Horizon League regular season title with a win on Friday against Green Bay.

Next Up
The Crusaders are set for their most compelling match of the season on Friday at 10 a.m. at the Valpo Tennis Complex. The Green Bay Phoenix will come to town for a battle of teams that have yet to lose in Horizon League play. The Phoenix are 3-0 and still have four league matches remaining, while Valpo is 5-0 with just two matches left. The Crusaders can secure at least a share of their second straight Horizon League regular season title with a win on Friday. The match is also a battle of each of the last two Horizon League Tournament champions.

Crusaders Fall to Norse in Series Finale
Trey Ganns hit three home runs, Northern Kentucky scored multiple runs in six of the nine innings and the Valparaiso University baseball team couldn’t slow down a powerful Norse lineup in an 18-7 loss on a windy Sunday afternoon at Emory G. Bauer Field. The Crusaders (12-17, 3-6 Horizon) still took two of three in the series after Saturday’s doubleheader sweep of the Norse (11-9, 6-3 Horizon).

Next Up
The Crusaders will head to Ball State on Tuesday to take on the Cardinals in a game that begins at 2 p.m. CT. Links to live coverage will be available on ValpoAthletics.com.

Crusaders Fend Off Northern Kentucky Rallies, Sweep Doubleheader from Norse
It wasn’t easy by any means, but the Valparaiso University baseball team pulled off a doubleheader sweep of Northern Kentucky at Emory G. Bauer Field on Saturday. Both games saw the Crusaders build sizeable leads, then hold on for dear life in exhilarating victories. Valpo picked up an 8-7 win in Game 1, before winning the nightcap 10-9.

Next Up
The Crusaders and Norse will round out the three-game set on Sunday afternoon with the first pitch slated for 1 p.m. Grant Inman is scheduled to pitch for Valpo, while Northern Kentucky sends Pat Kelley to the mound. The game can be heard on 95.1 FM Valparaiso, WVUR with David Horak providing play-by-play and Ethan Leach adding color commentary. Links to live audio and stats are available on ValpoAthletics.com.

Next Up
The Crusaders round out the road trip on Sunday at noon CT as they visit Wright State.

Men’s Tennis Stays Unblemished in Horizon League Action
The Valparaiso University men’s tennis team returned to form after having its 17-match winning streak halted last weekend, starting a new streak with a 6-1 victory over Northern Kentucky on Saturday at the Yeager Tennis Complex in Highland Heights. The Crusaders upped their record to 18-3 (4-0 Horizon), while the Norse plummeted to 5-6 (1-4 Horizon) with the defeat.

Next Up
The Crusaders will round out the road trip on Sunday as they visit Wright State for a match that begins at 9 a.m. CT.

Five Top Finishes Lead Valpo at DePauw Invitational
The Valparaiso University men’s and women’s track and field teams stayed in Indiana as they traveled to Greencastle for the DePauw Invitational on Saturday. The men’s team garnered four first-place marks, three coming in field events, while the women tallied one, which also came in a field event. The Crusader men finished in third with 96 points and the women ended the invitational in sixth with 46 points.