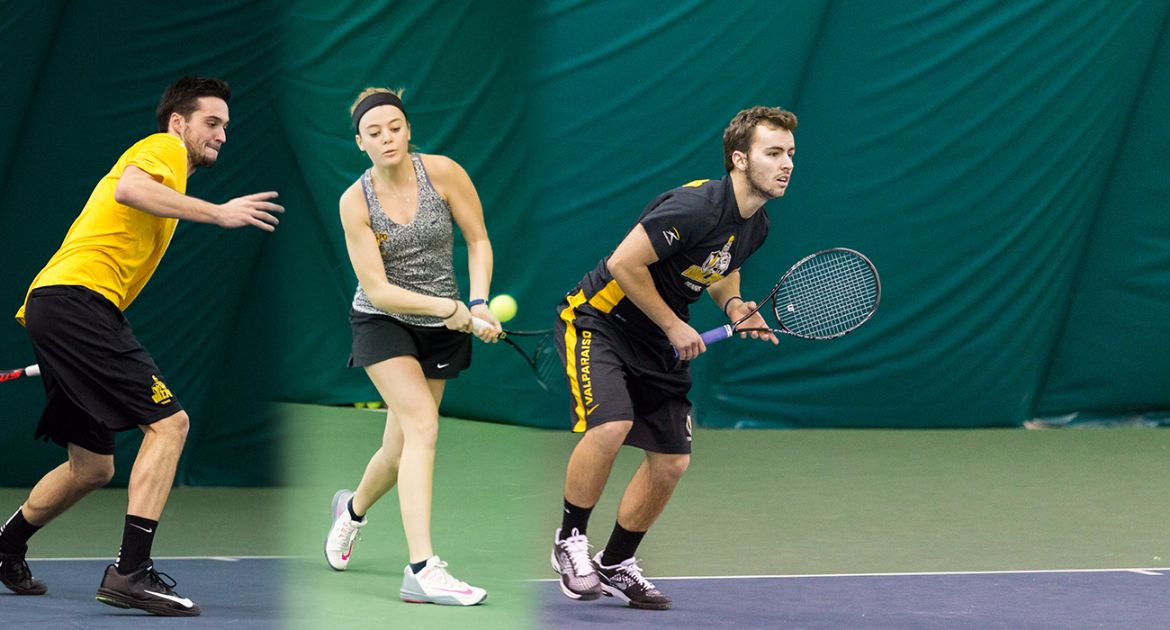 Hebble is graduating in three years with a degree in biology. She owns a 3.73 grade point average and plays No. 1 singles and No. 1 doubles for the Crusades. She and doubles partner Paige Heuer have won two Horizon League Doubles Team of the Week Awards this year. Hebble is a three-time member of the Horizon League honor roll.

Schorsch, a senior who holds Valpo’s program record for singles victories, owns a 3.87 GPA as a geology major. This marks the third consecutive season he’s earned academic all-league honors. Schorsch is a two-time Horizon League Player of the Year and was the 2016 ITA National Indoor runner-up alongside partner Charlie Emhardt.

Dunn, a senior biology and chemistry major, holds a 3.74 GPA and has been accepted into medical school at Iowa. A member of the winningest senior class in Valpo history, Dunn is tied with Schorsch for the team lead in singles wins with 24 this season.

Both Valpo tennis teams will be in action this weekend at the Valpo Tennis Complex for the final matches of the regular season. The Valpo women host Oakland on Saturday at 2 p.m. and Detroit Mercy on Sunday at 10 a.m., while the men will have one match, Sunday at 1 p.m. against Detroit Mercy.

Johanson Signs with Valpo Women’s Basketball
The Valparaiso University women’s basketball program has announced its newest addition as 6-foot-5 forward Nicole Johanson has signed to join the team for the 2017-18 season.

Johanson enjoyed a strong senior season at Herscher High School in Herscher, Ill., earning all-tournament recognition for all three of the team’s tournaments (Thanksgiving, Christmas and conference) on her way to achieving all-area and all-conference recognition.

“She has a strong desire to use her size to the best of her ability and to her advantage,” Valpo head coach Tracey Dorow said. “She recognizes what she can bring to our basketball program as a student and as an athlete. She has good hands and she can score. She sees that the potential is really limitless for her.”

Johanson finished her time at Herscher with over 1,000 career points.

“We think this is the place where she can grow and develop into the best player she can become,” Dorow said. “We love her raw ability. We feel like this is a great fit, especially given that we have some size in the program and she can learn from the players who are here.”

Johanson said the campus’s family atmosphere and the team’s personality are factors that helped make her decision to attend Valpo an easy one. She is from approximately an hour and 15 minutes away, giving her the ability to go away from home without going too far.

“I really like the coaching staff; they made me feel welcome when I visited,” Johanson said. “I like that Coach (Justin) Rees is my post coach. I believe I’m going to get a lot better because I’m going to be coached by him. Coach Dorow made me feel right at home at Valpo.”

Johanson, who has also thrived academically as an Illinois state scholar, plans to major in biology. She grew up on a dairy farm in Minnesota, then in eighth grade moved to a goat and sheep farm in Illinois. She plans to pursue an animal-related career.

Example Sports AAU coach Barry Bradford said Johanson epitomizes the word “potential” as a young senior who has the framework to become a quality collegiate basketball player at Valpo.

“Nicole is a skilled kid who can stretch the floor,” Bradford said. “She scores at the rim with both hands. She can stretch defenses and catch and shoot the ball. She has a really high basketball IQ. Nicole is a team-first person with an incredible work ethic.”

“I think the environment is right for Nicole,” Bradford said. “When she asked me about it, I told her we love Valpo. The Bradford family loves the opportunity that it has given our son to grow in more ways than just as a basketball player. We were able to tell her that without a doubt Valpo is a great place.”

Johanson was named the Most Valuable Player of an intense alumni game that her AAU program played against college players who have gone through the program.

“Judging by the level of talent that she played against that are already experienced Division I players, being the MVP of that game shows she can really compete at that level,” Bradford said.

Johanson is also part of a successful high school program, as Herscher finished the season 25-2.

“She’s very competitive with a strong desire to win and contribute however she can to the game,” Herscher High School coach Jen Savoie said. “She really cares about her teammates. She’s going to do very well at Valpo. I can’t wait to come watch her. I’m very proud of her for working hard to get there.”

“We’ve signed big classes the last couple years, and now this year we’ve signed five more kids,” Dorow said. “We just continue to add more and more depth to the program. We need that, because we’ve dealt with some injuries the last few years. That depth challenges the current players to get better and better. We’re at the point where our players are competing hard and nothing is given any more.

“I’m excited about adding more size, speed and toughness. The kids we have here have come a long way, now it’s about pressing them a little bit further. Everybody is enthusiastic about the group that’s coming in. They’re looking forward to trying to hold them off and keep their playing time, but at the end of the day, our players don’t care who gets the credit. They just want to go out there and get the job done and win basketball games.”

Valpo Football Set for Annual Spring Game
For the first time since the 2016 season came to an end, the Valparaiso University football team will take the field with a game day atmosphere at Brown Field on Saturday.

The annual Valpo football Spring Game begins at 11 a.m. The Crusaders will use a modified scoring system again this season with a format that pits the offense against the defense. New this year, the event will be divided into three contests.

First, there will be an offense vs. defense fourth-down contest. There will be 18 plays with the defense getting one point for each stop and the offense earning one point each time they move the chains. The second portion of the event will feature a red zone scrimmage, which will consist of six possessions with the offense needing to score 29 total points (including field goals and extra points) to win.

The final leg of the event will be the offense vs. defense scrimmage with a modified scoring system. The scoring system is outlined below.

Valpo head coach Dave Cecchini said freshmen and inexperienced sophomores will see the most snaps in the Spring Game in order to help them gain experience.

“We’re seeing how the players respond when it’s as hyped up of an atmosphere as we can make it during the spring,” Cecchini said. “We’ll find out who the gamers are out there. As a coach, you want to see both sides of the ball executing their schemes. Big plays that happen because of a mental error are bad. We’re hoping big plays happen because a guy makes a great play.”

The Crusaders have also emphasized improving the running game.

“We haven’t had a lot of big plays in the run game, but we’ve had a lot of efficient plays,” Cecchini said. “On the defensive side of the ball, we’ve done a good job taking advantage of any opportunities for interceptions. There have been very few chances for interceptions where we’ve dropped the ball. The overall pressure that we’re putting on the quarterback has improved as well.”

The Spring Game will be the third and final contact scrimmage for the Crusaders, who have already had two scrimmages with officials. The spring will conclude with one final practice on Monday, April 24.