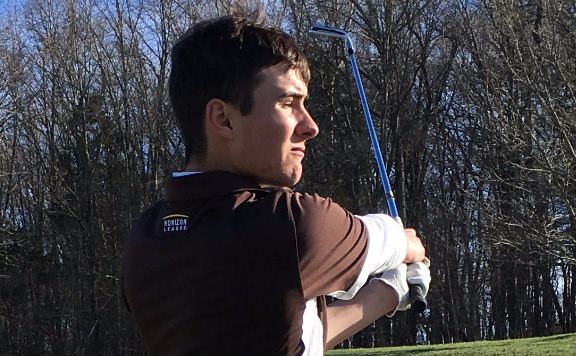 Crusaders Battle Horizon League Foes at Wright State Invite
The Valparaiso University men’s golf team continued a busy stretch of competition on Monday by beginning the Wright State Invitational. The Crusaders posted a 746 through two rounds and rank fourth in the six-team field.

Thoughts from Head Coach Dave Gring
"It took some time for us to adjust to the speed of the greens during the first round this morning. Our putting was pretty poor for the first nine holes, and that added to a lot of our bogeys to start the day. We're still missing too many opportunities to capitalize on close shots into the greens, but we are certainly working on improving that area of our game."

"The speed on our putts is still not where it needs to be and we need to do a better job leaving our long putts and downhill putts closer to the hole. The greens were fast today and our team scoring will continue to improve when we reduce the 3-putts and make more birdie putts."

"I continue to be encouraged with the gradual improvement in ball-striking this spring. We are hitting more fairways and greens and as we get the ball closer to the hole in regulation, the birdie production will improve."

Up Next
The Crusaders will partake in the third and final round of the tournament on Tuesday. It is scheduled to tee off at 9 a.m. CT. A link to live scoring is available on ValpoAthletics.com.

Valpo Sets Team Scoring Record, Holds on for Second-Place Finish
The Valparaiso University women’s golf team fended off host Fort Wayne by two strokes to finish in second place in the Fort Wayne Spring Classic at Pine Valley Country Club on Monday. In the process, the Crusaders posted the best 54-hole team score in program history. Katie Willenbrink (Mishawaka, Ind. / Penn), golfing as an individual, rounded out a strong event with a 77 in Round 3.

Up Next
The Crusaders will be back at it on Sunday, April 9 for the Crusader/Jaguar Challenge, hosted at the Trophy Club in Lebanon, Ind.