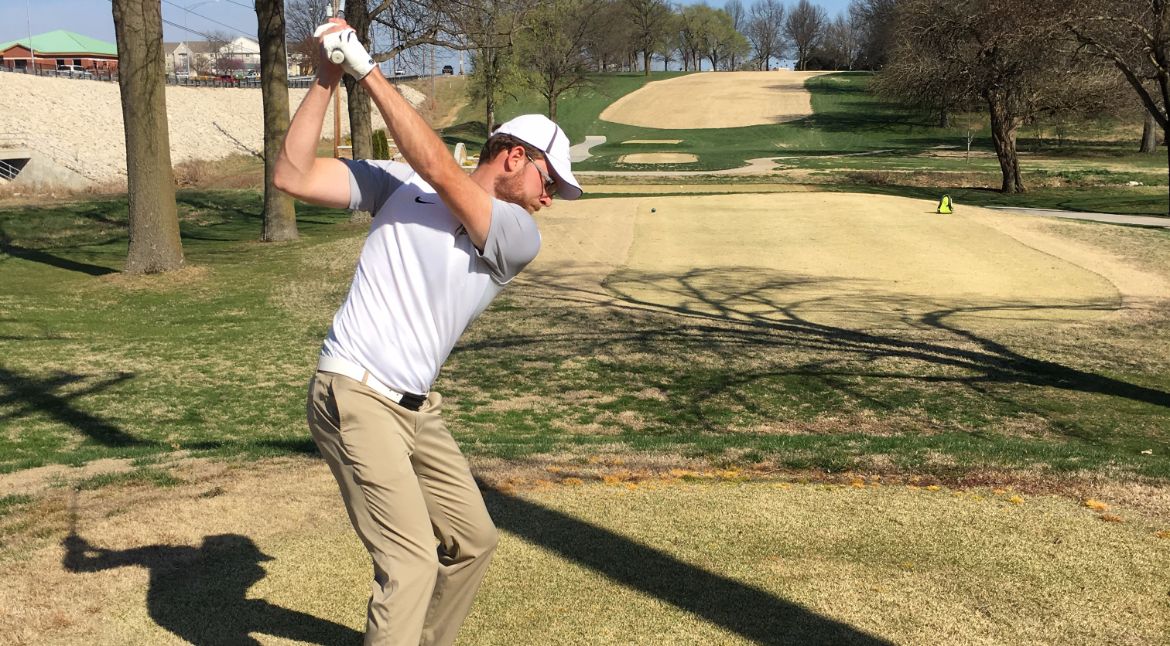 Webb won an event for the first time in his Crusader career, taking medalist honors at the Hoosier Invitational, which took place on Saturday and Sunday. He posted a 206 (-7), three strokes ahead of the nearest competitor in a 78-player field. He became the first Crusader to take medalist honors since September 2014. His 206 marked a career watermark and matched a 54-hole program record.

“It was a special day for Pete, and for his parents and brother to be able to watch and enjoy the individual victory was tremendous,” Valpo head coach Dave Gring said. “Peter drove the ball well all weekend, hit a lot of greens in regulation and got the ball close to the hole. When you combine that type of ball-striking and making a number of putts from 10-15 feet, it was the right combination for scoring low. Peter has worked on his game very diligently this spring and it is really paying off for him at this time.”

Webb led the event in Par 4 scoring at 3.79 and in birdies with 17. He posted a 65 in Round 1 of the event, matching the program record and establishing a career best for single-round scoring.

Webb followed by turning in another impressive performance at the Wright State Invitational on Monday and Tuesday, tying for third at 212 (-1).

This marks Webb’s fifth career weekly honor from the league office and his first this season. He most recently won the Golfer of the Week distinction on March 23, 2016.

The Crusaders (10-16, 1-5 Horizon) are scheduled to host Northern Kentucky on Friday in the home opener, Game 1 of a three-game Horizon League series at Emory G. Bauer Field. The first pitch is slated for 3 p.m. and can be heard on WVUR, 95.1 FM Valparaiso. Links to live audio and stats will be available on ValpoAthletics.com.

Crusaders Close Wright State Invitational with Team’s Strongest Round of Event
The Valparaiso University men’s golf team posted a 363 on the final day of competition, tied for the second-best Round 3 score in the Wright State Invitational on Tuesday. The Crusaders finished fourth in the six-team event with a 54-hole score of 1,109. The Crusaders finished six strokes behind Northern Kentucky and seven strokes in back of the host Raiders. Valpo finished ahead of Green Bay and Loyola.

Thoughts from Head Coach Dave Gring
"It was a very encouraging weekend with our tournament at Wright State on many fronts. First, our final round today was one of our best rounds and our best finish to a tournament all year. Secondly, we have improved our team score each round in three of our five tournaments this spring and in our last two tournaments. We emphasize playing better throughout the tournament and the guys are showing that this spring. Lastly, five of our eight players had their best tournament of the spring - Seitz, Wu, Kinsella, Cutler and Doherty."

"The tournament format was unique, scoring the best five out of six players. The format allowed us to showcase some of our depth and also have a good portion of the team competing. The weather today was challenging with temps in the mid-50s and wind gusts from 15-20 mph. The guys really played hard all day and the ball striking continued to improve as the tournament progressed."

"We played six rounds of competitive golf in the past four days and the two tournaments were a tremendous boost to our confidence. We know what areas we need to work on over the next 10 days prior to our next event. The guys are really hungry to keep competing and finishing the season strong."

"Our two captains led the way for us in this tournament and it was really good to see nine birdies and an eagle out of the two of them today. Both Nick and Peter continue to play with a lot of confidence and they are a terrific encouragement to the rest of the team."

Next Up
The Crusaders will hit the links again on April 14 as they partake in the Earl Yetingsmeier Memorial Invitational on Delaware C.C.

Crusaders Edge Redbirds in 12-Inning Marathon
It took longer than the regulation nine innings, but the Valparaiso University baseball team grabbed its first one-run win of the season on Tuesday night at Illinois State. A go-ahead bases-loaded walk by Chase Dawson (Andrean / Chesterton, Ind.) in the top of the 12th helped the Crusaders top the Redbirds 4-3 at Duffy Bass Field. The Crusaders prevailed in a battle of the bullpens that saw both teams go scoreless from the sixth through 12th innings.

Next Up
Wednesday’s scheduled game between the Crusaders and Western Michigan Broncos has been canceled due to field conditions and expected inclement weather. The Crusaders will open the home slate on Friday, April 7 at 3 p.m. against Northern Kentucky. The game can be heard on 95.1 FM Valparaiso. Links to live audio and stats are available on ValpoAthletics.com.

Crusaders, Phoenix Split League Twinbill Tuesday
Once the rain finally cleared up Tuesday afternoon, the Valparaiso University softball team was able to get in a Horizon League doubleheader with Green Bay at the Valpo Softball Complex – a series which was originally scheduled to be played in Green Bay. The Phoenix walked off with a 4-3 win in the opener, but the Crusaders rebounded with an offensive outburst in the nightcap for a 13-2 victory and a doubleheader split.

Thoughts From Head Coach Kate Stake
“Give credit to Green Bay – they came out of the gate strong today, hit the ball well and put us on our heels a bit right away.”

“Looking back, I think that there were some coaching decisions that we made in the first game that were not necessarily the best choices. Some of the decisions put us in tough spots, and we might have done things differently given the chance to do so again.”

“There were some adjustments our hitters needed to make to adjust to Rossmann in their timing and their mechanics that we weren’t able to figure out during the first game. Our hitters really did a good job putting their struggles from the first game behind them, making the adjustments and coming out strong right away in game two.”

“I felt like we really built off each other’s success at the plate in the second game, and maintained momentum offensively throughout the game. Kenzie really threw a very good game for us, and I thought Lanie did well defensively in center field, playing a position where she’s never even practiced.”

“We talked about the need to do a better job shutting the door after the second game. Whether we’re up 13 runs or one run, we need to play a better defensive final inning than we did in that game.”

Next Up
The Crusaders (18-10, 5-3 Horizon) are scheduled to close out the series with the Phoenix on Wednesday at noon from the Valpo Softball Complex. With inclement weather in the forecast, fans are encouraged to follow Valpo Athletics and Valpo Softball social media accounts for any updates regarding the rubber game.