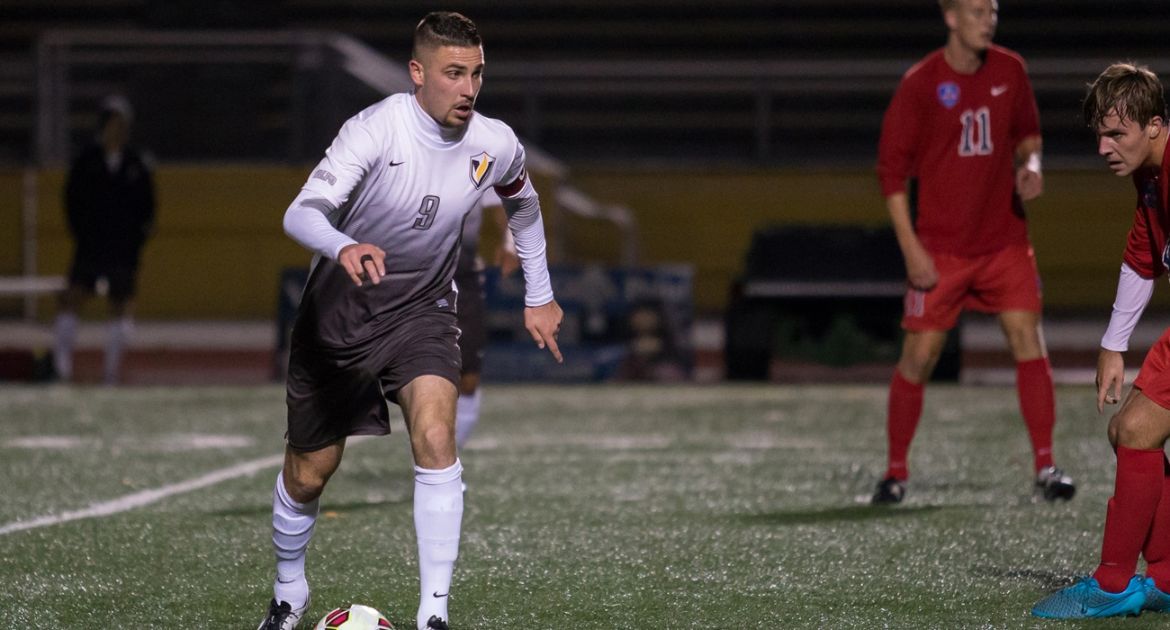 Aidoud Signs Professional Contract in France
Valparaiso University men’s soccer head coach Mike Avery confirmed today that 2015 Crusader co-captain Jordan Aidoud (Lyon, France) signed a professional contract last week with Jura Sud Foot. Jura Sud is based in Lavans-les-Saint-Claude in eastern France, and currently competes in Group C of the CFA, which is the 4th tier of soccer in France. Aidoud joins an impressive list of former Crusaders who have moved on to professional soccer following their graduation from Valparaiso.

“This is a great opportunity for Jordan, and I am proud of him,” said Avery. “He has worked very hard, improved during his four-year career at Valparaiso, and now has an opportunity to chase his dream of playing professional soccer. Jura Sud plays at a high level where many experienced top-level professionals are ending their careers while young professional players are getting their feet wet in French soccer. He will compete regularly against reserve sides from the biggest clubs in the country, which allows him a chance to showcase his talent and potentially move up in the future. Jordan is a classy player and I am confident that he will do very well in this next phase of his career.”

“I am excited to have someone with Shannon’s experience and background joining the Valpo Athletics family,” said LaBarbera. “Over her twenty-plus years in college athletics, she has developed a strong commitment to creating quality student-athlete experiences and truly cares about the success of all students.”

In her position at Valparaiso, Yates will be responsible for the management of all home athletic events. She will oversee an internship program in conjunction with Valpo’s kinesiology department. Yates will also serve as the sport administrator for women’s soccer, bowling and men’s golf, with secondary administrative responsibilities working with women’s basketball and softball as well.

“I would like to thank Mark LaBarbera and Michael Joseph for this incredible opportunity to embark on a new journey at Valparaiso University,” said Yates. “I am excited to return to working with collegiate athletes and the already-impressive staff in the athletics department. I look forward to becoming a member of the Crusader Family!”

Yates worked in the athletic department at North Carolina State from 1992 through 2012, working her way up to Assistant Athletic Director for Operations in her final two years, where she directed game operations planning for all NC State home team competitions and served as a member of the athletic director’s Intercollegiate Athletics Cabinet. Prior to that role, Yates spent 13 years as the Assistant Athletic Director for Varsity Sport Administration and Game Operations.

During her time at NC State, Yates served as the primary game manager for football, men’s basketball and women’s basketball home games and spent time as the sport administrator for a number of different sports for the Wolfpack. She also served as on a number of different committees, including chairing the Athletic Department Environmental Health and Campus Safety committee and the Gender Equity and Minority Enhancement NCAA Certification committee.

“Shannon is a true pro when it comes to operations and event management, and she has a keen passion for college athletics,” said Michael Kelly, Chief Operating Officer for the College Football Playoff and former Senior Associate Commissioner at the Atlantic Coast Conference. “It was a pleasure working with her during her time at NC State, and I know she will be a tremendous asset for the Valparaiso athletic department.”

Yates was also instrumental in the operations of numerous special events at NC State athletic facilities during her time there. She was co-chair of the local organizing committee for the NCAA men’s basketball tournament at PNC Arena and served as assistant tournament director for the women’s basketball tournament at the same venue. Yates served as meet director for gymnastics at the NCAA and conference tournament levels at Reynolds Coliseum and was director of event operations for a number of events at Carter-Finley Stadium as well.

Yates also brings to Valpo experience working at the conference and NCAA level. She was appointed to a number of ACC committees, including men’s and women’s basketball and football game operations and gender equity, while spending time serving as the chair of the conference’s softball and tennis committees. At the national level, Yates was designated an NCAA peer reviewer for West Virginia University and Middle Tennessee State University and also was a women’s basketball regional assistant in Connecticut.