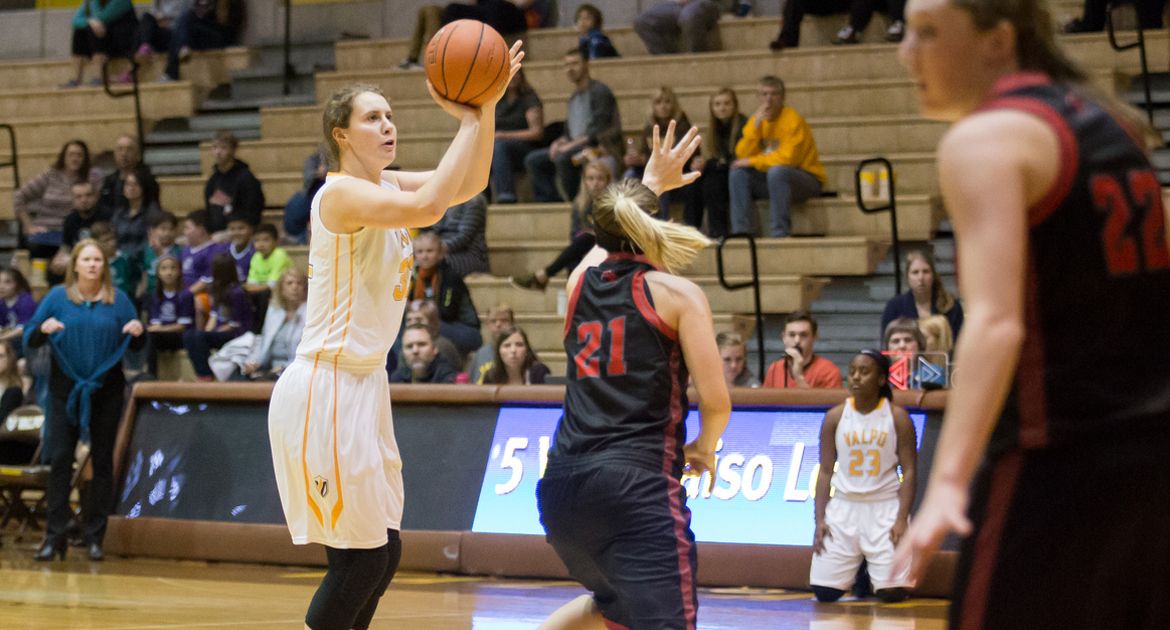 Thoughts from Head Coach Tracey Dorow
“I feel like we shouldn’t have put ourselves in that situation. We just didn’t make plays down the stretch, and I didn’t have enough timeouts to keep calling them and set things up. We need to be a little bit better executing down the stretch, and it would have given us a different outcome.”

On the turnovers: “The difference in the game was the 19 turnovers to their nine. We did everything else we could have done. We just needed to take better care of the ball.”

On Georgi Donchetz: “She’s done a tremendous job working hard to get herself in the best shape of her life. She’s a kid that plays with passion and a lot of energy. She’s always willing to do whatever it takes. She loves her teammates and loves to see them succeed. It’s obviously good for team morale to see her (playing well). She has a very high basketball IQ and knows what needs to be done. It’s always nice to have that leadership on the court.

On Sara Dickey: “She stepped up and hit big shots. She hit some tough ones, but she also hit some open ones. We’ve got to do a better job of knowing where the other team’s best player is at all times. I’ll give her credit, she made plays late in the game. We needed to get a couple more stops and the game is different.”

On playing Indiana and Illinois teams: “It’s nice that we don’t have to travel too far, and obviously nice to play regionally. Hopefully we’ll get more local fans. A game is a game, and we want to be better every single time we step on the floor. For us, the biggest goal is that we keep improving and learn from the things we didn’t do well and continue to do the things we did do well.”

Next Up
The Crusaders (3-3) will seek to bounce back on Saturday at 1:30 p.m. as they welcome Eastern Illinois to the Athletics-Recreation Center. The game will be broadcast on ESPN3, WatchESPN and the ESPN app. It can also be heard on Valpo’s flagship radio station, 95.1 FM Valparaiso. Links to live video, audio and stats can be found on ValpoAthletics.com.

Track and Field Announces 2016-17 Schedule Wednesday
The Valparaiso University men’s and women’s track and field teams announced their 2016-17 indoor and outdoor seasons schedules. The indoor season begins this Friday, Dec. 2 at the University of Notre Dame for the Blue and Gold Invitational, while the Crusaders will host a home meet at the Warren G. Hoger Track on campus for the third straight year on April 29.

The Crusaders take over a month break from the season opener at Notre Dame before resuming their season at Grand Valley State on Friday, Jan. 13. Continuing their indoor season at Fort Wayne (Jan. 21), they then revisit GVSU (Jan. 28) to end the meets for January.

The February portion of the schedule begins with splitting the men and women up at the North Central College meet in Naperville, Ill. The women compete on Friday, Feb. 10 and the men follow suit the next day, Saturday, Feb. 11. The last regular season indoor meet is at Horizon League foe Milwaukee on Friday, Feb. 17. The Horizon League Championships will be held on Saturday and Sunday, Feb. 25 and 26 at Youngstown State University.

The lone home meet for the Crusaders happens on Saturday, April 29 at the Warren G. Hoger Track. The Horizon League Outdoor Championships will be held at Youngstown State University (May 5-7).