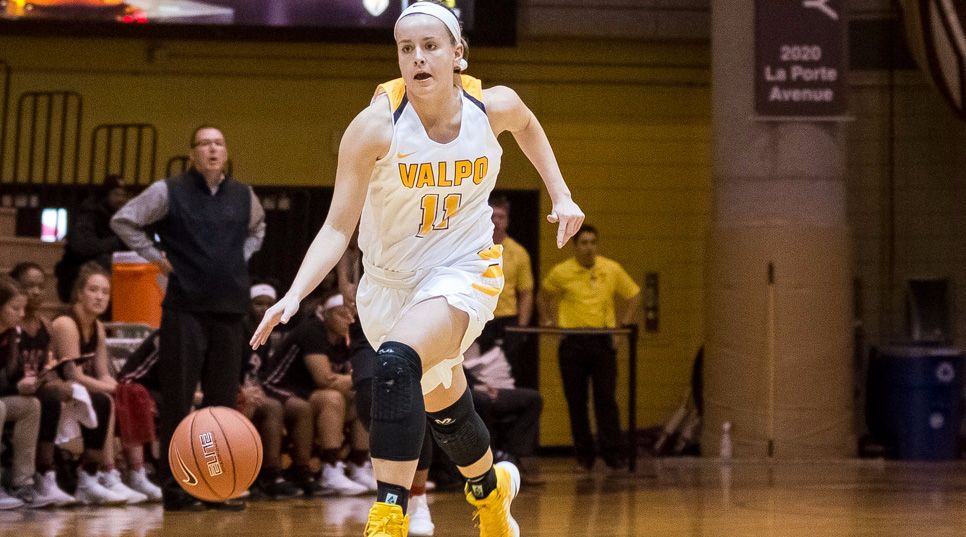 Women’s Basketball Team Drops Road Contest at Indiana
The Valparaiso University women’s basketball team fell to Big Ten foe Indiana 87-58 at historic Assembly Hall in Bloomington, Ind. on Sunday afternoon. The Crusaders were once again led in scoring by Dani Franklin, who posted 18 points. The fourth quarter was a bright spot, as the Crusaders outscored the Hoosiers 26-15.

Next Up
The Crusaders (5-5) now have some time off for final exams this week. They return to the court on Monday, Dec. 19 against Bradley (2-6) at 7 p.m. at the Athletics-Recreation Center. The game can be seen on ESPN3, heard on 95.1 FM Valparaiso and followed through live stats. David Horak will have play-by-play, with Renee’ Turpa handling color commentary. Links to all coverage will be available on ValpoAthletics.com.

Thoughts from Head Coach Tracey Dorow
“I was really proud of the way we moved the ball better. I thought we turned the ball over more than what we wanted to see, but a lot of the mistakes we made were being aggressive. I’m a little bit disappointed in our field-goal percentage for that first quarter. I thought we would shoot the ball a little bit better today, but at the same time I feel like we played hard. We did a lot of good things. It’s nice to come out with a win.”

On the start: “We talked about not settling for 3s. I thought we took too many 3s because they didn’t have much size inside. I’m proud of the effort we had. We pursued the ball relatively well, and we talked about the times we didn’t. We’ve got to do a better job going into tomorrow.”

On the first nine game of the season: “I think we’re battling. It’s hard because you go from traveling on the road, to home, to road and we’re getting ready for exams. It seems like it’s been a really tough stretch for us as far as the date and time of the games. At the same time, I think it’s going to help us settle in and do the things we need to do. All this is to prepare for the Horizon League. It’s done what we wanted it to do. We’re playing some really good opponents. Grace is going to do a really nice job all season and they’re going to have a great year.

Next Up
The Crusaders (5-4) will hit the road on Saturday evening and return to the court on Sunday at 1 p.m. Central Time against Indiana at Assembly Hall in Bloomington. The game will be available via BTN Plus (subscription only) and can be heard on Valparaiso’s flagship radio station, 95.1 FM Valparaiso. Jordan Morandini will have the radio call, with Brandon Vickrey providing color commentary. Links to live video, audio and stats will be available on ValpoAthletics.com.

Davy will assist Jon Haas, who was hired as head coach earlier this month. After a strong prep career at Lake Central High School, Davy was a member of Valparaiso’s first women’s golf recruiting class when she joined the program for the 2010-2011 season. She played one season under Mike Higdon and three years under Mat Blair before graduating from Valpo in 2014 with a degree in marketing and management.

In the summer of 2011, Davy competed as an amateur in the LPGA Future Tour South Shore Championship.

During her time at Lake Central, Davy was a two-time state qualifier and an all-conference player all four years.