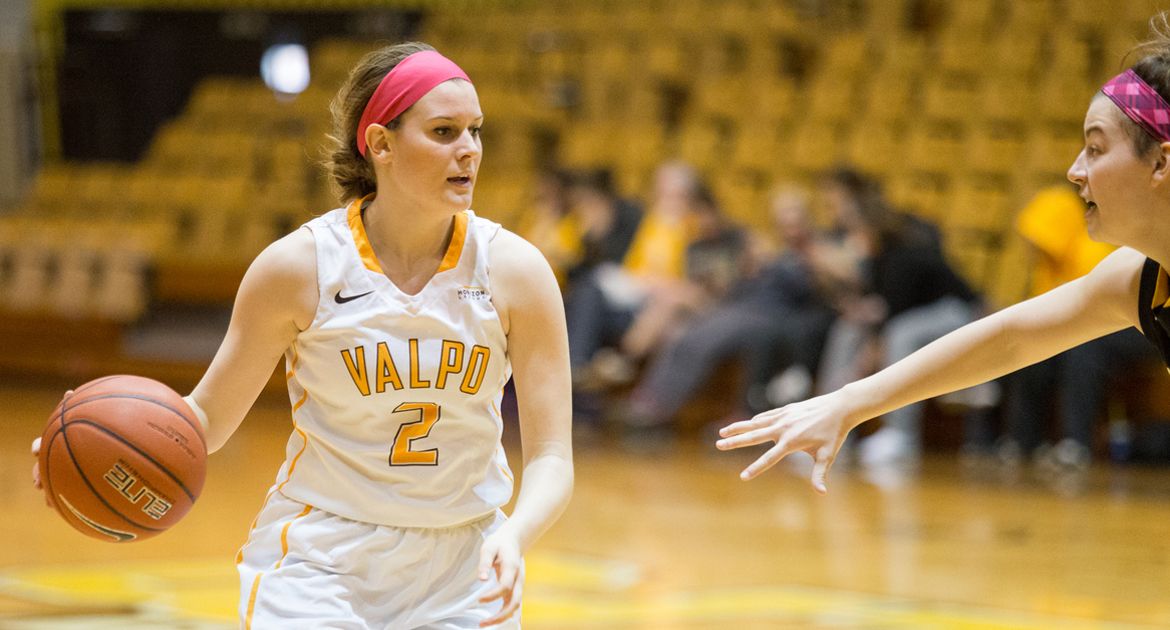 Crusaders Fall to Braves in Nonleague Finale
Four Valparaiso players scored in double figures on Monday night, but the Crusaders dropped the nonleague finale at the hands of Bradley 67-56. Meredith Hamlet (McBain, Mich. / McBain) led the Crusaders in scoring with 13 points, while Grace Hales (Cromwell, Ind. / Westview) achieved a career best with 10.

Next Up
The Crusaders (5-6) will enjoy nine days away from game action before returning to the court following the Christmas holiday. They crank up conference play on Dec. 29 at Detroit. The Horizon League lidlifter will tip off at 4 p.m. and can be seen on ESPN3, WatchESPN and the ESPN app. Live audio will also be available with David Horak and Brandon Vickrey providing the hometown call. Links to audio, video and live stats will be available on ValpoAthletics.com.

The Crusaders begin the spring campaign on Jan. 14 as they travel to Kalamazoo, Mich. to clash with Western Michigan. The Broncos went 19-8 last season including a 10-1 home mark and reached the championship match of the Mid-American Conference Tournament.

The first home match of the year occurs on Jan. 21 as Valpo welcomes DePaul to the Courts of Northwest Indiana. The Blue Demons went 14-8 overall and 6-0 in Big East play a year ago, eventually falling to Xavier in the Big East championship match.

Valpo ventures to the University of Indianapolis for a two-day event Feb. 10-11. They play the host Greyhounds on Feb. 10 before doing battle with Dayton on Feb. 11. After a Feb. 18 match with Evansville at Lakeland Tennis Academy, the Crusaders come back home for indoor showdowns with IUPUI (Feb. 24) and Akron (March 4).

A road tilt against Bradley on March 5 precedes the team’s spring trip to Los Angeles, which spans March 8-13. That journey will include matches against California Lutheran University (March 10) and the University of California – Riverside (March 11).

Horizon League play cranks up with the Ohio swing as Valpo visits Youngstown State on March 25 and Cleveland State on March 26. The Crusaders will welcome UIC on April 1, a match scheduled to take place outdoors at the Valpo Tennis Complex, weather permitting.

After a two-match trip to Northern Kentucky (April 8) and Wright State (April 9), the Crusaders round out the regular season with a string of five consecutive home matches as they entertain Green Bay (April 14), Milwaukee (April 15), Chicago State (April 18), Oakland (April 22) and Detroit (April 23).

The Horizon League Championships will be held from April 28-30 in Ann Arbor, Mich.

Youngstown State has won the Horizon League each of the last three seasons. The Penguins notched a thrilling win over Wright State in last year’s Horizon League championship.