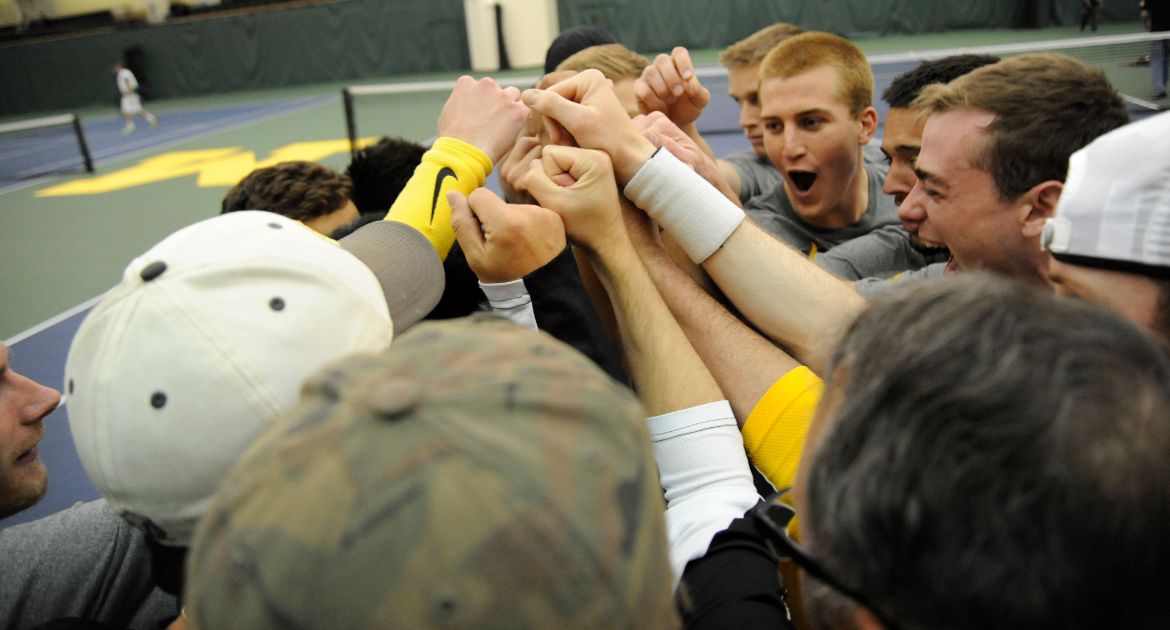 Men’s Tennis Preview: Valpo Set to Embrace High Expectations as Defending League Champs
As longtime Valparaiso University men’s tennis coach Jim Daugherty prepares for the start of the 2017 spring season, he finds himself in territory that is simultaneously familiar and uncharted.

The expectation of success has carried over from last season, along with many of the top names on Valpo’s loaded roster. But for the first time in program history, the Crusaders enter a season coming off an NCAA Tournament berth and a league championship.

Valpo is the outright preseason pick to win the Horizon League, also a first. In fact, the Crusaders swept all seven possible first-place votes in the preseason poll.

“I do feel a little bit of pressure in that as a coach, I don’t want to let my team down,” said Daugherty, who has been in charge of the program since 1985. “With the amount of talent that we have on this team, I want to make sure our players aspire to be the very best they can, and as a team we aspire to have the best national ranking. It’s about having the right expectations going into practices and matches.”

The program’s consistent climb in recent years has it poised for what figures to be another new apex in 2017. Valpo has shattered the school record for wins each of the last three seasons.

The Crusaders went 22-6 overall and 6-0 in the Horizon League last year, breezing through the league tournament with 4-0 wins over Cleveland State and Green Bay before a 4-1 defeat to No. 14 Northwestern in the NCAA Tournament.

The spring was a tough act to follow, but the Crusaders provided quite the encore during a productive fall campaign, capped by the well-documented run to the USTA/ITA Indoor Intercollegiate Championships by doubles players Jeffrey Schorsch (Perrysburg, Ohio / Perrysburg) and Charlie Emhardt (Carmel, Ind. / Carmel).

“In the fall, we had really phenomenal doubles results, and not just Charlie and Jeffrey,” Daugherty said. “All the way down our lineup, we were playing good doubles. That is really key to getting off to a good start and gaining some momentum going into the singles matches.”

Schorsch and Emhardt enter their senior seasons as the two most distinguished players in program history. After their Cinderella run to the national indoor finals that featured an upset of the No. 2 team in the nation, the duo begins the spring ranked 17th in the country.

Schorsch and Emhardt are the top two players in Valpo history in both career singles victories and career doubles victories. Schorsch is the two-time defending Horizon League Player of the Year.

“The work ethic of the freshmen has been phenomenal,” Daugherty said. “Sometimes it’s difficult for freshmen to come in and handle the amount of work and time that goes into getting better. They’ve faced all of those challenges, and passed them with flying colors. As a result, I see the improvement. The younger players know we have a strong senior class, so they know they need to step it up.”

That talented quartet of seniors is comprised of Bacalla, Emhardt, Schorsch and Kyle Dunn (Fond de Lac, Wis. / Fond du Lac), a group with lofty goals for its final go-around in collegiate tennis. The taste of the NCAA Tournament a year ago left them hungry for more.

“Fortunately, the vibe of the senior class is excitement,” Daugherty said. “They’re still carrying a very strong work ethic. That’s obviously infectious to the whole team. There’s a sense of, ‘We want to do something big. We want to do something special here.’ That’s the way they carry themselves every day.”

Brian Pecyna (Glen Ellyn, Ill. / Homeschooled) is a redshirt freshman after sitting out a year ago, while Garrett Gardner (Poland, Ohio / Poland) is back for his junior campaign after collecting 19 singles wins a year ago. Gardner tied for the team lead in singles wins during the fall season with eight.

The start of the season presents the Crusaders with two of their toughest tests of the year. They visit Toledo on Jan. 21 and Wisconsin on Jan. 28.

“Toledo is usually hovering near the top of the Mid-American Conference,” Daugherty said. “It will be a nice way to start and see where we’re at. The following week, Wisconsin looks to be our biggest test. Early on, we’re going to get a really good opportunity to see where we stand.”